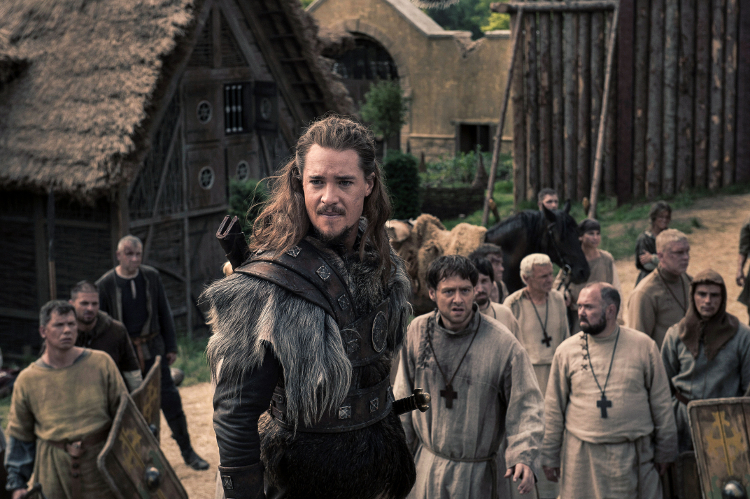 We Talk The Last Kingdom With Alexander Dreymon

It seems like Bernard Cornwell has spent two years reminding people that there are “no dragons” in The Last Kingdom. The hit adaptation of Cornwell’s Saxon Stories, The Last Kingdom, has suffered many comparisons to both historical and fantasy television. But The Last Kingdom is blasting its way to the forefront, leaving the tired old tropes of historical television in smoke and ruins; from its complex cast of men of state and church, to the superb female characters, to the stunning cinematography and authentically gritty portrayal of medieval daily life. Nor does The Last Kingdom centre on soap operatic portrayals of the privileged nobility, it tells of the shaping of England by King Alfred the Great; a king who is worthy of his title, according to Alexander Dreymon, who plays protagonist, Uhtred of Bebbanburg.

“I do,” Alexander agrees when asked if Alfred deserves the appellation The Great. “And as Uhtred, yes, definitely. Even though there’s a lot of frustration between the two characters and a lot of misunderstandings there’s still a lot of mutual respect and I’ve always seen it a little bit as a bromance, you know, there’s kind of a love story going on between those two guys. They both hate each other and they both know that they need each other to get to where they want to go.”

Alexander, who is in Australia celebrating the DVD and Blu Ray release of Season 2 of The Last Kingdom, is clearly passionate about his character and the historical background of the series. Anthony Hopkins has said he prefers to work strictly from the script when working on adaptations, and Michael Gambon refused to read the Harry Potter books while filming so he wouldn’t be second guessing the director, but Alexander Dreymon is inspired by both the history and Bernard Cornwell’s interpretation of it.

“For me the research part is very important, and sometimes it’s not always easy to find the right source for that kind of information,” Alexander told us. “But with the books it was just all handed to me on a silver platter. It made it a lot easier, and informed the character, and the books were definitely the biggest building blocks. In terms of script, it does happen every now and again, I read things in the books I am really looking forward to, and then they don’t end up being in the script. I think that’s a frustration I share with a lot of hardcore fans of the books. But it’s important to remember that the series is not the books, and everything that’s in the books cannot end up in the series. It’s a different medium and we have so much less time.”

Season one introduced us to Uhtred as a boy, second son of Ealdorman Uhtred, Lord of Bebbanburg. Uhtred was captured by Danes after his father was killed in battle, and taken as a slave by Ragnar the Fearless. Ragnar grew fond of Uhtred and eventually raised him as one of the family. Caught between two worlds, two cultures, the Viking one based in a tradition and religion that honours battle, and the Christian Saxons, that were supposed to favour peace, we asked Alexander whether Uhtred believes in the old Gods of the Danes, or the Christian God of the Saxons, neither or both, and whether he can reconcile the two conflicting cultures and beliefs?

“Certainly not the Christian God, he’s still very much a believer in the Norse Mythology, of the old Gods, that’s a source of constant conflict between him and Alfred, who doesn’t understand why Uhtred doesn’t want to convert to Christianity.” says Alexander. “He is a Dane at heart and he always remains a Dane, but he by necessity fights on the side of the Christians, he’s always conflicted about that.”

From Excalibur to Anduril, there is a great tradition in literature of swords that carry names, and somehow through that embody the hopes and aspirations of those who follow the champions who wield such renowned weapons. As we haven’t yet read the books (we usually read the books or watch the show at separate times to avoid both disappointments and spoilers), we asked Alexander about the name of the famous sword that Uhtred carries, with its weight of amber in the pommel, and he was happy to answer our somewhat nerdish questions.

“The small one is called Wasp Sting and the big one is called Serpent Breath. Once I was at a fan Q&A and the first question I got from someone who was an avid fan – and it was quite an annoyed question, you could see there was a lot of frustration there – she asked when are you going to name your swords? You know that’s something that works in the books, you can write about that, but on film it can seem kind of douchey “Yeah, taste some Serpent Breath”, you know?”

Continuing with the geeky interest in the technical details of weaponscraft, I put it to Alexander that amber would be both too soft and too brittle to use as a sword pommel. Does the prop sword have amber in the pommel, or is it glass or plastic instead? Somehow he managed to fence around the question.

“We have a few swords. We have a metal sword, a really heavy sword, the edges are blunt but it’s a heavy tool. For the fighting scenes, for security we can’t use the heavy metal sword so we use plastic swords. They are still very heavy plastic, and they feel very real, but they’re obviously not as heavy as the metal ones. We do have quite a few swords, for sword changes, pieces do get broken off during fighting.”

On whether he thinks people have changed much since the 9th century, Alexander comments:

“Very interesting question, I’d say not that much to be honest. Well, first of all, we just reconstruct what we think we know, we don’t have much to refer to. We have log books that say “in the year 878 there was a big invasion, there was much fighting and much bloodshed” and that’s it, and you kind of have to make up everything that goes around it. There weren’t many people who wrote during that time, especially on the side of the Danes, so you do make up a lot of the story around it. People are essentially very similar, and obviously we have a bit more self-control and a few more laws. It’s the same thing with the stories, the stories are still the same as they were back then, you know?”

There are a lot of historical series that lay claim to having ‘strong’ female characters, but continue to pander to the worst stereotypes. The Last Kingdom really smashes through those conventions. How does Uhtred’s character, who never lacks for female companions, develop through his relationships with such a complex group of women?

“I think there’s a lot of respect for the women in his life, especially women like Brida, who are bad ass and feisty, and warriors as fearsome as many men in those times,” Alexander says. “I think you can see in the first season and the second season, Uhtred always needs women in his life, and his wife, Gisela, who is his companion for the whole of the second season and is extremely important to him; as a companion and also as an advisor.” 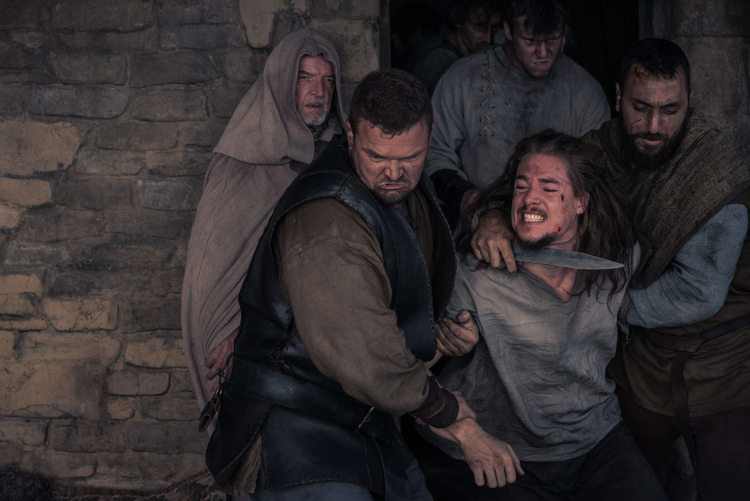 Season two, which just concluded last week (May 4th), had a series of interesting story arcs, covering the third and fourth books in the Saxon Stories. Uhtred, who usually displays the swagger and boldness of a warrior, is captured and sold into slavery, and we wondered, has he become more philosophical after being enslaved on a galley for two years? Alexander laughs, saying:

“Well, as philosophical as Uhtred can be. I think an experience like that shapes you and transforms you, it has to. I think having gone through that hardship he certainly has a different outlook on life, but I wouldn’t go as far as calling him a philosopher, I think Alfred gets closer to that.”

It’s a show that stays firmly rooted in the earth. No dragons or fiery priestesses. No outlandish magical powers or fantasy, but it does delve into prophecy, credulity and superstition. The prophecy of the dead man, for instance, in which the Danes tried to convince Uhtred to betray Alfred, was reminiscent of MacBeth and his witches.

“It was always a difficult one to suss out, how to portray it, because it could easily go over into the comical and grotesque, to tell you the truth I haven’t seen any of the second season yet…I don’t know what it’s going to look like. I hear it worked quite well.”

We assure Alexander it did! Uhtred didn’t exactly fall for it, though, he’s a bit too canny, isn’t he?

“No, that’s the interesting thing about Uhtred, what makes the story more relateable to contemporary audiences, is that he has quite a modern outlook on life, and I think the fact that he is one step ahead helps. I also think it wouldn’t be plausible that he falls for it because one or two episodes before that he plays the same trick on Sven.”

Season two of The Last Kingdom – the story of Uhtred, son of Uhtred, Alfred The Great and the beginnings of England in the midst of Viking invasions, out of separate warring kingdoms – is out now on Blu Ray and DVD. You can also catch it on Netflix.

Alexander tells us filming for season three should begin in November.

We can’t wait. We may have to watch one and two again, or at least A Day In The Life Of Alexander Dreymon. 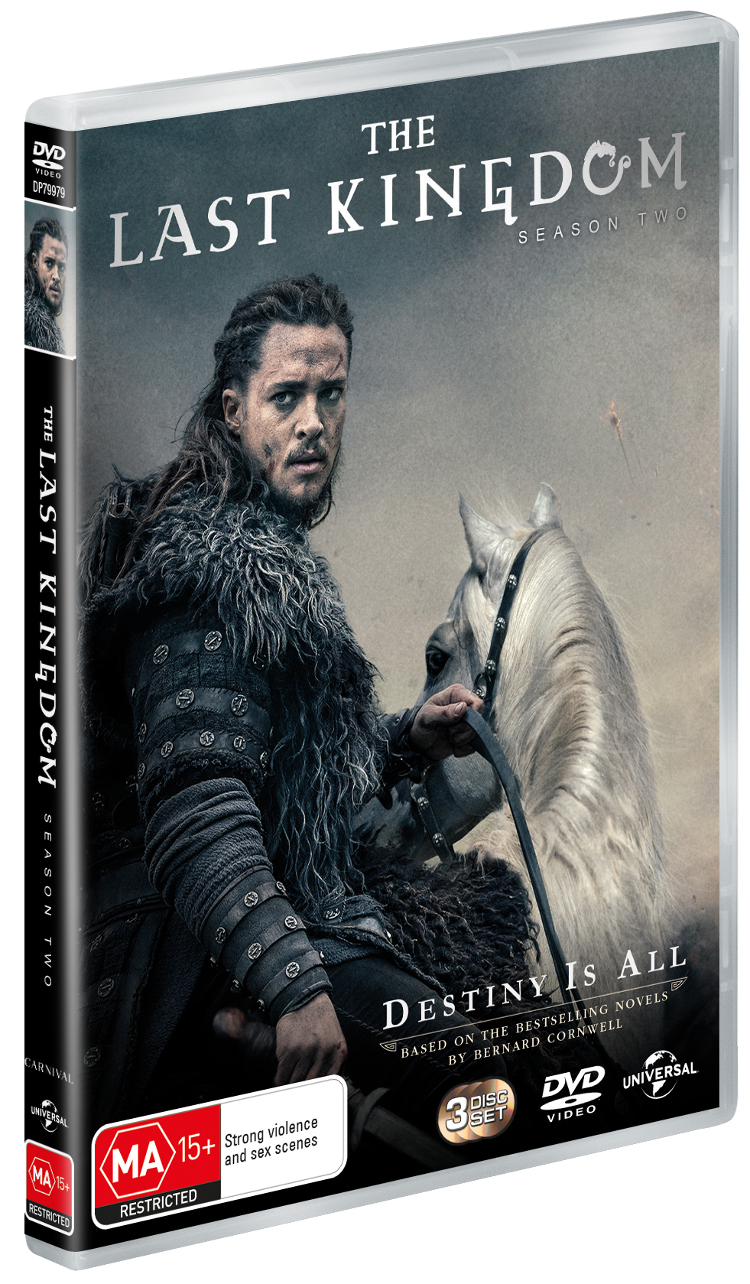