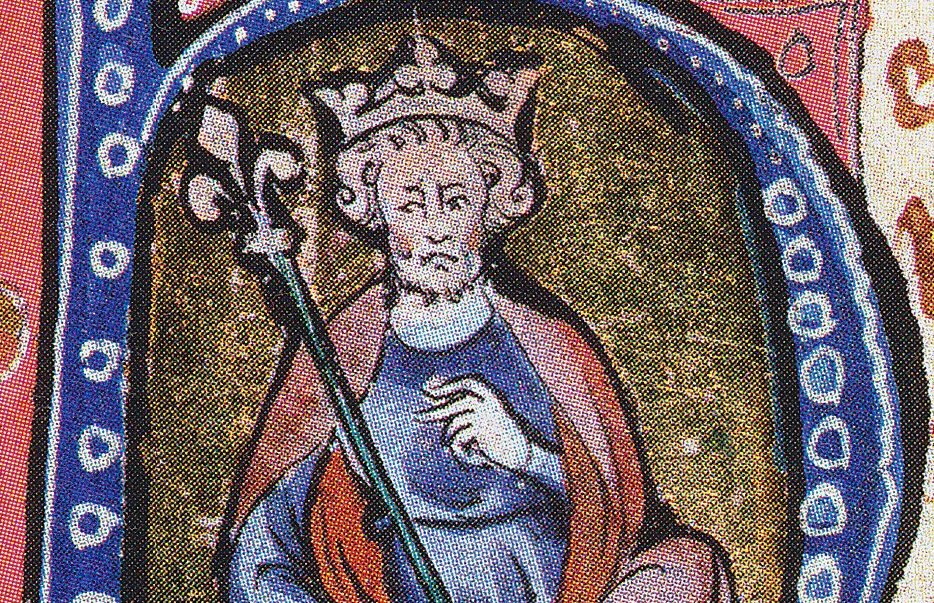 Firstly, do not read this if you are dyslexic. And no tittering in the back row. This is mostly a serious bit of history. You there, no tittering at the word tittering. It means to giggle, foolishly. No, you can’t have any pudding. King Cnut (990-1035) is most famous for parking his throne by the shore in the face of an incoming tide and commanding the waves not to wet his feet or robes. This somewhat perplexing behaviour was intended to impress the local Anglo-Saxons, to demonstrate that despite being a murderous invading Dane, he was in fact pious and humble, strangely enough the story is often used as an example of the opposite, the arrogance of kings, or indeed the folly of anyone who thinks they can defy the inevitable.

As Henry of Huntingdon told the story in his 12th century Historia Anglorum, despite the king’s command, the tide continued to rise, the waves dashed over his feet and legs without respect to his royal person. Then the king leapt backwards, saying: Let all men know how empty and worthless is the power of kings, for there is none worthy of the name, but He whom heaven, earth, and sea obey by eternal laws.

Cnut then hung his crown on a crucifix, and never wore it again, to the honour of God the almighty King. Huntingdon, like many cleric-historians, tended to embellish his tales of the heroic deeds of kings with anecdotes that illustrated the piety and magnificence of his heroes. Then as now, tales of the great and bold are one part history, one part didaction and one part entertainment. That none of the other contemporary historical or religious records describe the singular event, while mentioning other of Cnut’s devotional declarations, and that at least four different places claim to be the location of the attempt at an aquatic miracle, attests to its apocryphal nature.

This was of course a period in which almost nothing of significance happened, so it is really not surprising that clerics made stuff up. After praying, counting the chickens, hand drawing books, doing the monastic accounts, a little light buggery, dying of plague and estimating the airspeed velocity of an unladen swallow*, absolutely almost nothing else happened. Thus, before we proceed, a brief historical background to the Anglo-Saxon period is perhaps required.

After the Romans got sick of the grizzled warrior women and blue painted cannibals, the appalling weather and the even more appalling wine of Britannia, they scurried off from the Northern colonies to take up wearing even gaudier dresses in the burgeoning Catholicism of Rome, leaving the kit and kaboodle (that’s a technical term) in the charge of local Romanized Britons. These Romano-Brits got a little sick of the indigenous Picts and Celts raiding and trying to take their lands back, so they hired Germanic speaking Anglo-Saxon mercenaries known as the foedarati to do their fighting for them. The mercenary Anglo-Saxons decided to keep the lands for themselves (probably because the women and cannibals back in the Germanic lands were even more terrible than the British ones), so the Romano-Brits wrote to Aetius, the commander of the Roman Western Empire, in a document that became known as The Groans Of The Britons. He was quite comfy over there in Europe, and told them to look to their own defence. The Britons have been groaning ever since.

Nothing much happened thereafter. There was possibly some kerfuffle (that’s a technical term) over a sword, a stone, a king, a wench and an old mug, but little else occurred until the Danes began a-viking several hundred years later. Viking is another technical term, which means going on holidays by sea, but not paying any of your bills. It’s just a few years after this that the story of Cnut begins.

What was probably most significant about this era, other than the consolidation of small kingdoms into larger ones by the boorish and murderous, was that it was a period of extremely silly names. Gorm the Old was the King of Denmark from about 958 into the 980s, and ruled Norway from around 970. Harald Bluetooth Gormsson succeeded after the death of Gorm. Bluetooth further unified Scandinavia, apparently Christianizing all of the murderous Danes by being baptized by a priest name Poppo. A story that is hotly disputed, as mentioned previously, the clerics of the era did like to make things up, and if you have watched Fargo, are a fan of Nordic Noir, or heard any Scandinavian heavy metal recently, you can probably work out for yourself that they are still quite murderous. Also, Poppo. How could you get through any serious ceremony with a guy named Poppo? On a positive note, their dentistry seems to have radically improved. In the 80s Bluetooth was most probably deposed by his son Sweyn Forkbeard (pronounced Swine). As we all know, the 80s were the era that good taste forgot. Forkbeard’s house became known as the House of Denmark, rather than the House of Gorm. Later, after much viking, he became the first Danish King of England as well, therefore leaving most of Denmark, Norway and England utterly gormless.

All of these countries were quite used to Scandinavians with silly names causing havoc. 150 years previously Ragnar Shaggy Pants had invaded Anglo-Saxon England as well. After his demise in a pit of snakes his sons Ivar The Boneless, Halfdan Ragnarsson, Sigurd Snake-In-The-Eye, Bjorn Ironside and Ubba swore revenge, invaded England, and after much tittering, eventually settled there.

Sweyn Forkbeard proved the greatest viking of all (he didn’t pay any of his bills and demanded extra gold as well), forced the Saxon Aethelred The Unready, (unready meaning ill-advised rather than ill-prepared) into exile, became King Sweyn Forkbeard, and set about consolidating his kingdom, but died only five weeks later in February 1014. After Forkbeard’s death Aethelred returned triumphant from exile. You may think as he returned as King his advice wasn’t that bad. However all of the fleets of murderous Danes in England swore allegiance to Forkbeard’s son, Cnut. Both Aethelred and his son Edmund Ironside, who were also at war against each other, lasted about another 3 years as Cnut captured more and more territory. After Aethelred died, Edmund made a treaty with Cnut, ceding him most of the north, and agreeing that Cnut iwould inherit the south, which happened only a few weeks later, when Edmund succumbed to his battle wounds.

Cnut The Great, also known as King Canute was crowned in Old St Paul’s Cathedral in London on the 6th of January, 1017. He ruled as King of England, Denmark, Norway, parts of Sweden and Hamburg-Bremen for 19 years. His control of the Scandinavian kingdoms saw an end to viking raids, and the return of prosperity.

Cnut ruled by buying peace with Danegeld, rewarding Danes to cease their viking, and by paying heregeld (Army Gold), to keep a standing force of Danes at the ready, with taxes collected from the local earldoms. After Cnut’s death in 1035, his son Harthacnut ruled in Denmark, and Harald Harefoot succeeded in England. Both died within ten years of Cnut, otherwise a unified Anglo-Scandinavian dynasty could have emerged. Instead England fell to the Norman invasions in 1066. The age of the viking was, as they say, history.

In the confusion over whether the legend of King Canute defying the sea was an act of pride and folly or an act of humility and wisdom, another possibility presents itself; perhaps Cnut had his throne taken to the shore in a symbolic act of defiance to suggest not his piety, but his strength. Perhaps he was demonstrating that, although he was a Dane who had come across the sea himself, he was the only one that stood between a united, prosperous England, and a return to the days of viking raids, of fire, pillage, war and invasion.

With Cnut the Great, both the age of viking, and the age of silly names, was over.

*See Monty Python And The Holy Grail for the airspeed velocity of an unladen swallow.