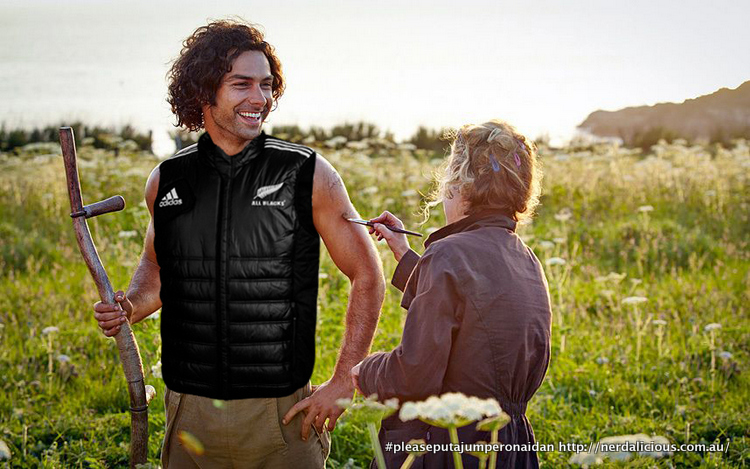 Olga Hughes
Film & TV
January 23, 2016
We have had enough. Poor old Aidan Turner has just been officially nationally objectified by winning an “Impact Award” at the British National Television Awards this week, all for appearing shirtless whilst doing mundane farming chores in the third episode of historical drama Poldark.

Although Poldark received a nomination for best New Drama and Aidan Turner for Drama Performance, the public voted for Aidan to take home the “Impact Award” for his physique, and not the considerable acting chops he displayed as Ross Poldark from the beloved series of books by Winston Graham.

Radio Times claimed in this article that Aidan was “beaming with joy about his win” when he told them “I didn’t even know what this was, I was sitting there and my face just came up on screen”. Rather, in this video, he pulls a face and asks them “it’s a good thing right?” After all, in Poldark Aidan Turner has given the acting performance of his career, to be acknowledged and awarded for one brief scene that focuses on his body, however well formed, rather than that performance, is actually kind of insulting.

It’s only a “good thing” if it really is a good thing that people simply can’t move on from seeing an attractive man without his shirt on, which is hardly as staggering as the betrayal of Jon Snow (another contender for the award). The said shirtless picture, which the strictly non-objectifying nerds refuse to publish, has been endlessly flogged since Poldark producers released it early last year for some pre-show publicity. Clearly the BBC were impressed with the reaction it caused, also forcing Aidan appear half-naked in his next BBC show And Then There Were None.

Aidan told Radio Times he does not feel objectified. Of course, it’s not surprising Aidan would not want to upset anyone. Yet it hardly matters that he is being good-natured when it is plain to see that his looks are being fully exploited, and exploitation is unacceptable for either sex. If Eleanor Tomlinson had been splashed about the internet half-naked for months and months on end there would be a fully-justified uproar.

There are one, two, three, four, five, six, seven, eight, nine, ten, eleven, twelve, thirteen, fourteen, fifteen, sixteen instances of popular magazine Radio Times displaying the image in some way, which is all I could stand to find before wanting to stick forks in my eyes. I am sure there are more. But that is more than one a month, and in a little under half of the articles on Aidan Turner or Poldark I could find on said website. This includes an entire article dedicated to Twitter reactions to Aidan Turner in a towel. It does not include the endless remarks made by Radio Times staff about Aidan’s looks, or the claim that the character Ross Poldark is “a man with a penchant for taking his top off” when the character removed his shirt to work in the fields once, and once more to go for a swim. Bedtime undressing/dressing doesn’t count. Which hardly indicates a penchant when in only one of these instances it was not absolutely strictly necessary.

It’s not only Radio Times of course. Digital Spy published a doozy the other day where Aidan allegedly “promised” more “slightly naked scenes” in Poldark series 2 when all he was doing was responding to whether he had relaxed his diet over Christmas, answering “I think I’ve finished all the slightly naked scenes I’m going to be doing – I think they might all be done by this stage!” The article did not choose to focus on his other commentary on keeping the Poldark standard high, but instead, on supposed nudity.

Of course the number of times that Radio Times has used the image is less relevant than the length of time they have been using it for. Had they used it a couple of dozen times in the weeks after it was released, when there was still a buzz around it, it could hardly be deemed strange. The fact that they have now been frequently using the same image, and making the same sort of objectifying remarks, for almost a year is the behaviour of weird, creepy perverts.

Thankfully the fan-favourite Poldark pictures tend to be images of both Ross and Demelza looking wind-swept and romantic on cliff-tops. In fact one of the more popular images of Eleanor Tomlinson is this lovely image of her lying dreamily in a field with her best friend Garrick. 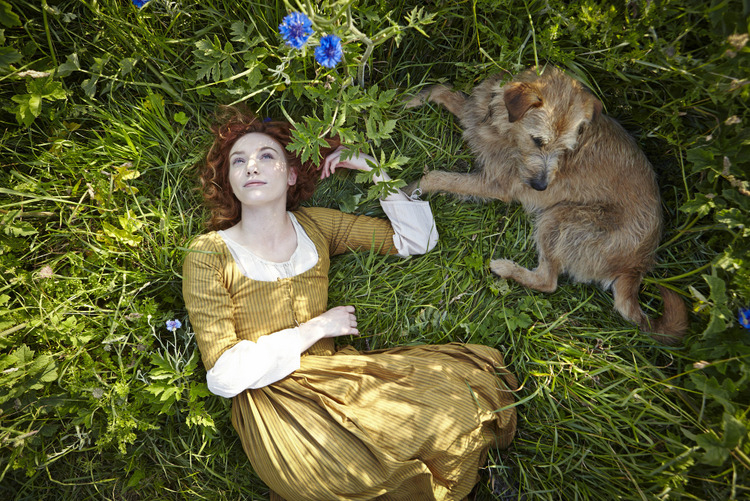 Because we, like most fans, like to celebrate the beauty and splendour of the story, and not treat talented artists like pieces of meat, we invite you to help us put a jumper on Aidan. We have prepared a series of vests for Aidan. Pick your favourite, or create your own and share with the hashtag #pleaseputajumperonaidan, (or post them on our Facebook page). I’m rather fond of the fluffy vest myself. 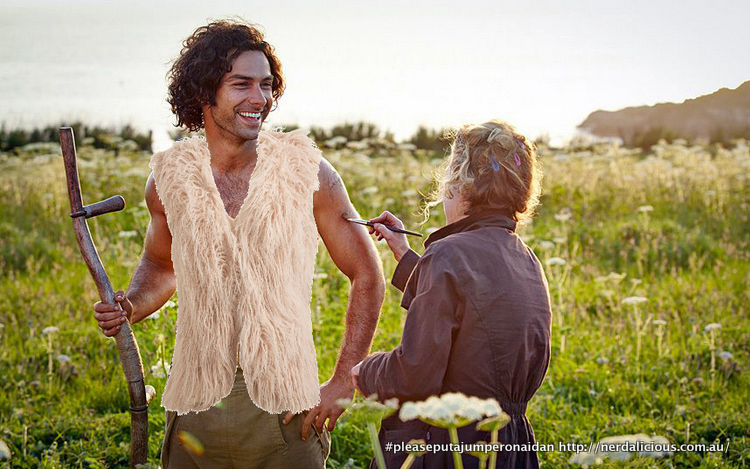 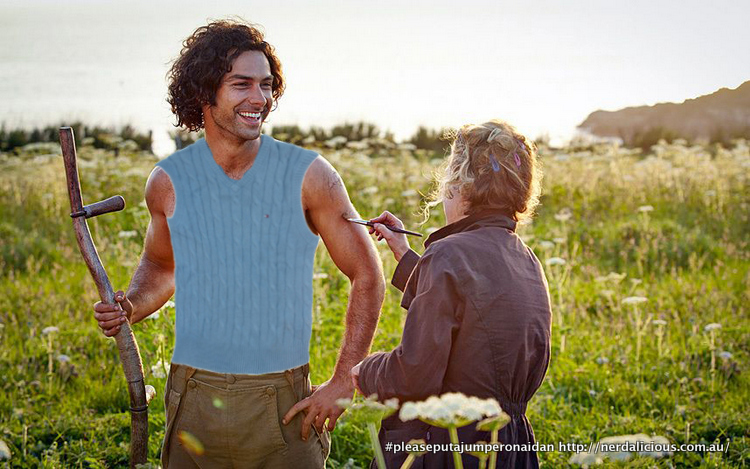 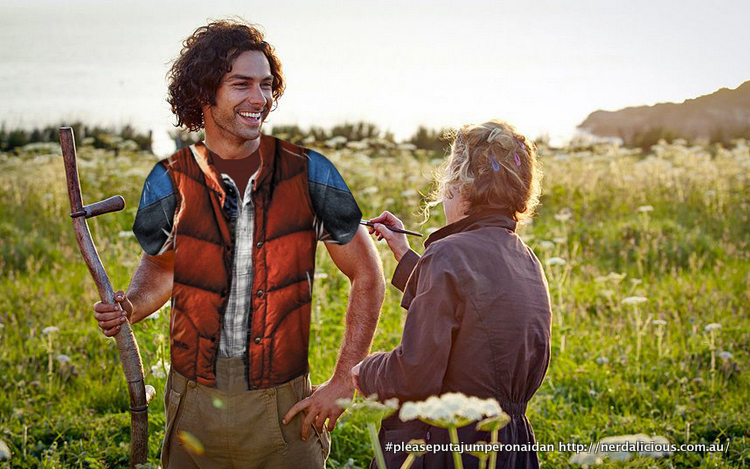 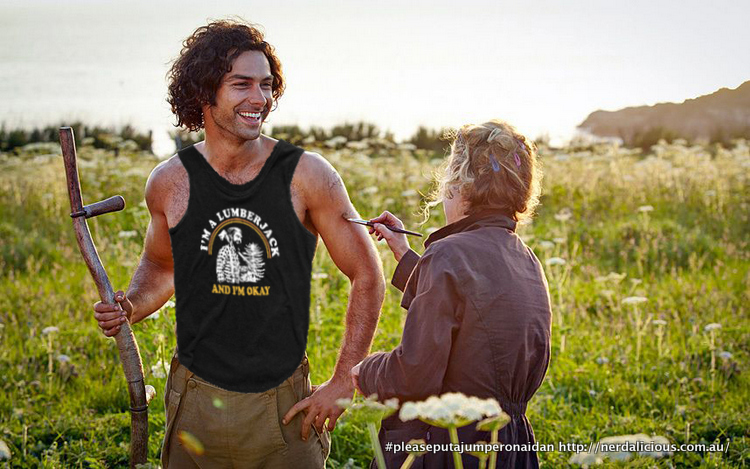