All of Mrs. Coulter’s story over season two, from her torturing the witch Katja, the murder of Cardinal Sturrock and the subsequent blackmail of McPhail, to the revelation of her suffering family violence, to her suffering and oppression under the patriarchal Magisterium, is leading to the final episode, the end of The Subtle Knife. But one of the most interesting revelations in the penultimate episode, for both viewers and book fans, was exactly how Mrs. Coulter managed to manipulate beings made up only of matter and malice. 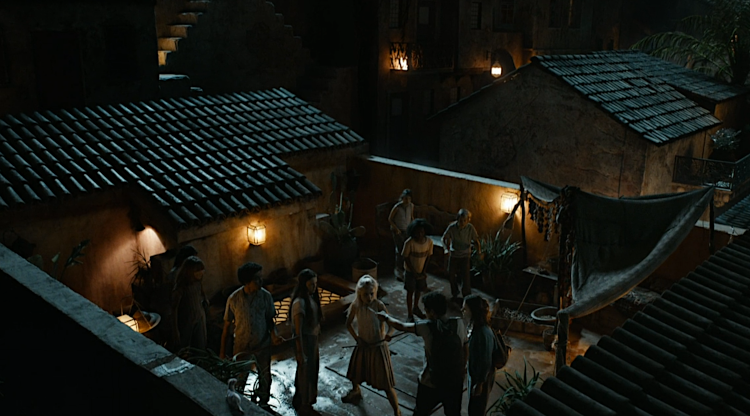 While the witches watch angels stream across the sky, Ruta Skadi vows to follow them to find Asriel. In the Cittàgazze, Will, feverish from his wound, is having visions of his father. Lyra is confronted by the dead city’s children, with Angelina’s ghoulish face peering through the crack in the door as Lyra flees to Will in a panic. “Angelica’s downstairs and she’s going to kill us”, she cries to Will, and they attempt to escape the house through the roof, only to be followed by the gang of children. Angelica makes a revealing remark, telling Lyra and Will the knife “would have protected us and our adults in the hills”. Unfortunately the scene is cut short with the arrival of Serafina, and it didn’t capture the real tension of the original text.

Lyra’s fascination with the witches matches Will’s mistrust of them. Serafina wants them to return to her and Lyra’s own world, where the flora is more powerful, and where she feels she can best keep Lyra safe. Will is typically taciturn. But when Will asks Lyra why she left her own world, her answer is childish and naive. “To investigate Dust. To try to do my best by Roger. The thing is, these witches… ..they’re connected to the Earth, they can find answer after answer.” Lyra is only a child who understands little more than her father murdered her best friend in the quest to understand Dust, and she only knows what Asriel has told her about it. Her heartfelt pledge to do her best by Roger only illustrates how young she is.

Mary, meanwhile, under the protection of angels, is exploring the Cittàgazze, while Angelica and Paola furtively spy on her. Of all of the additional scenes created for the series, Mary’s meeting the two young sisters is one of the most interesting. It shows the continued empathy the writers treat child characters with. We had a brief shared moment between Angelica and Will in Theft. But from Lyra and Will’s perspective, although they feel bad about Tulio, the children are mostly savage and capable of killing them. From Mary’s perspective, they are waifs in need of nurture. Paola asking for a hug and Angelica asking Mary to stay and look after them to tell them when to have baths obviously takes the edge off their bravado. Mary, in this scene, is somewhat defying what the angels told her, to play the serpent. While this all ties in to the ever-present prophecy, this moment with the children foreshadows Mary’s true nature. Mary is not a serpent, like Serafina, she is a mother-of-all, and the absolute opposite of Marisa Coulter.

As Mrs. Coulter prepares to face down the Spectres in the Cittàgazze, Boreal slips quietly back into a building and locks the doors, demonstrating the deep divide between them that he himself doesn’t recognise. It put me in mind of Boreal and Mrs. Coulter sitting as far apart as possible on the couch, and his distaste when she informed him she had sent spy flies after Lyra. The scene where Mrs. Coulter defies the soul-sucking Spectres is majestic, not only for her fearlessness, but for her fascination with them. Her Monkey is not fearless, however. He shows the same trepidation he did when she was drunkenly navigating the balcony. In most relationships the dæmon is the guiding voice, or at least equal with their human counterpart. Mrs. Coulter is clearly the dominant one. 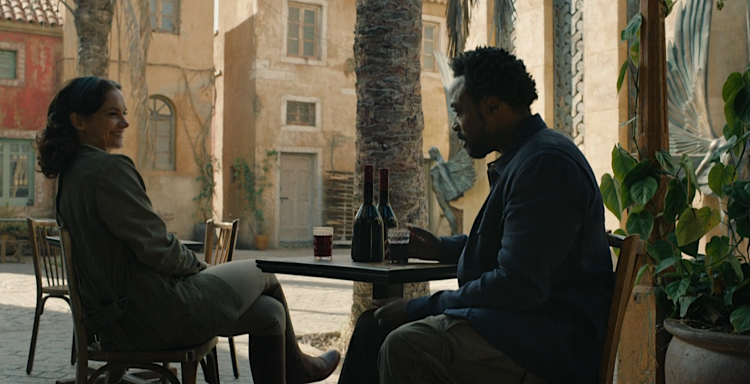 Once Boreal discovers, however, that Mrs. Coulter has mastered the Spectres, he is newly enthused, boyishly happy, full of plans with what they can accomplish together with this newly found power. It is interesting they chose to write the scene this way, after much of the treatment of Mrs. Coulter has been empathetic this season. In this scene Mrs. Coulter watches Boreal closely as he begins to spasm from the poison. As she shushes him when he starts to struggle, the shock at her betrayal is plain on his face, and a single tear rolls down his face as he takes his last breath. Her “Goodbye old friend” sounds slightly regretful, and she sits with his corpse and continues to drink as night has fallen. She drunkenly holds her hand over a burning candle, mirroring Father MacPhail’s self-flagellation, but she hisses “Strength is Salvation” at her cringing dæmon, leaving us to wonder that, even though we see glimpses of humanity, is Marisa Coulter truly capable of remorse?

Book to Screen: Book spoilers for The Subtle Knife ahead!

I find myself, unsurprisingly, preoccupied with Boreal and Marisa this week. Lyra and Will’s story was a little muted, and, well, Lee and Jopari are heading where none of us want them to go. The absence of Lena Feldt in Boreal’s murder scene also meant the discovery of the prophecy was moved to the Magisterium, and in two powerful scenes we saw the Magisterium launch their plot to assassinate Lyra.   In Boreal and Mrs. Coulter’s scenes, the first and most interesting addition to the text was Mrs. Coulter’s first encounter with the Spectres. In the books she informs Boreal that she has been able to bargain with the Spectres by offering them all the victims they desire. But how she initially communicated with the Spectres was never explained. In the scene she moves far away from her dæmon, and later tells Boreal that she ‘suppressed herself’, concealing what makes her human. Boreal, of course, only sees this is terms of what they can gain from it. Perhaps he should have been more concerned at the uncanny ability.

As I have mentioned in previous weeks, there have been a lot of subtle alterations to Boreal’s character on screen, and while I wouldn’t call him more likeable, the viewer is far more involved with him. That he and Mrs. Coulter are closer in age changes the nature of their relationship, he is not 30 years older, therefore it’s possible there was a mutual attraction. This Boreal’s feelings for Mrs. Coulter are more genuine than Carlos in his sixties. Older Carlos merely wanted to possess her like another shiny trinket. That this Carlos wants to share his life in a world where she will be afforded more freedom is also interesting. In chapter fifteen, Mrs. Coulter poisons Boreal and immediately turns to attack Lena Feldt while he is dying, showing her utter disregard for him. In this scene she stays and watches him die, sounds almost regretful, and then stays by his corpse drinking. Is she showing the same disregard here, or being sentimental in some twisted way?

Despite a small misstep in season one, in a piece of dialogue where Ma Costa urged Lyra to keep the spy fly as a token of her mother, the balance between Mrs. Coulter’s utter ruthlessness and her genuine love for Lyra still hits the mark every single episode. Through Lee Scoresby we learned that Mrs. Coulter was an abused child. The contrast between the two, however, is that Lee’s experiences turned him into a nurturing character, and Marisa’s turned her into an abuser. In The Scholar we saw the contrast between Mary and Mrs. Coulter, that Mary is able to pursue her life with a measure of freedom, while Mrs. Coulter was stifled in every way by the Magisterium. But then we know Mrs. Coulter is happy to experiment on children even if it results in their deaths, while Mary’s heart opens up to any child in need she comes across, even when she has gone through the most shocking experience of her life and crossed into another world. Even Asriel has been a better parent than Marisa. Even Father MacPhail shows more remorse for his actions than Mrs. Coulter does. So even if we have been given a deeply interesting insight into Marisa Coulter and what helped make her, we can never forget for a moment that she is a cess-pit of moral filth.