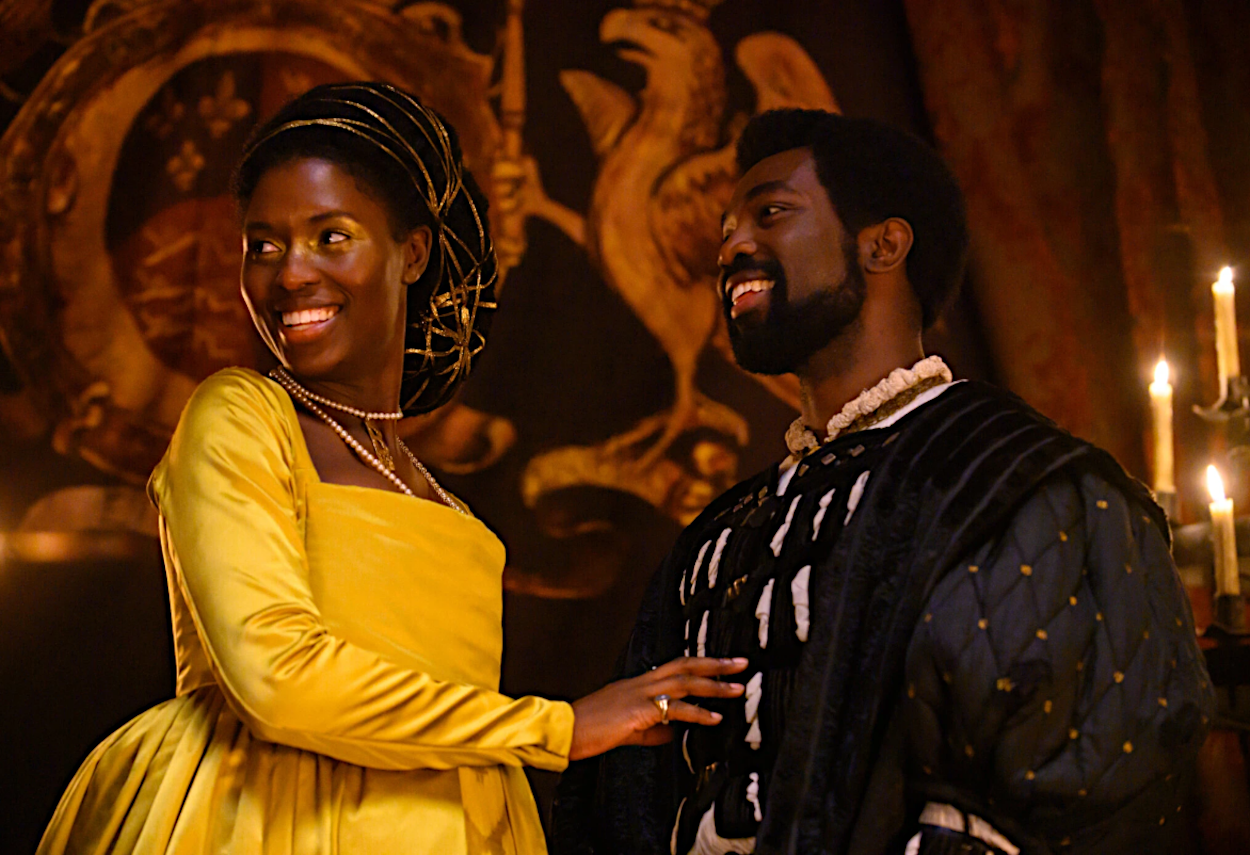 Channel 5’s Anne Boleyn – ‘Grumble all you like, this is how it’s going to be’

There are certain aspects of Anne Boleyn’s life, and death, that will always influence the way her story is told. One of the most important factors in this is the utter futility of Anne’s death. We know that Henry VIII’s desperation over the succession, leaving a trail of dead spouses in his wake, merely resulted in his longed-for son Edward’s brief reign and early death. Even Katherine of Aragon’s battle for her daughter’s rights in the succession came to little, Mary had an even briefer and unsuccessful tenure. Anne Boleyn was murdered by Henry VIII for failing to provide an heir, yet her unwanted daughter Elizabeth went on to reign for 45 years, ‘The Golden Age’ outlasting her father’s reign by almost a decade. In hindsight, we know that Anne Boleyn’s death did not bar her daughter from the succession as Henry had planned. It merely delayed her.

The other facet of Anne’s life that holds an enduring fascination is Henry VIII’s absolute devotion to her prior to 1536. For seven years Henry raged and fumed but remained chaste and fulfilled his promise to marry Anne and make her his queen. How does one go from such deep love to the darkest hatred in the space of mere months? Unfortunately, rather than placing the bulk of the blame on Henry, where it belongs, and recognising this act of domestic violence for what it is, writers and readers still seek others to blame. Historical figures such as Thomas Cromwell, or George Boleyn’s wife Jane, the Lady Rochford, remain the most popular scapegoats. Henry curiously continues to escape bearing the full weight of his wife’s murder, despite the fact that he repeated that act only six years later. The presence of those notorious love letters holds the clue. If you haven’t heard the term ‘pretty duckies’ uttered over and over and over by historians then you’ve probably never read anything about Anne Boleyn. Henry’s reference to his beloved’s breasts still holds a bizarre charm for readers. It is likely that the fascination stems from the fact that it is a document in Henry’s own hand, it makes it tangible proof of his love and his physical desire for Anne.

By having this ‘proof’ of Henry’s devotion to Anne, and by feeling the futility of her death, we then arrive at the reason that writers and readers continue to look for someone to blame for Anne’s fall. Historian Hayden White wrote that we seek closure in history so we can make a moral judgement. Ascribing the blame to Thomas Cromwell or Lady Rochford provides those who can’t understand Henry’s actions with closure. It makes sense that Henry, who had been so in love, had been ‘tricked’. But this is merely an example of how feminism has failed to truly reach historical writing. Even a rudimentary understanding of the psychology of male violence against women would reveal patterns in Henry’s behaviour that scream of domestic violence. We have the benefit of hindsight, after all. We can see all of Henry’s appalling career of emotional and physical abuse against his wives. 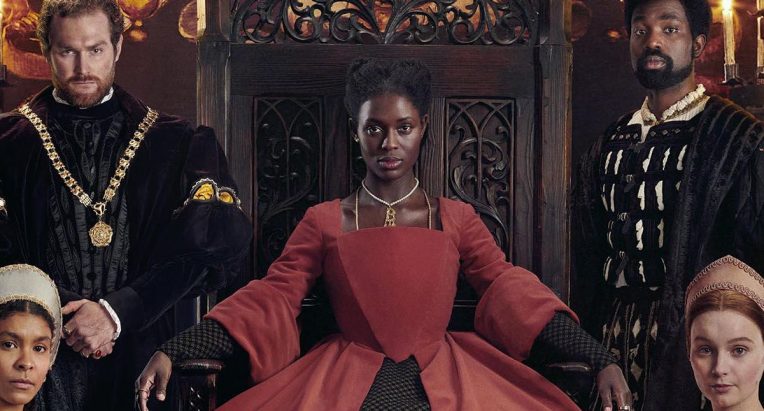 I was very hopeful for a fresh look at Anne when the new Channel 5 miniseries was announced, particularly with the casting of Jodie Turner-Smith as Anne and Paapa Essiedu as her brother George. Mostly I was hopeful that a feminist reading of Anne would present us with something more complex than the usual fare, particularly as it was framed as a psychological thriller that explored the final days of her life. I was excited to see colour-conscious casting, which the cast have been referring to as ‘identity-conscious’, an apt term for bringing individual experience to a performance. But unfortunately the series proved somewhat of a disappointment, with mainly mixed reviews from audiences and critics. While the praise for Jodie Turner-Smith’s performance has been enthusiastic, the writing itself has not been well-received.

Writer Eve Hedderwick Turner went out of her way to establish Anne’s sexual dominance over Henry. This was interesting, and not objectionable, because, while I loathe the tedious ‘seductress Anne’ portrayals, the sexual attraction between Anne and Henry after seven years of abstinence prior to marriage would have been a significant factor in their relationship. Essentially, after they were married, there would have been a focus on the physical part of their relationship, not in the least for the act of procreation. However, whether Hedderwick Turner had this in mind when she was writing is questionable. Many don’t believe that Anne and Henry remained abstinent, and most use Anne’s virginity, if they believe it at all, as an excuse to paint her controlling Henry by refusing to sleep with him. The kiss that Anne laid on Jane Seymour which seems to have outraged so many was hardly sexual, indeed it was merely a cheeky power move by Anne, who drew back and murmured ‘I can see the appeal’, one of few amusing moments in an otherwise dark atmosphere.

Anne Boleyn’s ‘quietness’ gave it an ethereal air, coupled with Jodie’s majestically understated performance, it was certainly a very new and intimate response to Anne. Removing great crowds of ladies maids from Anne’s presence and setting it in a smaller building emphasised Anne’s loneliness and isolation, but these subtle aspects are let down by mawkish symbolism. Most unfortunately, this particular gem of a performance was badly let down by the lazy portrayal of Jane Boleyn and the strangely ineffectual Henry VIII, whose main impact lay in being absent.

With Henry absent, as he was, allowing Cromwell to take control, most of the blame is placed with Henry’s then-favourite henchman. And historically, Cromwell didn’t stick his neck out for Anne, but then, why should he? Cromwell wasn’t the one responsible for making queens disposable, Henry had already done that with his first devoted wife. Still the bulk of the blame really falls to Cromwell in this offering. There is even a slight hint of blame towards Anne when blenches at her error in provoking Norris about wanting Henry to die so he could fill ‘dead men’s shoes’. The old and completely false stories of Anne being testified in court against by her ladies is then trotted out. The inadequate, milk-and-watery Lady Worcester stammers and trembles through her testimony, but most objectionable was Lady Rochford striding in to testify that her husband and his sister had committed incest. The worst aspect of this, and why I have called it lazy, is that Lady Rochford appears in the entire three episodes for a few minutes at most, mainly to smirk, to make a few barbed remarks, but then suddenly and without motivation commits this terrible act against her family. There is no feminism for anyone but Anne Boleyn here. When Anne enters her cell the Tower after her arrest she utters a sentence once purportedly used as her motto ‘ainsi sera, groigne qui groigne’, ‘grumble all you like, this is how it’s going to be’. It almost felt like an omen, that he we were again, mired in the muck of centuries-old misogyny, blaming the women around Anne for her fall. 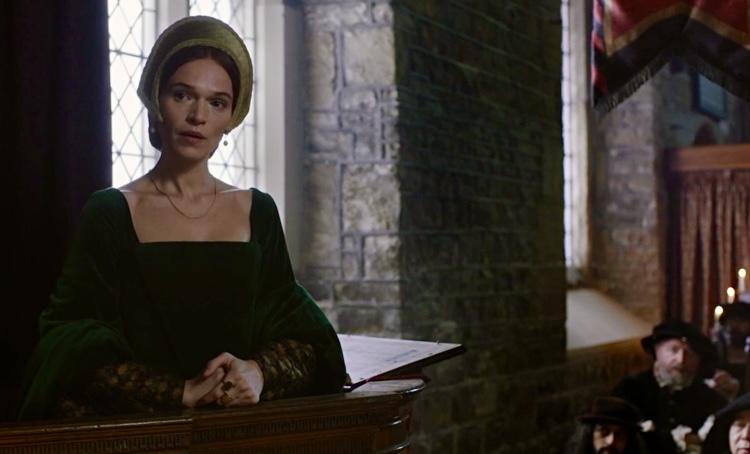 Jane Boleyn did not testify at the trial, there were no witnesses called, and we have no evidence that she was even questioned about Anne and George. You can read a blow-by-blow response to Jane Boleyn’s imaginary crimes here. But in the meantime, here we are grinding our teeth again, let down by women writers writing about historical women and presenting the same old stereotypes. Feminism isn’t just for the popular girls. In fact the recent discovery by historian Kate McCaffrey, that Anne Boleyn’s prayer book was given to one of her ladies, Elizabeth Hill, proves that we underestimate female relationships in Henry’s court. In her announcement, McCaffrey writes that the book was “passed between a network of trusted connections, from daughter to mother, from sister to niece. If the book had fallen into other hands, questions almost certainly would have been raised over the remaining presence of Anne’s signature. Instead, the book was passed carefully between a group of primarily women who were both entrusted to guard Anne’s note and encouraged to add their own.” Usually stories like this are dismissed as romantic traditions. Only now we have an actual example of Tudor women, secretly and at great risk to themselves, preserving this tiny piece of Anne for her daughter, Elizabeth.

This discovery has given us more than a new insight into female bonds at the Tudor court. It has given us the right to expect more, and better. The #metoo movement hasn’t reached historical writing about figures like Anne Boleyn. It’s time to realise that we are well beyond the point of being proud of ourselves for realising that Anne Boleyn was not a witch with six fingers. It’s time to think about how all the women of Henry’s Tudor court survived against great odds and under enormous pressure. It’s time to think about the relationships between those women, like Anne’s sisters, both Mary and Jane, and realise they’re not merely props in Anne’s story to be wheeled out and exploited when necessary. It’s time to recognise the experiences we share with all of these women, and that those women are human, with their own stories that need to be told.