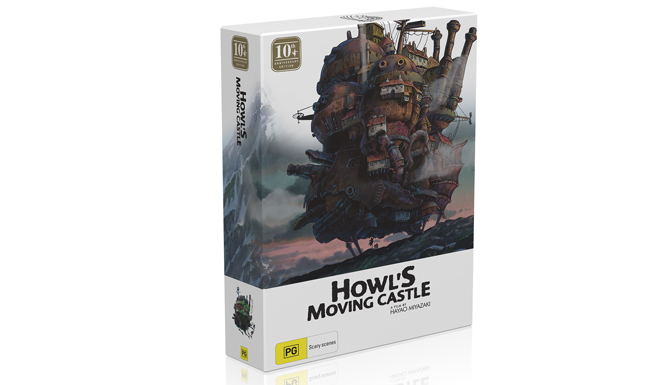 Howl’s Moving Castle tells the story of Sophie, a young hatmaker suddenly swept up into a mysterious and dangerous adventure. Sophie is a responsible, sensible young woman. Perhaps too sensible. She encounters the powerful wizard Howl while travelling to visit her sister. Later, The Witch of The Waste sweeps down on the shop and out of jealousy curses Sophie, turning her into a grey-haired ancient old woman. Sophie is horrified and distraught at first, she sets out to find the infamous Howl and have the curse reversed. That’s just the beginning of an adventure filled with odd magical characters and astounding enchanted landscapes, warring nations and warring wizards, and the remarkable Howl’s Moving Castle itself.

Based on the novel by Diana Wynne Jones, it is a tale of passion, mystery, magic and love, which explores the freedom that can come with age, liberation from the anxieties and responsibilities of youth, and in seeking one’s own path, of defying the destiny, the limitations and expectations imposed by society and other people.

Hayao Miyazaki, director and founding creator of Studio Ghibli, came out of retirement to take the reigns of the project after the original director abruptly left. We’re glad he did. Howl’s Moving Castle is a gorgeous tale, a visual triumph, an artistic masterpiece. It combined state of the art digital techniques with traditional hand drawn cel animation to create a fantasy spectacular that is still unsurpassed. To celebrate the genius of Miyazaki and the vision and artistry of Studio Ghibli, Australia and NZ distributors Madman Entertainment have released a fantastic 10th Anniversary Boxed Set of Howl’s Moving Castle.

The set includes Blu-Ray and DVD of Howl’s Moving Castle, The Art Of Howl’s Moving Castle, a 256p glossy hardcover book published by Viz Media that presents an close-up look at the creation of the film. Through interviews with the artists and production staff, key points and ideas from the director, the preliminary sketches and concept drawings, through to finished art, the characters, the backgrounds, the cels and the creation of the Moving Castle itself, the animation of which required over 80 separate moving, transforming elements. The last section showcases the English language script.

The 10th Anniversary Box Set also includes an exquisite figure of Heen, the ancient, magical dog, atop a crystal sphere. In addition there is a set of exclusive colour postcards featuring scenes from the film. The whole set is packaged in an impressive illustrated slip case. A fantastic way to honour the creative genius, the artistry, the magic of this landmark film.

We’ve included a first-look unboxing video below, so you can really appreciate this set that commemorates one of the high points of the art of animation.

On the all region Blu-Ray, and region 4 DVD you can watch either the original Japanese language version with English subtitles or an English language dub featuring screen legends Jean Simmons and Lauren Bacall, other members of the amazing voice cast include Christian Bale, Emily Mortimer, Blythe Danner and Billy Crystal. Bonus features include a look at the storyboards, an interview with Diana Wynne Jones, Japanese trailers and other Studio Ghibli trailers, an interview with Pete Dexter, director of the English dub, a visit with Hayao Miyazaki to Pixar Studios, and more.

This brilliant Anniversary Edition package is only available at the following locations. There are strictly limited numbers, so don’t miss out. Get it before it disappears through Gametraders, Sanity and JB Hi-Fi in Australia, and Mighty Ape in New Zealand.