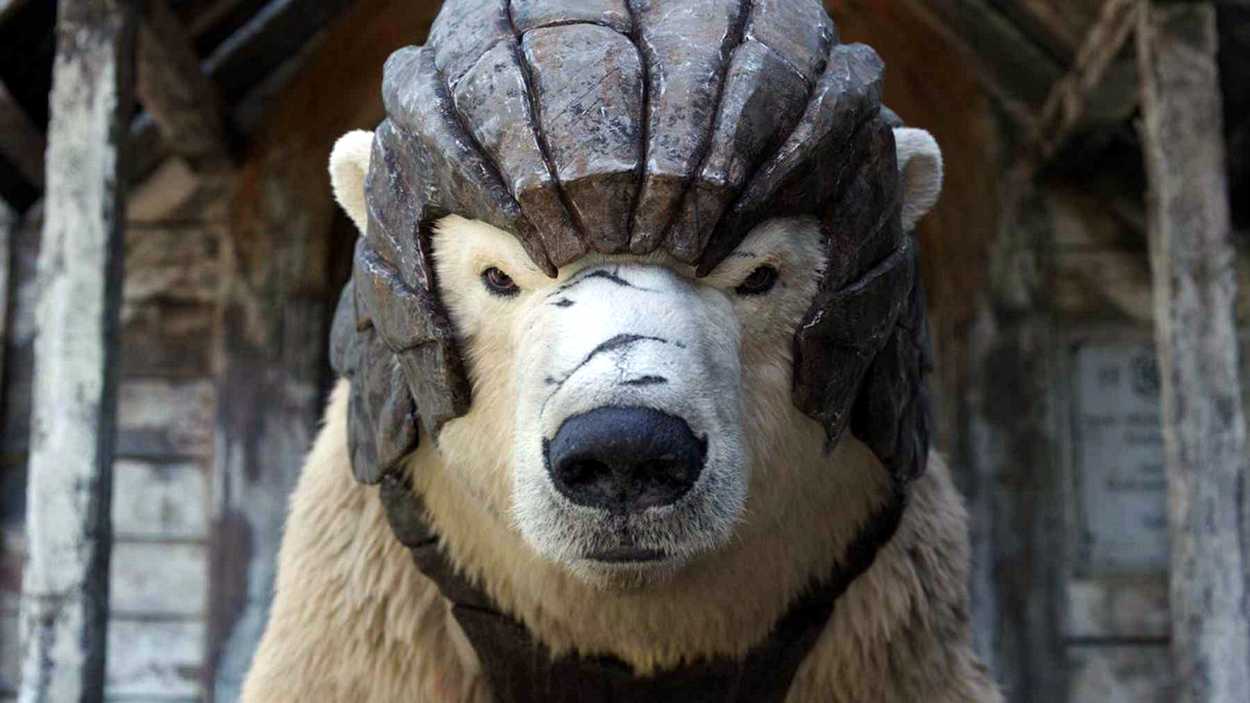 We’re now four episodes in, and Armour revealed some small flaws in the thus-far polished veneer of His Dark Materials. Lee Scoresby, however, is not one of those. Lee will always be my favourite character in HDM so I was particularly invested in this episode. Despite being one of the first castings, Lin-Manuel Miranda has been one of the more controversial ones, partly because many fans had the image of Sam Elliott fixed firmly in their head and partly because Miranda is considerably younger than Lee, who was fifty-nine in Northern Lights. I have only seen Miranda in the Mary Poppins sequel and deliberately avoided watching him in anything else before HDM so I didn’t have any real impression of him. Sam Elliot, in The Golden Compass, was in his early sixties and sporting an impressive snowy mane and matching moustache, but Philip Pullman’s actual description of Lee Scoresby in NL was typically sparse, “a tall, lean man with a thin black moustache and narrow blue eyes, and a perpetual expression of distant and sardonic amusement.” This leaves a lot of breathing space. 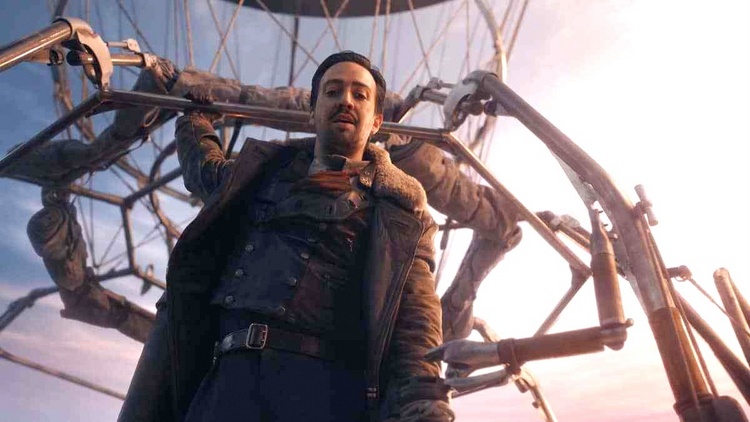 In this week’s opening scene we are introduced to a merry young version of Lee Scoresby flying his balloon and singing a Western song accompanied by his dæmon Hester. This was a nice touch, it may be the only time we see Lee and Hester completely alone and free depending on where the series takes them. We see him looking over the Gyptian ship on the sea before Lyra runs joyfully to the bow to see the port of Trollesund emerging. Much of Lee’s dialogue in this episode is lifted from Pullman’s short story Once Upon a Time in the North, the story of how he meets armoured bear Iorek Byrnison. His character and motives are established in the opening scenes, he is seeking a bear, and he owes Iorek trouble. His pick-pocketing activities, which are not present in the books, are admittedly strange. Significantly he only pick-pockets villains who are helping keep Iorek imprisoned, so I am assuming these abilities may come into play again later in the series. For my part I am perfectly happy to see comedic bar fights over guns. And it’s not all clowning. Lee keeps reminding Hester he owes Iorek their life and he is hell-bent on setting Iorek free, somehow.

Coram’s slightly disbelieving “The Madonna is it?” when Lyra is explaining what the alethiometer’s symbols mean to her was an unexpected funny moment but I was disappointed overall in Lyra and Coram’s story this week. The decision to make Lyra a little older is having the effect of an eleven year-old’s dialogue that may be precocious and cute coming across as smug and obnoxious in a thirteen year-old. Giving Farder Coram’s lines to her at the Witches’ Consulate really drove this home, but her calling Iorek a coward was just loathsome and completely out of character. At least she flinched when he intimidated her (this reaction being natural). With the direction the characters are headed hopefully we won’t be seeing too much more of this. Lyra’s destiny has a much more serious purpose than besting old men.

James Cosmo had some great scenes this week and it is so pleasing to see such a beloved character played so wonderfully. Seeing his grief at his son’s death was both surprising and touching, along with his eagerness to know where Serafina was, clearly indicating he still loves her. The exchange between Coram and her dæmon Kaisa was regal. I am really looking forward to seeing Coram and Serafina together on screen in the next episode. 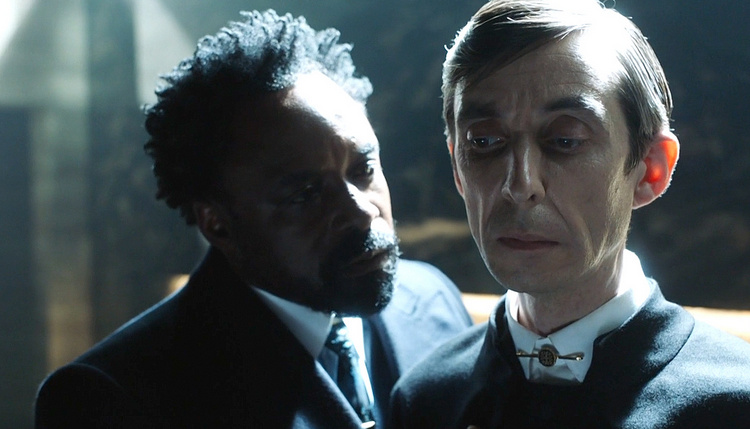 The Magisterium imagery has gone from subtle to slightly ham-fisted in the space of two weeks. All the dæmons belonging to men in the Magisterium are animals people may have an aversion to, ‘creepy crawlies’, insects and reptiles and Fra Pavel’s dæmon has been changed from a frog to a rat. Not a cute white rat but a greyish-brown rat we would associate with ‘vermin’. The exchange between Boreal and Fra Pavel, the Magisterium’s alethiometer reader, was somewhere between discomfiting and hilarious, like a Midsomer Murders episode, with televisions’ love of anti-intellectualism at play. This is the first sort of fragile connection HDM has made between the Magisterium and the Catholic Church (on which Pullman based it) and it wasn’t bravely done, with Boreal hopping about like a high school bully, calling Pavel ‘Ratty’ and threatening to reveal his ‘filthy predilections’, which really could mean anything in a religious context. Although I usually applaud subtlety, if you want to call out the Catholic Church on child abuse, go the whole hog. They are still using the food analogies, with Cardinal Sturrock’s hilarious line to Mrs. Coulter “I know how you like your sustenances.”

The Golden Monkey’s plight was touched on for just a moment this week, where Mrs. Coulter slaps his hand away when he reaches for hers. I suspect this is Ruth Wilson’s attention to detail and it is always well done. Even with far less screen time this week Mrs. Coulter left her mark.

Despite not having enough screen presence the dæmons have been wonderfully created, really capturing the characteristics and movements of their animal counterparts. Seeing Pan and Sophonax trotting alongside Lyra and Coram was a real delight, particularly as Sophonax was the same size as Pan’s Arctic fox. In Iorek’s case, polar bears are a pretty difficult animal to give distinct characteristics to, and they can also be very appealing, as amusingly referenced by Lee (‘cute little nose’), but Iorek’s broad head and scarred snout give him a unique countenance. His voice maintains some of that sonorous quality of his screen predecessor, voiced by Ian McKellan, but Joe Tandberg also gives it a harsh, guttural touch which works perfectly with Iorek’s general temperament. 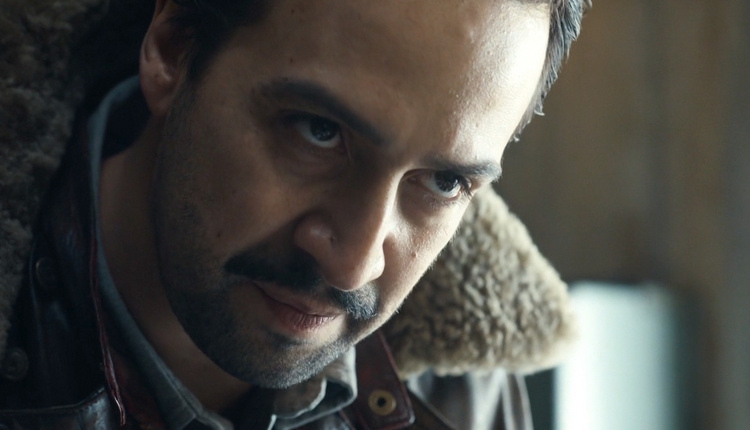 The real stand-out for me in Armour was the story of Lee and Iorek, particularly the scene where they reunite and Iorek’s shame at losing his armour is revealed. We get a better look at Lee in the Sysselman’s office, where he drops his cowboy swagger and growls ‘He’s a bear. He can’t be a slave. Not to you, the Magisterium, or anyone. Shame on you Mr. Syssleman.’ Harry Melling turned his cameo character into a really memorable spot, it was interesting watching him struggle between rage and shame when Lee accused him of selling the North to the Magisterium, and satisfying seeing him pass out in the mud after almost being crushed by Iorek. I really liked Lyra’s line that Iorek was ‘practically Gyptian’, that like the Gyptians he has been mistreated and tricked. It gives Iorek another motivation for going to war against the Magisterium, it’s not just for Lyra who helped him recover his armour, but for vengeance for those who have suffered as he has. 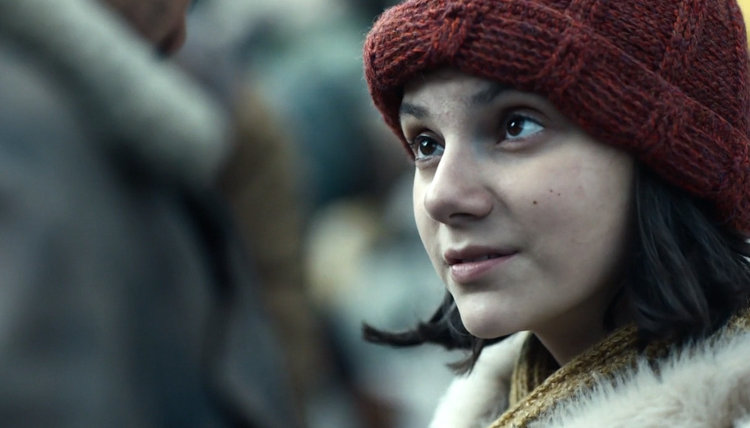 I hope this is the last we see of ‘smug Lyra’ but I think that ageing her may already be having an effect. It may not seem like much but the difference from eleven to thirteen is actually a great deal in terms of maturity. Pullman himself said Lyra was ‘not an imaginative child’1 and it is Lyra’s ability to invent, not manipulate, that so often gets her out of dangerous situations. In Armour Lyra had the upper hand over everyone, smiling triumphantly when she got her way while all the men grudgingly acquiesced to her ability to exploit them. Her gentle affection and pity upon meeting Iorek is really overlooked here, although she touches on it later on, she would never try to out-muscle him by goading him and calling him a coward. Terrible is the only way to describe that exchange. In actuality most of the older men and male characters who find themselves devoted to Lyra do so because of her young age and her goodness. Farder Coram says that ‘she’s a strange innocent creature, and I wouldn’t have her harmed for the world’.2 There’s certainly a paternalistic desire to protect Lyra, but this is because she is an actual child, and practically an orphan. It is not because she is a feisty teenager that everyone adores for her cheek. Another facet to the mens’ protectiveness of Lyra is her destiny, and this is also echoed by the witches. Everyone needs to see Lyra safe because she has a destiny to fulfil, and everyone wants to see Lyra safe because she has led a lonely life, despite being surrounded by scholars who love her like their own child. And Lyra herself returns all the affection she is given by these people, but deep down we know she longs to mean something to her father, who is unable to give her the love she desperately needs from him. 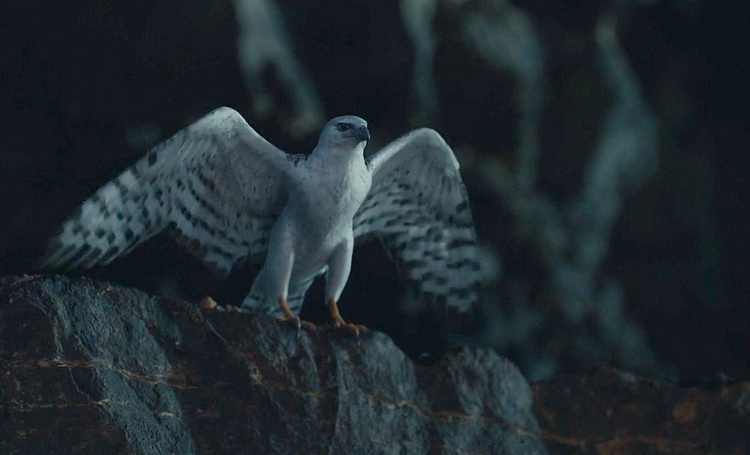 Episode 6 is titled The Dæmon Cages after Chapter 15, so I am holding out hope we will see the scene with Kaisa rescuing the dæmons from the Station. Serafina’s dæmon Kaisa being changed from a snow goose to a gyrfalcon was a surprise (‘practical’ reasons I am sure). David Suchet has given his voice a gentle regal quality which I think will work wonderfully in that scene.

As I mentioned earlier I am not convinced Lee’s honour has been deeply compromised by the pick-pocketing of Iorek’s oppressors. Had he stolen from everyone whose path he crossed it would be a different matter but Lee has come into town determined to stir up trouble until he finds his friend. I wonder if people would have been more comfortable if this was a shoot-out and people had been killed rather than stolen from, with current society’s tendency to valourise killing of people who ‘deserve’ it. Yes there is something sneaky about stealing. But the fact that Lee also doesn’t care that they know he stole from them, when Hester is nervously admonishing him before they leave with the Gyptians, also speaks volumes. The act of stealing from them was a challenge to them and by remaining comfortably in their presence Lee is maintaining the upper-hand.

We had a glimpse of Iofur in Armour and his helmet curiously reflects how Iorek ruins his face when he kills him. It was good to see the exchanges between him and Mrs. Coulter, we get an even better understanding of how he was manipulated by the Magisterium. The baptism reference was interesting, Iofur is coming across like a Henry VIII-type character, eager to make his mark but also desperately seeking approval from the church.

The Book of Dust Vol I & II 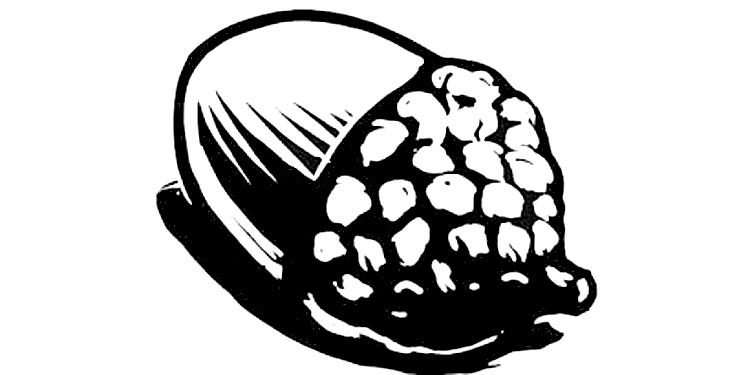 Not related to the episode but I was delighted to re-discover these letters in the back of Once Upon a Time in the North when I re-read it recently. They obviously make more sense now than prior to The Book of Dust. I am going to guess “Tom” is Thomas Nugent from Oakley Street in the first letter, and of course we know who Dr. Polstead is. 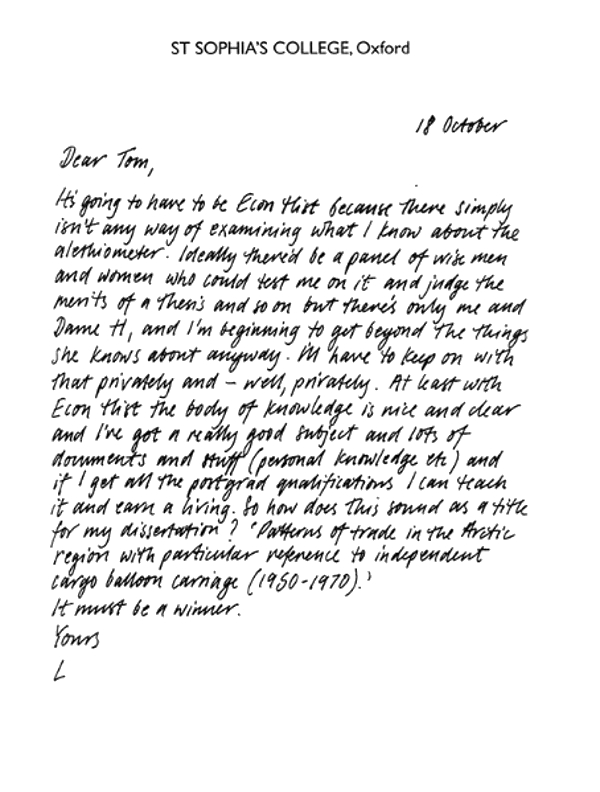 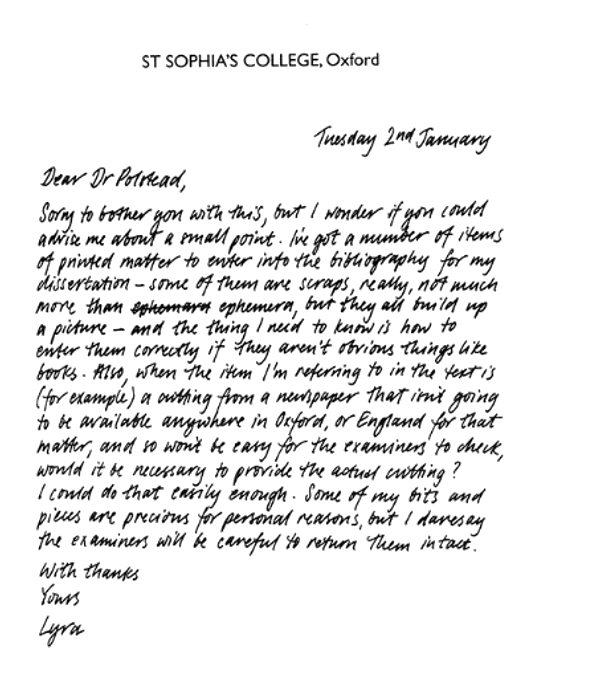 Next week: The Lost Boy

Join our friends Travis and Rich for the Daemon Dust Podcast