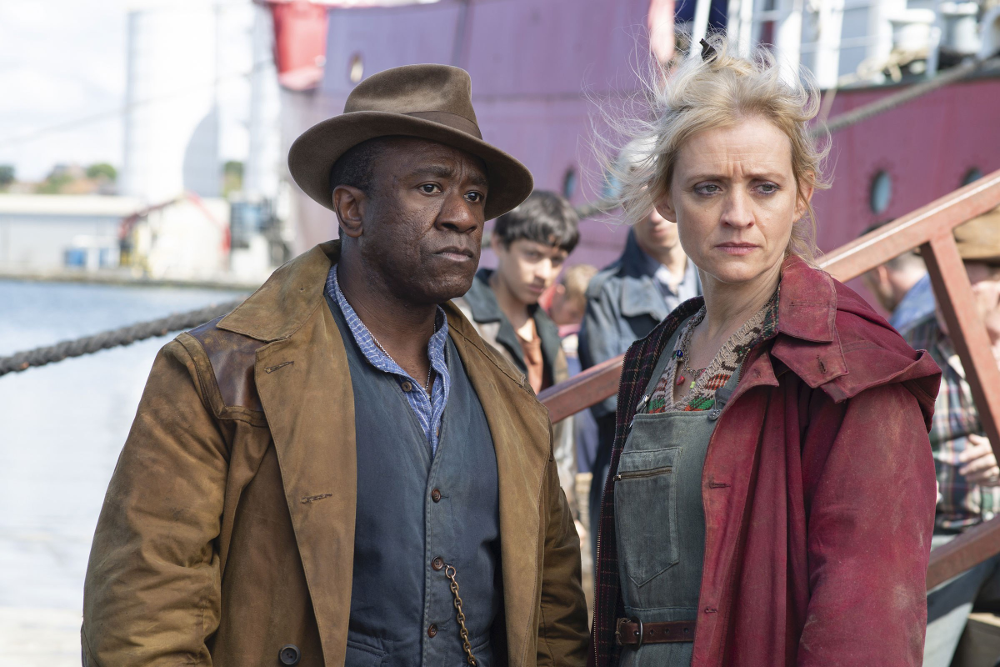 His Dark Materials: On Gyptians

The Gyptians of Philip Pullman’s ‘Brytain’ and the wider world were introduced in the first episode of His Dark Materials by way of a newly-seen coming-of-age ceremony. The community came together to celebrate the settling of Tony Costa’s dæmon Lyuba into her final ‘adult’ form. The Gyptians have always been simply described as a boat-dwelling community, but it is assumed they are loosely related to British Travellers and various nomadic European communities. People tend to associate the Gyptians with the Romani community because of the similarities in name, as Romani travellers were once known more widely as ‘gypsies’ (now considered pejorative). The English term ‘gypsy’ is derived from ‘Egyptian’. The Tudor ‘Egyptian Act’ was a response to Romani peoples arriving in England, but it was also part of numerous legislations targeting vagrancy. In it the ‘Egyptians’ were accused of fortune-telling, robbery and deceit amongst other things. The general description matches the ones I read of ‘gypsies’ as a child (in Enid Blyton’s Six Cousins series), the stereotypes still intact a few centuries later. In Tudor times there was a distinct prejudice against dark skin, that it was almost like a deformity and not in ‘God’s image’, and often ‘Egyptians’ referred to any dark-skinned immigrants regardless of origins. 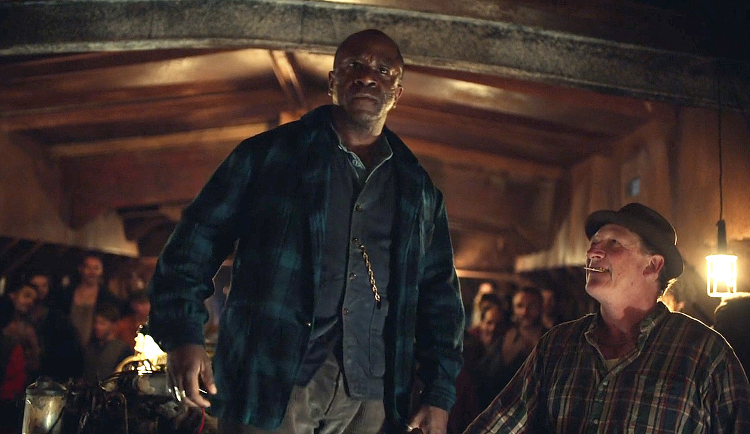 According to studies travellers experience more racism than any other group in the United Kingdom. I first read more extensively on travelling communities only a few years ago, after seeing discriminatory comments and behaviours towards a family who were temporarily staying on the vacant edge of a battlefield site. The Romani have vast sub-groups and there are, of course, Scottish and Irish travelling communities in the United Kingdom, all of who still suffer discrimination. The Welsh, Cornish, Irish and Scots have also all suffered under English sovereignty. Philip Pullman’s Gyptians encompass the wider issue of class divide rather than identifying with a specific ethnic group. When the King of Gyptians, Lord Faa, tells his people why they should show loyalty to Lord Asriel he reminds them that “It were Lord Asriel who allowed gyptian boats free passage on the canals through his property. It were Lord Asriel who defeated the Watercourse Bill in Parliament, to our great and lasting benefit.” The Gyptians, as an outsider community, have been targeted more heavily by the Gobblers. It is clear that the Gyptians represent the marginalised, but not in terms of ethnicity. The multi-cultural aspect of the group is emphasised by the range of surnames, with Dutch, Swedish and Greek surnames among the Gyptians. They also speak “Fen-Dutch”, the Fens being the marshland the Gyptians inhabit. The mention of the Gyptians having to fight for their legal rights is a significant reference to colonial activities. The real villain in His Dark Materials is the church, and despite colonialism being a strictly economical enterprise, the public were always fooled into supporting its brutal practises with the promise of bringing ‘heathens’ into the fold to be saved. The Gyptians represent one of those groups that madden the colonial government, one that exists outside its legal jurisdiction and that they cannot fully control.

To drive the point home, Philip Pullman’s Gyptians are the antithesis of the negative stereotypes surrounding traveller cultures, or indeed any culture dominated over by the white European. The dæmon-settling ceremony in the first episode,  Lyra’s Jordan, was a particularly moving scene celebrating the Gyptians’ close-knit culture. The Idea of the North gave us a closer look at Ma Costa’s pain over her son Billy’s kidnapping to emphasise how precious children were in the community. The books are told from Lyra’s point of view and nuances such as this missed in the books can be played out on screen effectively. And Benjamin de Ruyter’s role in The Spies, adapted from the chapter of the same name in Northern Lights, was expanded upon greatly to show us a heart-rending example of the Gyptian code of honour. The raid on Ma Costa’s boat also gave us an example of the Magisterium’s attitude towards the Gyptians. 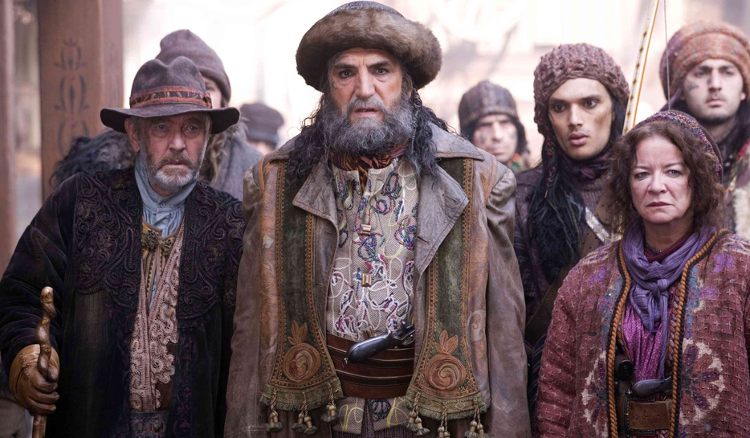 The image above is from the film The Golden Compass, where the Gyptians are depicted in fairly stereotypical attire, akin to what children might relate to as ‘gypsies’. The costume designers didn’t really address how one is supposed to get about on a canal boat in all that velvet and brocade and tassels and frippery. For the record I am very fond of the film and its wonderful cast. However Philip Pullman’s Gyptians are not described as wearing anything similar to The Golden Compass’s imagining. Pullman doesn’t go overboard in the physical description department, the first time he mentions a garment Ma Costa is wearing it she is ‘“swathed in an old tweed coat on which the damp had settled like a thousand tiny pearls.” and Tony follows shortly after, also pearled with damp to shake his woollen hat out over the stove.1 The brief description tells us both that the Gyptians wear sensible clothing and that they are constantly exposed to the elements above deck. Later Lord Faa, King of the Gyptians, is described as wearing “a plain canvas jacket and a checked shirt, like many Gyptian men; there was nothing to mark him out but the air of strength and authority he had”.2 The romanticised version of their gear in The Golden Compass certainly appealed to the fairy-tale element they were going for but wasn’t indicative of Pullman’s vision of Gyptian culture. 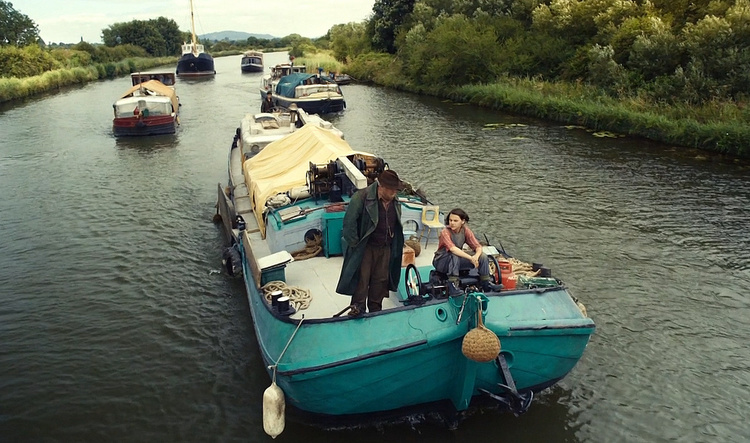 Another issue faced with depicting the Gyptians is ageing the text, while Philip remained deliberately evasive about the time setting, there was a distinct gap between Lyra’s world and the other. The series has moved Lyra’s world away from that the post-Victorian style era and well into the twentieth century. The canal boats are much more modern than The Golden Compass‘s depiction and they are also much more well-worn. One thing that His Dark Materials has depicted as markedly different from the text is Ma Costa’s wealth. Lyra describes the Costas as “noted for the grandeur and sumptuousness of their boat. They were princes among Gyptians”.3 But the obvious reason for the shabby and well-worked canal boats that the Gyptians inhabit in His Dark Materials is avoiding visible wealth distinctions between the Gyptian families The grungy aspect of the boat’s interior is supposed to reflect the carefree element of the Gyptian lifestyle against those who hoard and display their wealth. In the end, the heart of the Gyptian’s community is supposed to be about honour, community and equality.