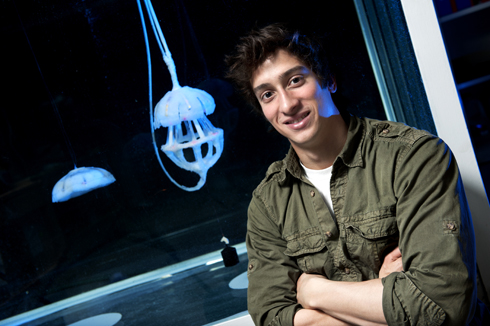 It sounds like something from the Phillip K Dick story Second Variety, the one where autonomous attack robots called ‘Blades’ not only begin reproducing themselves but begin evolving into ever more complex and cunning killing machines.
Sort of like that, but under the ocean. The U.S. Naval Undersea Warfare Center and the Office of Naval Research are funding the five million dollar project, with research and development proceeding in a collaborative effort between Virginia Tech, University of Texas at Dallas, Providence College in Rhode Island, University of California, Los Angeles and Stanford University.

The project includes engineering nanotech actuators and sensors, electrostatic and optical controls, chemical and pressure sensing, fluid and biological mechanics and propulsion, and self-sustaining energy creation. The technology is housed in a bowl shaped shell, which is then covered in a synthetic jellyfish-like skin.

Swarms of RoboJelly could one day patrol the oceans, detecting and cleaning oil spills and other environmental hazards, gathering information for scientific research on ocean currents and marine life, or be used for military surveillance.

The frightening idea of swarms of weaponized autonomous RoboJellies launching chemical, biological or ballistic attacks, or attaching themselves to ships or infrastructure and self-detonating, is, perhaps, a nightmare scenario from science fiction. However, with drone systems in use in the US, China and other countries, it seems to be an inevitable advance in the evolution of remote and unmanned weapons being deployed around the world.
See full story on vt.edu