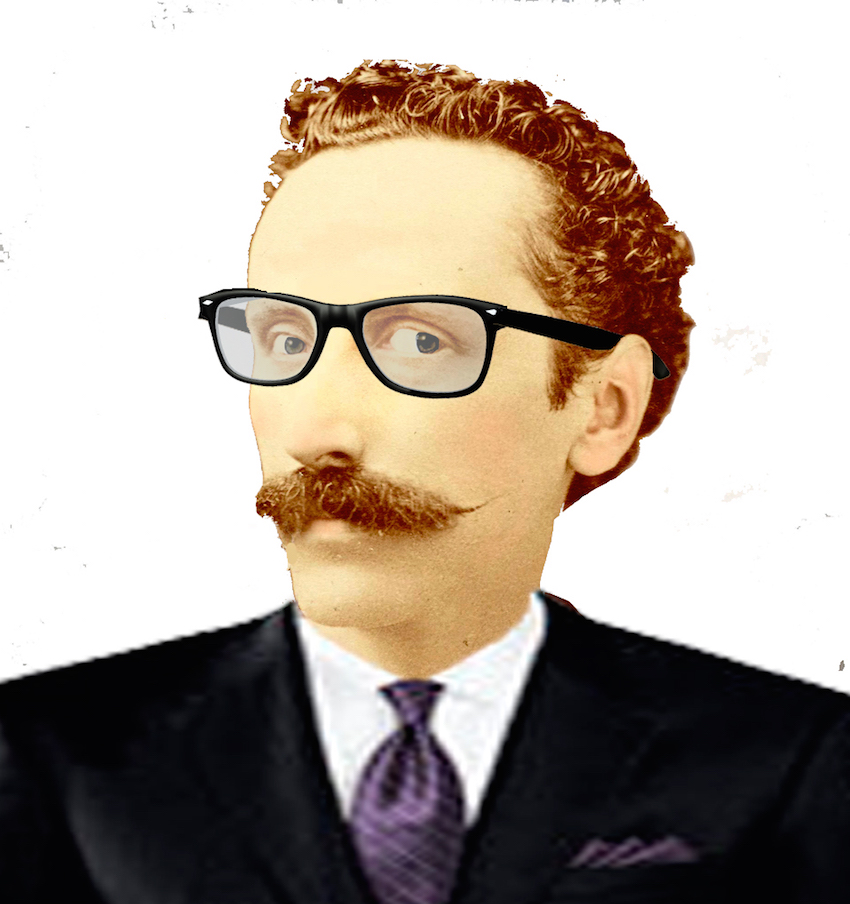 Howard P Hohenzollern has been called by some the “Guru of Mediocrity,” though Hohenzollern himself disputes this epithet in the new introductory chapter of his book, How To Be Happy By Giving Up Your Dreams And Embracing Your Mediocrity, A Self-Help Guide for the 99%, where he says, “I am certainly no guru. I am more like a sixth grade substitute teacher. Not the one that inspired you to to explore the Metropolitan Museum. The one who doesn’t want to be there, the one who told you that the answer is 72 because it says so in the answer key, and it doesn’t matter if you can’t get a train from Hoboken to Teaneck. You won’t find satisfaction in the Metropolitan Museum.” We can’t agree with him more. Except during a temporary exhibition on the history of contemporary popular music.

Howard Hohenzollern discusses satisfaction a lot. However, ever prudent, he doesn’t mention a song which he can’t mention for copyright reasons. “When we mean happiness,” he says,  “we really mean satisfaction. Think The Turtles, not The Rolling Stones. It’s all about gathering the right kind of moss.”

The first chapter presents some very boring statistics. 99% of people aren’t successful, and will never be successful, of those who try and aren’t successful, 92% aren’t satisfied, the other 8% are deluded. The way to achieve satisfaction is to just try a little, then settle for third best, which is what you really wanted in the first place. Yesterday’s muffins are as nearly good as fresh, and a little cheaper. Why be a hippy, when you can just wear flowered pants? He asks in one chapter, devoted to the environment, and answers, rather cryptically, “Flowered pants have done more for the environment than hippies ever did, and they make you feel good, they are better than sweatpants, but not nearly the full Chanel. Ladies, you know what I mean.”

In a reminiscence at once poignant and eye-watering, we are next subjected to a view of how Hohenzollern’s philosophy emerged out of the experiences of his formative years, “Like everyone, I was told I could be anything and do anything I wanted as a kid. My dad would sit on the couch, groaning as the Texans fumbled another ball, and telling me, ‘Kiddo, you’d make a better QB than that dumbass. Pass me the potato chips.’ I was 97 pounds of grade A wet cheese, I knew I could never be a QB, especially as cheerleaders had held my head in a toilet bowl and told me expressly, ‘You will never be a QB’, a date from which I have many fond memories, so I’d walk up to dear old dad, chips crunching underfoot, and I’d say, ‘Dad, I don’t want to be a quarterback, I want to be an astronaut.’ Dad would adjust his glasses, and with a look of patriotic love and deep concern, he’d say, “My boy, the Russkies sent a dog into space, you’re at least as smart as any Russkie dog, so you go be an astronaut.’ Then I found out that astronauts actually needed to be able to calculate how far a bird could fly between two trains heading toward each other on the same track at different speeds from Hoboken to Teaneck, and all I wanted was the price of a ticket and for that darn bird to get what’s coming to him. Dad used to call me ‘Howard, we have a problem’ after that, which he eventually just shortened to Problem.”

Howard’s father’s innocuous life of following professional sports and working in middle management in a Fanta bottling plant ended in a tragic stale Cheetoh accident in 1989. The young H.P. states that his father was was a powerful source of his inspiration to only mild aspirations.

Howard ‘Problem’ Hohenzollern’s first principle of embracing your true mediocrity is embodied in the statement, “Always remember, you are onionique, just like everybody else.” Onioniqueness expresses the layeredness of the onion, and the Zen like concept of the sameness in uniqueness, or what he calls, Un-iqueness.

The second in his Principles Of Satisfactoriness is a quote on the rigours of ambition from Izaak Walton’s 1653 book on fishing and philosophy, The Compleat Angler, “Nature hath made them of a sowre complexion, money-getting-men, men that spend all their time first in getting, and next in anxious care to keep it; men that are condemned to be rich, and then always busie or discontented: for these poor-rich-men, we Anglers pity them perfectly, and stand in no need to borrow their thoughts to think ourselves so happy.” The eyes of a giant squid may be the size of basketballs, H.P. says, but his tentacles make good bait.

The last of Hohenzollern’s 6 Principle’s Of Satisfactoriness is embodied in the phrase, The Smile Is Extra. While business encourages enthusiasm, participation, positivity and best practice, with the promise of possible future reward, the esteem of peers, the adulation of superiors in the ‘expectation hierarchy’ that leads to ‘job satisfaction’, the actual employment situation for most people is that they will receive the exact same reward regardless. Thus, to achieve happiness, one must embrace one’s mediocrity by accepting the motto, I HAVE A LOW PAID MENIAL JOB, THAT’S WHY, THE SMILE IS EXTRA. 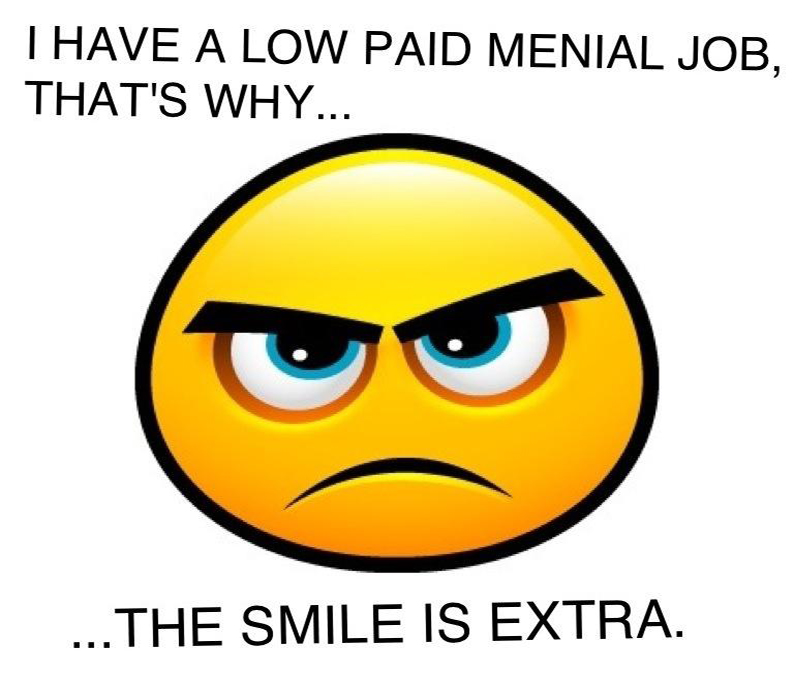 The sad fact is, that while many of us are told throughout childhood to seize the moment, to chase that dream, to never give up, that we can be anything we want to be, the truth is for the vast majority by the time we enter into adulthood, because of our own predispositions, delusions of competence, genetic inadequacies, personality deficients and the morass of social conditioning by which those that have gone before drag down like desperate brain craving zombies those that follow, most of us to be happy should miss the moment, forget the dream, be only that which we don’t want to be.

I’m not exactly sure what cocking a snook is, it sounds kind of unpleasant and possibly painful, but in the chapter Cocking A Snook at Fame he does exactly that; examining how any half-baked dill or tawdry warbler can now be purported as an idol or master in their respective fields after tap-dancing their way through some lumpy puddings. Hohenzollern suggests the best way to consider base narcissistic urges, the demented spurs to fame, is not in a 15 minutes of splurge or even a memefied moment, but rather with his fifth tenet; Life Is Mostly Crumbs, So Let’s All Have Some Cake.

Spongiform treats aside, perhaps with a little Worcestershire, in the same way supping on the brains of their enemies caused cannibals to both develop brain diseases like Mad Cow and Creutzfeldt-Jakob’s, and then in later generations developed genetic resistance to those dementias, the illusory talents of former generations has resulted in a debilitating urge to achievement whose only treatment is to wallow in complacency.

To achieve success at mediocrity he says, you should apply some scientifically proven mathematical technique by using the HP rule. H stands for How many times you attempt to make your dreams come true, P stands for the Probability of achieving that success. The value P is small and completely outside your control, the value of H can be large as you can make it. Given that probability is expressed as a fraction, and that when we multiply a fraction (P) with a whole number (H) the result of HP will always be less than the original H. Is HP=Happiness a formula for success? I’m no mathematician, but if your dreams are cheeseburgers, and your goal is to provide minimum standards of service, then it might be true.

Howard ‘P’ Hohenzollern’s book How To Be Happy By Giving Up Your Dreams And Embracing Your Mediocrity, A Self-Help Guide for the 99% is available in all bookstores, well, not the good ones. 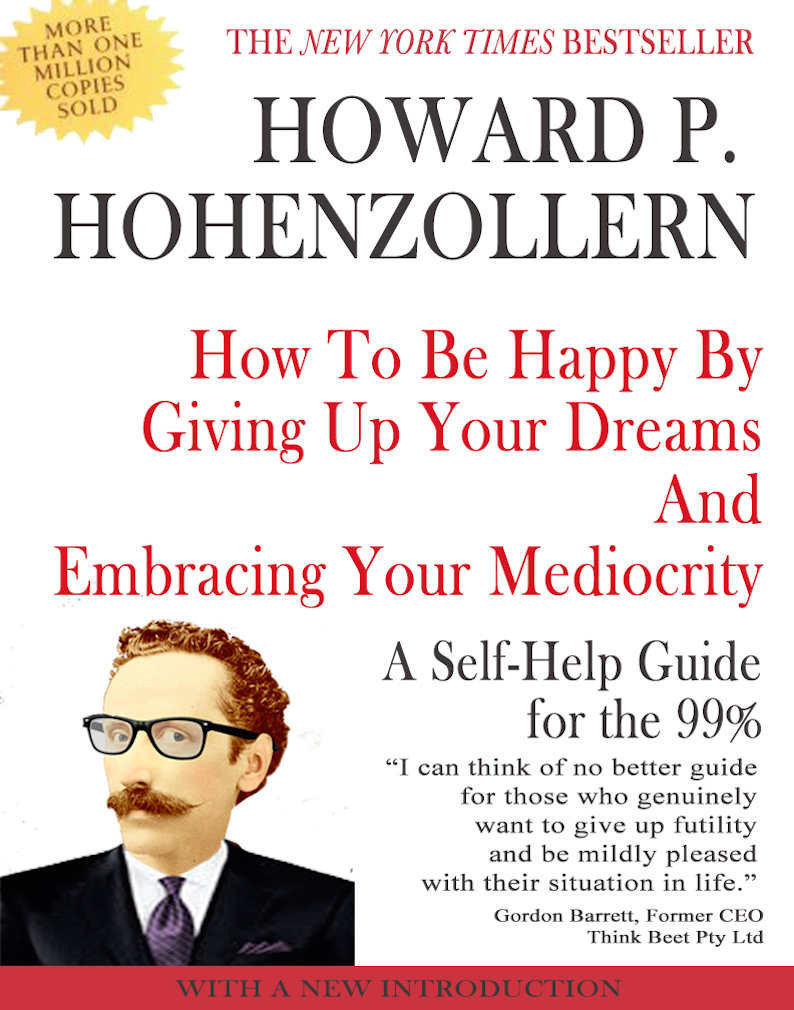