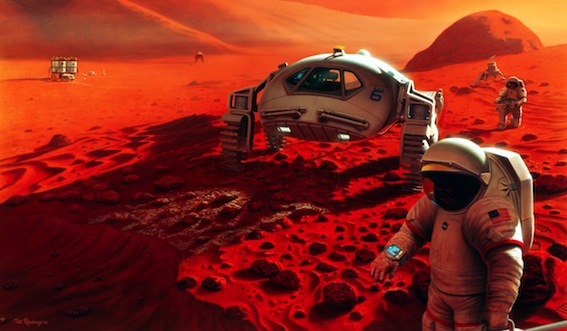 Is There Life On Mars? Yes, And It’s Us, And We Were Goo

Professor Steven Benner, Geochemist at the Westheimer Institute for Science and Technology and member of the Foundation For Applied Molecular Evolution science thinktank, argues that life on Earth began on Mars. In a statement released today he has argued that the chemicals required for life were blasted off Mars some three billion years ago by volcanic eruptions or asteroid strikes, and rained down on Earth in meteorite showers.

A highly oxidized form of molybendum, crucial for catalysing the elements of life into the first organic structures, could not exist in the oxygen poor environment of  Earth when life first developed here three billion years ago. At that time Mars had an energetic geothermic system and an environment rich with oxygen.

Early life probably developed from a tar-like goo, the result of various minerals joining, catalysed by boron and oxidized molybdenum into the fundamental stuff of life.

“Analysis of a Martian meteorite recently showed that there was boron on Mars; we now believe that the oxidised form of molybdenum was there too.”

Again, it’s unlikely the required boron was available on Earth. Earth was covered by water, and water would have prevented sufficient concentrations of boron forming, argued Professor Benner.

“It’s yet another piece of evidence which makes it more likely that life came to Earth on a Martian meteorite, rather than starting on this planet.”