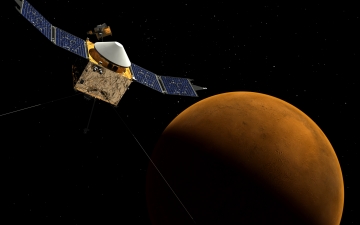 NASA’s Goddard Space Flight Centre has released a remarkable CGI video which shows the possible evolution of Mars over the last 5 billion years.

To discover the truth about the changes in the Martian terrain and atmosphere, NASA is launching the Mars Atmosphere and Volatile EvolutioN Space Probe – scheduled for blast off on Monday, 18 November at 1.28 PM US EST.

The dry river beds and canyons on Mars, (which speculation once held were canals of a Martian civilization) and the discovery of minerals that form only in the presence of water indicate that Mars once had a thicker and warmer atmosphere, and was warm enough for liquid water to flow and pool on the surface. Scientists theorize that as the planet’s core cooled its magnetic field weakened allowing solar winds to strip away atmosphere, moisture and other elements.

An array of sensors including Ion, Mass and Ultraviolet Spectrometers, Particle, Magnetic and Solar Wind Analyzers will record with the highest degree of accuracy and detail yet the magnetic and particulate conditions in the Martian atmosphere.

From this data scientists will be able to infer how changes in the Martian atmosphere, as predicted in the video, have evolved over time. With, perhaps, important correlations and revelations for atmospheric changes here on Earth.

In the video below, LeVar Burton who played the enthusiastic Enterprise engineer Geordi LeForge in Star Trek: The Next Generation’s explains why, NASA has gone back to Mars with the MAVEN project, and why it is important.