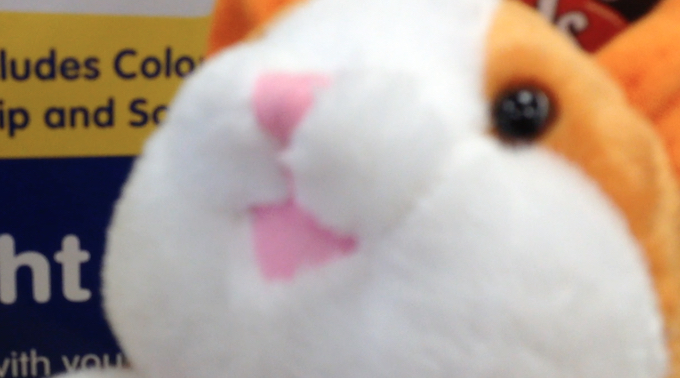 C S Hughes
Ridiculam Mundi
December 14, 2014
Hamster, penguin, monkey. Like dog, cat, mouse, a triumvirate that epitomizes a hierarchy of cuteness. As demonstrated by Darwinian natural selection, it is neither the will to dominate, the savage ascendancy, red in tooth and claw of the apex predator, nor the urge to reproduce en masse, to replicate like slime or some other low organism, that is the primal force, but rather a universal evolution toward greater cuteness. DNA has no other voice, except to cry – love me!

These three cute toy animals were discovered in their natural habitat: the shelves of the toy section in a discount supermarket. They are Chatimals; to give them the name by which they are branded. By a simple device they repeat any word, or phrase, or noise. Press a little paw (or flipper) and it glows redly. Speak and your utterance will immediately be repeated. No miracle of rare device here, no complex animatronics, clever automata, or even engaging programming. This is a discount arena afterall, requiring only a low orderof toyiciousness.

However, arranged in a circle, given a simple phrase; in this case a juvenile, penguine “Wa wa wa,” the sound is caught by one; repeated in a cartoonish, metallic voice. Flashing silver, like an idea, a maelstrom, looping, feeding back, caught by another, and caught again.

From there things grow harsh and severe and quickly escalate. Konstantin Raudive found the voices of the dead in the background static of the universe. Uproarious evangelists decried the sounds of Satan in backmasked metal. A million madman have heard the cries of damnation and derogation in TV white noise.

But it is in the escalating scream of monstrous tin voices, like nails scraped to the bone on a blackboard harshened by interminable abrasions, in a realm unspeakably cute, cute beyond repair, cute beyond remedy, a ludicrous seance, a rampant ring-a-rosy, an unremitting circle of hostility, repeated and unrepented, incomprehensible and unintelligible, that we may truly hear the deranged and despairing utterances of hell.

Like a cheeky monkey, you may hear no evil; if you add a drum track to a wail from the underworld, hell be damned, that’s just rock ‘n’ roll.