The Ricardian Volume I October 1961

I’ve been sorting through a veritable treasure trove of The Ricardian this evening, having received a very kind gift from the partner of a long-time member of the Victorian branch, Kirk Bradbury, who passed away recently. I was delighted to find a full set of issues from the 1960’s. This is the very first issue, published for Richard III’s birthday in October 1961. 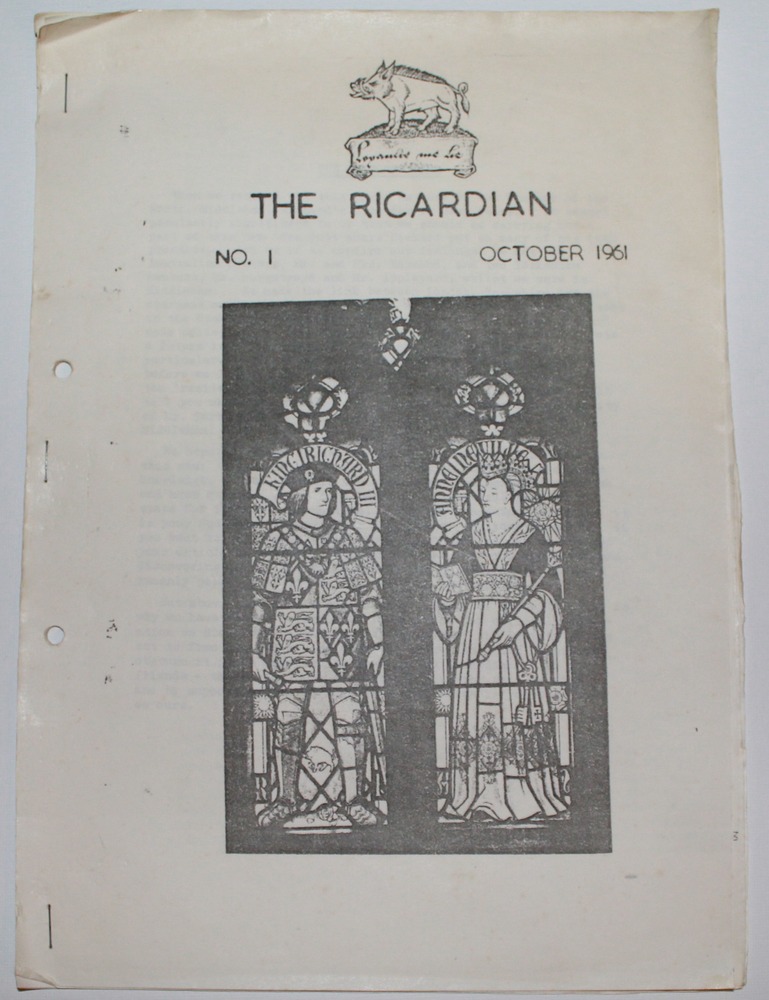 Secretary Isolde Wigram opens the inaugural issue discussing how the Editor’s page was ‘roughed out’ in Middleham, where she had caught up with Mr. and Mrs. Raymond from Australia and Mr. Murgatroyd and Mr. Appleyard of Yorkshire.

We hope in future issues to follow the general plan used in this one: a learned article, something to test your Ricardian knowledge, a poem, letters and questions from members, research and news reports, and a book review. There will also be a space for fixtures and notices. But this magazine in yours: it is your Speakers’ Corner, your Parliament and your Hansard…

But above all this magazine is on behalf of Richard: this is why we have chosen to edit the first issue for official publication on Richard’s birthday. As members of the Society we are set to free Richard’s name from the calumnies which at present obscure it. We ask you, by passing The Ricardian on to your friends – there will be a few extra copies for sale as well – and by supporting us, to help this work which is yours as well as ours.

This is the first poem published in The Ricardian, a decidedly romantic one titled Aftermath by Christine Wiseman. The “e”s are not coming up too well in the photo. C.S. thinks this was probably done on a mimeograph, which was a popular way to print fanzines before photocopying. 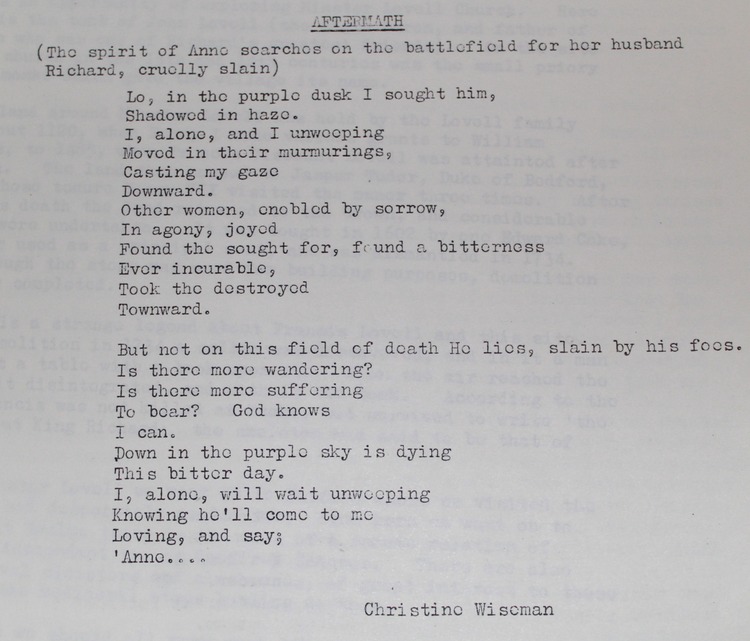 Isolde Wigram contributed Common Sense about the Princes, the crossword is titled Chairman’s Folly – A Crossword with Plantagenet Overtones, letters from readers appeared in the Ricardianly Yours section, Elizabeth Hall reported on a visit to Minster Lovell and Dorothy Broome contributed a Research Report on Napoleon  and Richard III. The Book Review by Muriel Meredith discussed “York Records of the XVc compiled by Davie in the last century” and rather entertaining sounding novel by Lord Lytton, The Last of the Barons.

This is not principally a study of Warwick the Kingmaker, as the title suggests, but an adventure story about a poor inventor and his daughter Sybill during the years 1470-1471. The inventor becomes involved in a plot to smuggle letters to the imprisoned Henry VI from his wife Margaret of Anjou. The mission is discovered but the Queen’s mother believes the invention used to smuggle the letters to be magic, and having persuaded King Edward to pardon the inventor, appoints the man her chief magician and his daughter one of her maids…There is an unsympathetic picture of Richard and a curious account of an attempt by Edward to seduce Anne Neville.