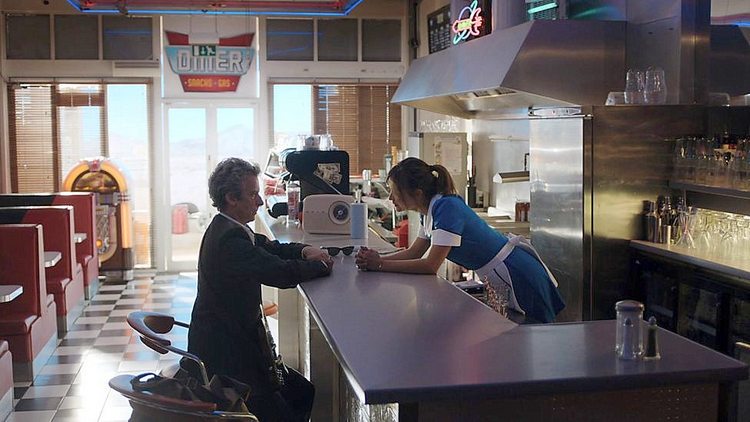 The first of the two part finale of Doctor Who Series 9, Heaven Sent, was one of the most superb episodes of the New Who era. Darkly philosophical, mind-bending and terrifying, the Doctor is trapped in an endless loop of his own memories and grief. Wracked with guilt and despair at the death of his best friend, the Doctor spends billions of years mired in perdition, living the same day over and over while he tries to shatter the final wall, the wall trapping him inside his own custom-made hell. Azbantium. Four hundred times harder than diamond. Twenty feet thick. The way out. We could only watch in horror as we realised the Doctor had been trapped inside his own confession dial by his own people. Two years in fan-time after The Day of the Doctor, the Doctor had finally made it home to Gallifrey.

In a stunning contrast from the damp medieval gloom of Heaven Sent, Hell Bent opens in parched and blinding desert landscapes. The Doctor strolls into the same diner most fans would instantly recognise from The Impossible Astronaut. The Doctor himself remembers eventually. He sits down to talk to ‘Clara’ working as a waitress in a diner in the middle of nowhere in the American desert. She doesn’t seem to recognise him. Is this a ‘fragment’ of Clara, one of the many splinters of herself she created when she threw herself into the Doctor’s timestream on Trenzalore? 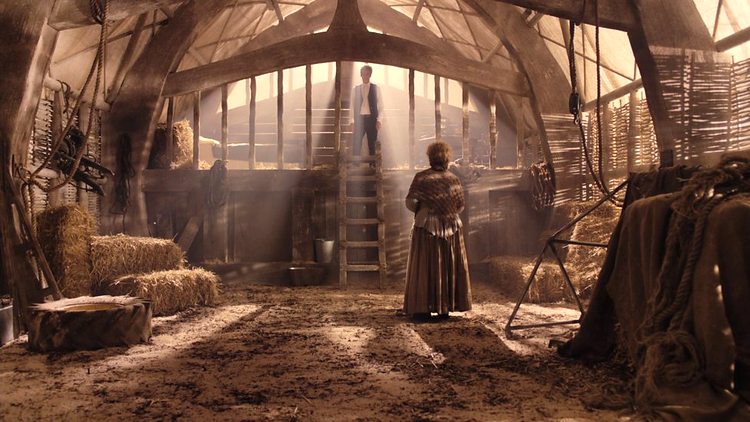 And then, after watching the Doctor talk to himself for an entire episode, we are back on Gallifrey and he is silent. He ambles across his desert planet like a cowboy from the episode’s namesake, the 1918 John Ford western. He visits the barn where he was raised, where he made one of the most difficult decisions of his life. The same barn where Clara Oswald comforted a little boy. And one day, you’re going to come back to this barn. And on that day you’re going to be very afraid indeed. But that’s okay. Because if you’re very wise and very strong, fear doesn’t have to make you cruel or cowardly.  The same barn where Clara Oswald talked him out of making that decision. We’ve got enough warriors, and any old idiot can be a hero. Do what you’ve always done. Be a Doctor.

The sometimes wordless exchanges between the Doctor and the Woman (played by Linda Broughton) were glorious. Even the Doctor answers to a mother figure. But the admiring group of Gallifreyans watching the Doctor eat his soup remind us of something we might have forgotten. The Doctor is not only a rebel, a misfit, a knight errant – he is a war hero on his own planet. I suspect it was not by design, but the most powerful image in Hell Bent, and arguably in the whole series, is the Doctor flanked by soldiers who have cast their weapons to the ground and stood with him, united in defiance before the warmonger Rassilon. The image embodies the questions that have encompassed Doctor Who in The Day of the Doctor and since Deep Breath, am I a good man and can there be such a thing as a good solider? Perhaps the Doctor is closer to an answer. 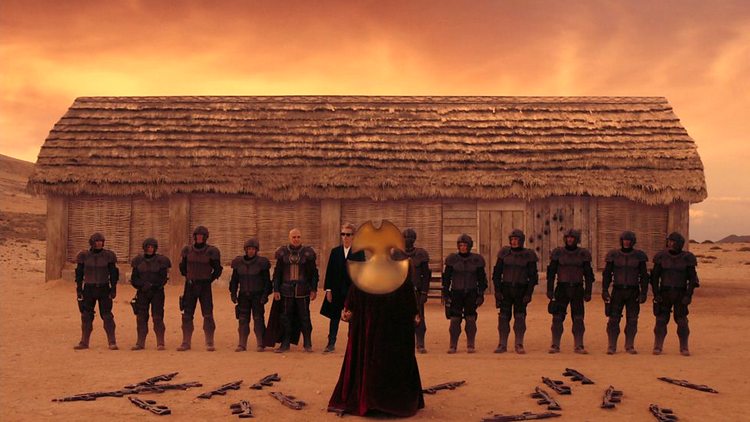 However, the overthrow of Time Lord High Council, turning the Doctor’s trap into a triumphant return to his adoring people, was all a ruse. The Doctor only wants to get inside the city so he can save his companion and best friend Clara Oswald, from certain death. The last three episodes of the series were, in fact, all about Clara. The dangers of immortality and the study of death and grief certainly do have a presence in Hell Bent, but it seems that Steven Moffat was himself hell-bent on giving Clara the absolute opposite exit he had planned for her last year.

Last year Jenna Coleman was supposed to leave after the Christmas special and the Doctor Who writers spent the entire series preparing fans for it in the most mind-numbingly boring way possible, with the presence of an oafish boyfriend Danny Pink who disapproved of Clara being independent and adventurous. When Danny Pink died, not in a space adventure, but in a car accident, we assumed Clara would want to give up her travels through space and time, mourn her lost love and move on with her life. We put up with Clara’s various inexplicable and unreasonable personality changes throughout the series and, as a result, Clara Oswald lost quite a few fans. So it seems that this year it was decided that Clara would have a somewhat less drawn-out exit, but one that was infinitely more nonsensical. 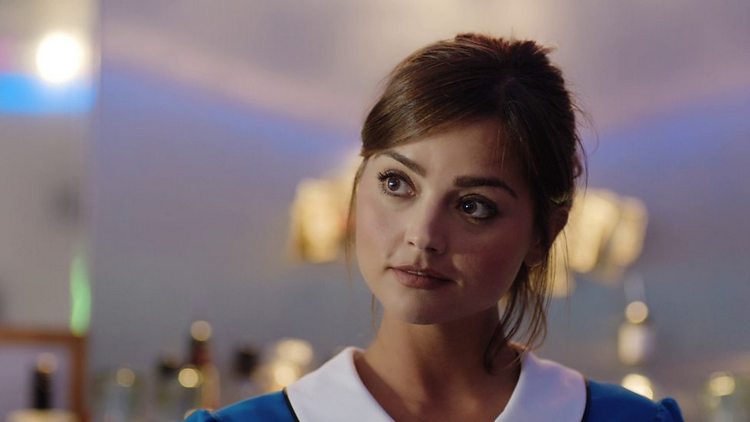 There are several things about Clara’s death in Face the Raven that made little sense, the main issue being that Clara has existed in an infinite number of ‘splinters’ of herself throughout the Doctor’s entire existence. She has died an infinite amount of deaths already, and the Doctor has already broken the rules many times before. It was shabbily done and not a deserving exit for a character who was been built up as the most important and influential of the Doctor’s companions to date, advising and assisting him throughout his entire life span.

That the Doctor snatched Clara from the jaws of death was only fitting. Slightly problematic was the story of the Doctor’s return to Gallifrey and the casual overthrow of the entire Time Lord High Council, shifted aside to make room for Clara’s departure. Nor was the Hybrid prophecy satisfactorily explained, as it has the rather interesting potential of that slip of the tongue all the way back in 1996, the ‘half-human’ Doctor. The Doctor/Companion hybrid, while giving an explanation for why Missy brought Clara and the Doctor together, lacked conviction. Still, I am sure the storylines will make a return at some point. After enduring Clara’s death, the Doctor’s grief, and Clara’s resurrection most fans were probably ready for a happy ending. 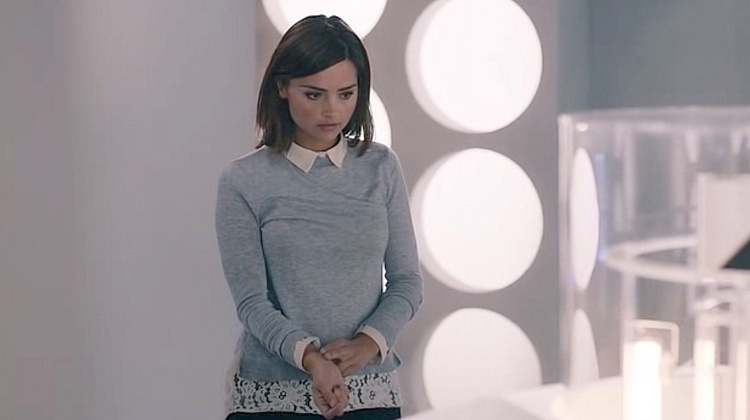 And we were given all the promise of a happy ending, with the Doctor stealing a TARDIS (with a gorgeous vintage interior) and escaping into space with Clara. Only the Doctor’s plan doesn’t work. Clara still doesn’t have a pulse, she is still trapped before her last heartbeat. And when the Doctor takes Clara to the very end of the universe itself to cheat her death, there’s the reminder. Ashildr, or Me, awaits, watching the last stars in the universe die, knocking four times. The sound of impending death. 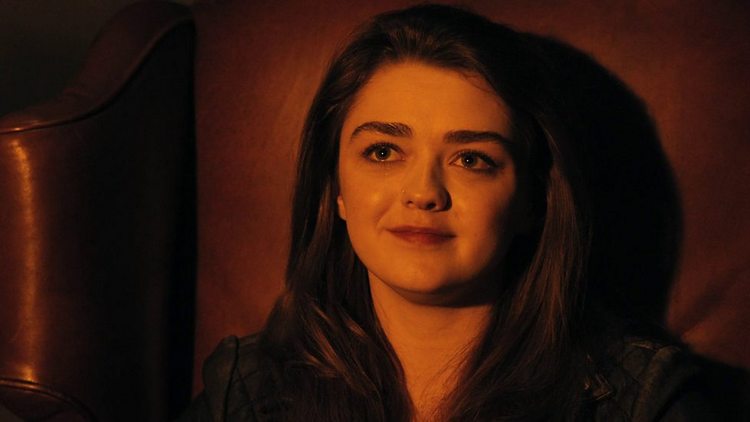 Ashildr’s presence here, at the end of the universe, the last of the immortals, is hugely significant. Ashildr, ever caustic, ever mistrustful of the Doctor, did not hesitate to betray him to the Time Lords. She is not the Doctor’s ally. Ashildr claimed that she would be there to pick up the pieces when the Doctor left people behind, yet all she has done is wreak havoc and cause pain. Like the Doctor’s face, Ashildr serves as a reminder. A reminder to the Doctor that defying nature to avert a tragedy does not always have a happy ending. That no matter how much we miss our loved ones and wish we could see them one more time, to bring someone back from the dead would have dire consequences. So here, at the end of the universe, stand two immortals in defiance and despair.

Earlier this season Ashildr lamented “the trouble with an infinite life and a normal sized memory.” She kept diaries to remind herself of her past, yet tore out pages of memories that were too painful. The idea of the danger of destroying memories to escape pain is another philosophical question that is often explored in the genre. Our memories, both happy and painful, should serve a purpose. Each time Ashildr destroys one, however weary she is of living, she destroys another part of herself. Clara is horrified and angered when she learns that the Doctor plans to wipe her memory to keep her safe. These have been the best years of my life, and they are mine. Tomorrow is promised to no one, Doctor, but I insist upon my past. I am entitled to that. It’s mine.

Clara Oswald did get the farewell she deserved, in the end and after a very long journey. She took control of her own destiny and left on her own terms. She said goodbye to her best friend and thinks she left him in peace. Clara even got her own companion and her very own TARDIS. Now Clara is trapped between one heartbeat and her last, on her way to Gallifrey, the long way round. So, run you clever girl. 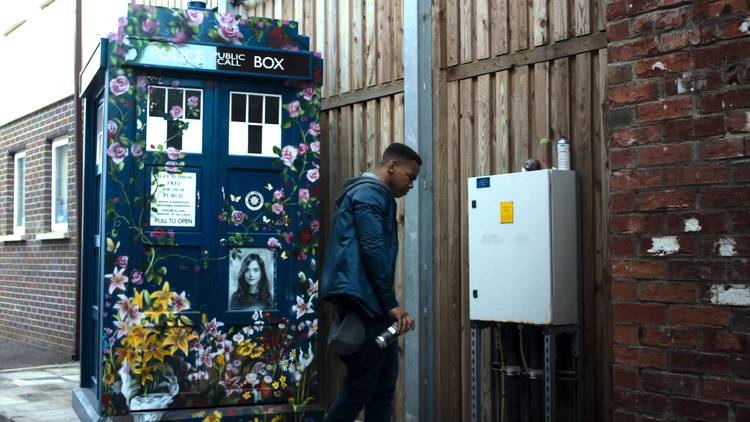