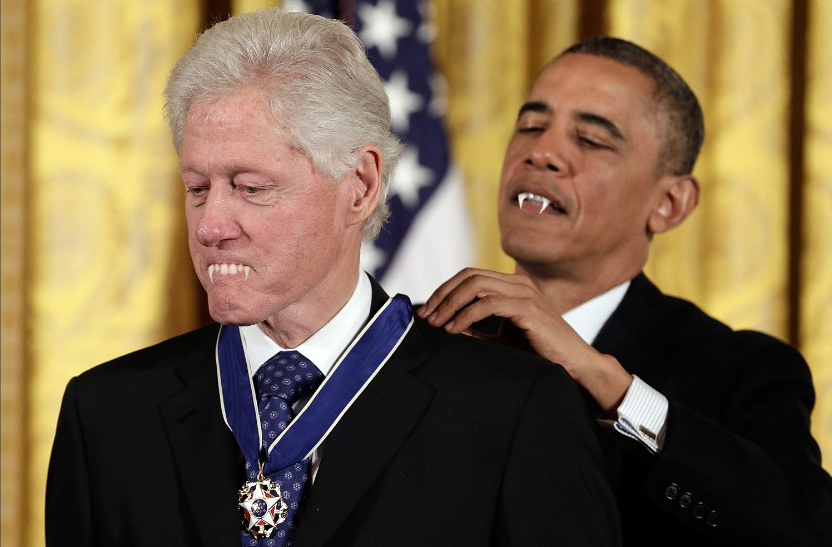 All The Presidents Vampires

It has long been observed by media pundits that in recent times after leaving the office of President, even after a single term, the former holder of the most powerful position in the world is reduced to a shadow of their former selves. Their hair turns white, their skin creased and sallow, a lifelessness to the eyes. No longer bearing an air of resolution and power, instead they have a kind of smiling, gormless vacantness, that one might expect in the senile or mentally deficient.

Some commentators ascribe this change to the fact that they have just come out of one of the the most stressful and demanding jobs in the world. Others have noted what is more surprising; that in the time they held office, not only have they demonstrated remarkable health, strength and energy, they seem to have aged hardly at all.

Sources opposed to Donald Trump in the secretive White House Medical Directorate have finally revealed the reason why; since the Presidency of Ronald Reagan, the President has been treated with a blood based replacement rejuvenation therapy. In effect, the President is a vampire!

George Washington Crile, while a professor at Case Western Reserve University in Ohio, developed the first successful direct blood transfusions for the extension and maintenance of the life of the patient during surgery in Cleveland 1906. Crile is also noted for developments in the use of opioids and cocaine as anesthetics, and contributed greatly to knowledge in neck dissection.  However it was the patient to patient blood transfusion that proved to be his most remarkable contribution, aiding in the preservation and extension of life during surgery in hospitals and through two world wars. It was perhaps only moral objections that saw the treatment restricted to surgery and other life saving procedures. While it was apparent to those in the field of haematology that blood transfusion could be remarkably efficacious in maintaining the strength and extending the life of patients who otherwise had no illness, this information was carefully kept from the public.

George Washington Crile, Jr. studied medicine at Yale, and was a member of Skull & Bones, the secret society that gained unwanted notoriety when it was revealed that President George W Bush was a member. George Crile III was a journalist also well connected in Washington and in Moscow, covering crises in international relations. His investigations into the US and Soviet nuclear weapons programs led to a series of summits that are often credited with being instrumental in the fall of the Soviet Union.

It’s not surprising that George Crile III covered the assassination of Ronald Reagan, and according to WikiLeaks sources, to prevent the collapse of negotiations, provided his father’s and grandfather’s blood rejuvenation techniques to revive the assassinated President.

Recent parallel research published in Nature has revealed that transfusions of the blood from young to aged recipients reverses age related impairments in cognitive function, cell and synaptic plasticity. Microscopic examination of the cellular structure in these experimental subjects shows the body itself begins to reproduce cells with all the hallmarks of being much younger than the biological age of the recipient.

This has long been known by a few White House insiders, the Presidents themselves, and the White House Medical Directorate; who as well as administering the transfusions, have researched and refined the “whole blood” technique, imbuing them with not only supernatural vigor, but the ability to mesmerize large sections of the population. Covered under a classified section of the Internal Security Act, the information has been kept secret from the American public. To reveal that every American President for the past 40 years is a medical vampire, is an act of treason and a death penalty offense.

The anonymous whistleblower who finally spoke up, an anesthetist tasked with knocking out the donors so they had no memories of the procedure, said in a statement explaining why he broke his silence, “Ronnie Reagan was like a clockwork zombie after we brought him back. Donald Regan would whisper in his ear, and Ronnie would repeat whatever he was told, which I can tell you, lead to some trouble. The technique improved after that, the addition of a myelinogenesis factor from the donor blood, that replaced aged myelin with young myelin. Bush Senior was a bit lizardy. Bush Junior basically acted like a twelve year old. Clinton, he insisted on virgins, female virgins. It wasn’t necessary to the technique, he just liked it like that. Hilary secretly got into Bill’s supply, but it didn’t make much difference. I figure she’s always been a bloodsucker. Barry’s a good guy. He’s got that mojo, and a big appetite. But that Trump, he’s beyond the pale. Not my vampire, not my President.”