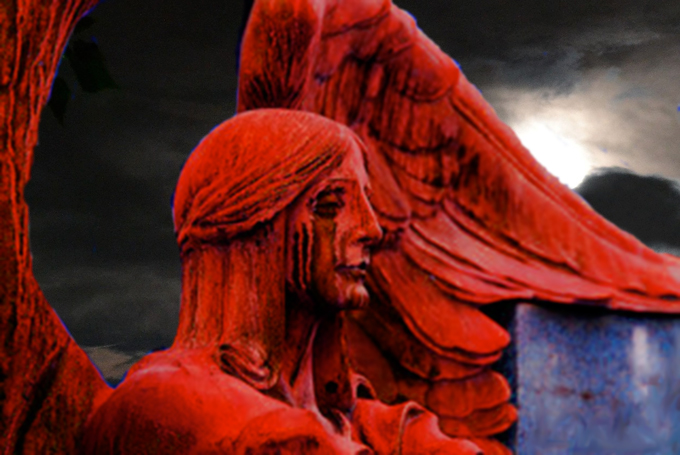 Conrad Aiken The Vampire (1916) A Poem For Halloween

Conrad Aiken is an American poet, playwright, novelist and essayist. He was born in 1889 in Savannah, Georgia. His parents William and Anna were from a wealthy and prominent New England family. His father was respected physician and brain surgeon, who, in the winter of 1901, for reasons inexplicable, turned angry, unstable, violent. On February the 27th William shot himself and his wife. Conrad heard the shots and found the bodies.

Conrad moved to Massachusetts where he was raised by his aunt, later studying at Harvard where he edited the Advocate with T S Eliot. His later poetry and novels explored both spiritual and psychological depths, his early work, informed by grim tragedy, is the perfect, chilling read for Halloween. So turn the lights low, the noise machines off. Hush the children. You may want to stop half way through, to bolt the windows and lock the doors.

The Vampire appeared in his second published work Turns and Movies and other Tales in Verse (Houghton Mifflin, Boston, 1916). Conrad Aiken (1889-1973) is a fascinating figure, part of a great literary clan, including his daughters Jane Aiken Hodge and Joan Aiken. Read more about his life and work here.

She rose among us where we lay.
She wept, we put our work away.
She chilled our laughter, stilled our play;
And spread a silence there.
And darkness shot across the sky,
And once, and twice, we heard her cry;
And saw her lift white hands on high
And toss her troubled hair.

What shape was this who came to us,
With basilisk eyes so ominous,
With mouth so sweet, so poisonous,
And tortured hands so pale?
We saw her wavering to and fro,
Through dark and wind we saw her go;
Yet what her name was did not know;
And felt our spirits fail.

We tried to turn away; but still
Above we heard her sorrow thrill;
And those that slept, they dreamed of ill
And dreadful things:
Of skies grown red with rending flames
And shuddering hills that cracked their frames;
Of twilights foul with wings;

And skeletons dancing to a tune;
And cries of children stifled soon;
And over all a blood-red moon
A dull and nightmare size.
They woke, and sought to go their ways,
Yet everywhere they met her gaze,
Her fixed and burning eyes.

Who are you now, – we cried to her –
Spirit so strange, so sinister?
We felt dead winds above us stir;
And in the darkness heard
A voice fall, singing, cloying sweet,
Heavily dropping, though that heat,
Heavy as honeyed pulses beat,
Slow word by anguished word.

And through the night strange music went
With voice and cry so darkly blent
We could not fathom what they meant;
Save only that they seemed
To thin the blood along our veins,
Foretelling vile, delirious pains,
And clouds divulging blood-red rains
Upon a hill undreamed.

And this we heard: “Who dies for me,
He shall possess me secretly,
My terrible beauty he shall see,
And slake my body‘s flame.
But who denies me cursed shall be,
And slain, and buried loathsomely,
And slimed upon with shame.”

And darkness fell. And like a sea
Of stumbling deaths we followed, we
Who dared not stay behind.
There all night long beneath a cloud
We rose and fell, we struck and bowed,
We were the ploughman and the ploughed,
Our eyes were red and blind.

And some, they said, had touched her side,
Before she fled us there;
And some had taken her to bride;
And some lain down for her and died;
Who had not touched her hair,
Ran to and fro and cursed and cried
And sought her everywhere.

“Her eyes have feasted on the dead,
And small and shapely is her head,
And dark and small her mouth,” they said,
“And beautiful to kiss;
Her mouth is sinister and red
As blood in moonlight is.”

Then poets forgot their jeweled words
And cut the sky with glittering swords;
And innocent souls turned carrion birds
To perch upon the dead.
Sweet daisy fields were drenched with death,
The air became a charnal breath,
Pale stones were splashed with red.

Green leaves were dappled bright with blood
And fruit trees murdered in the bud;
And when at length the dawn
Came green as twilight from the east,
And all that heaving horror ceased,
Silent was every bird and beast,
And that dark voice was gone.

Until at dusk, from God knows where,
Beneath dark birds that filled the air,
Like one who did not hear or care,
Under a blood-red cloud,
An aged ploughman came alone
And drove his share through flesh and bone,
And turned them under to mould and stone;
All night long he ploughed.