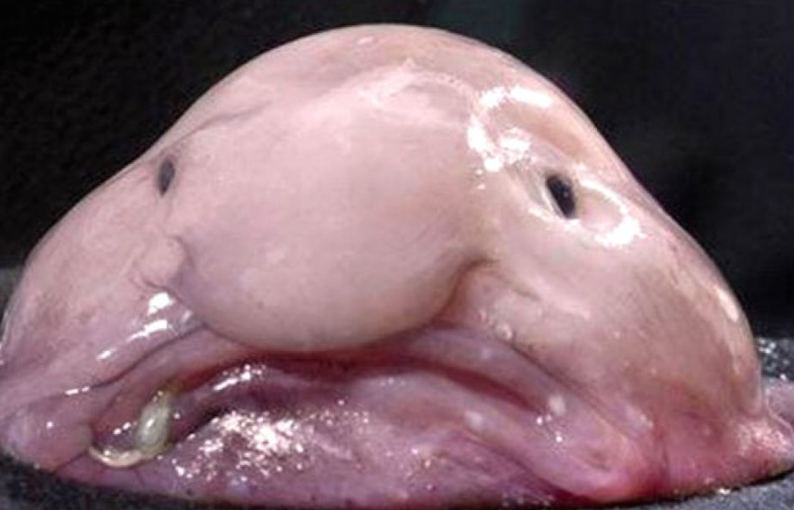 The ugly face of fish.

Scientists Finally Discover The Greatest Mystery Of The Ocean Depths

The classic line from 2001 A Space Odyssey, “My God, it’s full of stars,” resounds with awe and majesty at the mystery of space. It’s often been said that the vast ocean depths are also like space, a last frontier, largely unexplored by human kind, and filled with mystery.

Unfortunately the phrase, “It’s full of poo!” does not resonate with the same sense of wonder.
Fish have been living in the ocean depths for some 450 billion years, eating plants, eating each other, and defecating, defecating, defecating. In a phenomenon scientists have dubbed “ocean snow” the bottom of much of the world’s seas is filled with a slowly swirling sediment of fish poo, estimated in places to be up to 50 meters deep. A murky layer of suspended fish feces deep in the ocean, inhabited by bizarre and sightless bottom feeders. It sounds like a metaphor for politics. No, true fact.That’s deep doo doo, deep down. Essentially fish live in their own toilet.
Recent research by the Spanish National Research Council’s Malaspina Expedition, has found that the biomass of mesopelagic fish, those that swim up to the surface to eat, and then descend to the lower depths to do their dirty business, not only makes up the vast majority of fishy biomass, but is also 10 times greater than previous estimates, a whopping 10,000 billion tonnes.

“The fact that the biomass of mesopelagic fish (and therefore also the total biomass of fishes) is at least 10 times higher than previously thought, has significant implications in the understanding of carbon fluxes in the ocean and the operation of which, so far, we considered ocean deserts.” Stated head researcher on the project, Xabier Irigoien. What once was thought of as ocean desert, poor in essential elements, is now brimming with a rich, fertile and stinky mixture of “carbon fluxes.”

Given that fish can easily pooh their own weight every day, and multiply that by 450 billion years, and that’s awfully deep doo doo. Before you never go in the ocean or walk on a sandy beach again, it should be noted that a large part of fish feces is calcium carbonate, the chemical symbol of which is curiously and coincidentally CaCO3.  Fish constantly drink calcium rich sea water, and to use that water they increase the pH in their intestines, which removes calcium, which is then excreted. Those lovely white beaches at St Tropez or near The Great Barrier Reef? Mysterious atolls and romantic tropical paradises? The White Cliffs of Dover and much of the world’s carbonate rocks? Mostly fish caco.

And as to piscatorial piss, that barely bares contemplation. No wonder the oceans are briny, and fish all have that pursed-mouthed, reluctant to swallow look. Apparently they have known for a long time what humans are only just starting to realize. The terra-formation and bio-formation that are essential to a living planet’s development, seem to be largely processes of swimming through shite.

The most important effects of this toiletification is in maintaining the delicate pH level of the ocean, preventing acidification, and the removal of carbon from the atmosphere, which prevents global warming and the greenhouse effect. Mother nature is of course, beautiful in her complexity, but also, perhaps, a little ickier than you thought. And to swim, so to speak, with the metaphor, if the ocean is like space, and space is like an ocean, inhabited by vast and ugly and unknown fishes, what exulted expellation is it exactly we are swimming through?