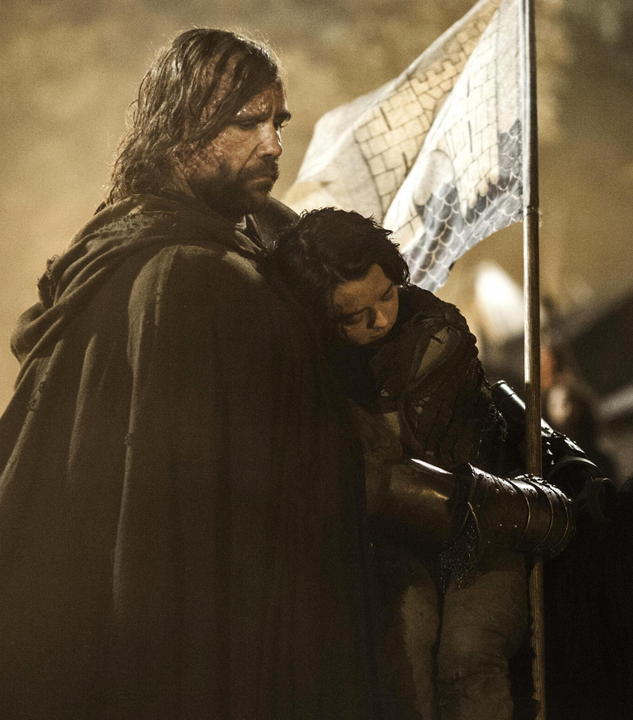 The Hound takes Arya away from the Red Wedding

The moment from the first episode of Game of Thrones Season 4, Two Swords, that everyone is talking about is Arya and the Hound. HBO did wait a couple of days before gloating. I think they were testing the waters before they felt comfortable exulting with us in our triumph. It is not the first scene where Arya kills someone, but it was rather more shocking than previous scenes. We have seen Arya killing a boy to defend herself, or in the last instance, driven by uncontrollable emotion after her mother and brother’s terrible deaths. In this scene we saw Arya, smiling and calm, taunt a man before she drove a sword into his throat.

Some viewers are getting more and more disturbed by Arya as her story progresses. It is true that vengeance may be all that Arya has left at this point. But for those of us who wait for the day when Arya will wreak her destruction upon the Seven Kingdoms, Arya represents what has also become our own thirst for vengeance. This is not to say that Arya has become a heartless monster. Arya is acutely aware of the choices she is making.

“Arya was remembering the stableboy at King’s Landing. After him there’d been that guard whose throat she cut at Harrenhal, and Ser Amory’s men at that holdfast by the lake. She didn’t know if Weese and Chiswyck counted, or the ones who’d died on account of the weasel soup . . . all of a sudden, she felt very sad. ”Arya A Storm of Swords p. 642

Dan and Dave have swapped some elements around as usual, so we saw the Tickler die much earlier in Game of Thrones. In the series the Tickler was killed by Jaqen H’ghar at Harrenhal at  Arya’s request. In A Storm of Swords he is actually with Polliver at the Inn at the Crossroads, and he the victim of Arya’s wrath.

Arya is using the same dialogue the Tickler used when torturing the smallfolk of the Riverlands. When, in the finale of Season 3, Arya set upon some Frey soldiers and attacked one of them I assumed that this was replacing the scene with the Tickler, and I was really disappointed. And somehow relieved when Arya set upon Polliver in the closing scenes of Two Swords.

There are two key points in this scene. Firstly she saves the Hound. She could have in fact escaped and left him to be slaughtered. But the Hound has protected Arya, in his own fashion, up until this point. There is a camaraderie, of sorts, developing between the two. Or perhaps she is just being practical, the Hound is her best form of defence at this point. And then when Arya disarms Polliver, she reminds him of his sins, making sure he recognises her before she kills him. This is a pivotal point in Arya’s journey.

Polliver killed a helpless Lommy Greenhands, an injured child, back in Season Two. It is not as if Arya and Lommy were great friends, he was a burden when he was travelling with Arya, Hot Pie and Gendry. But then it is not as if the smallfolk of the Riverlands should mean much to Arya either. And Arya reminded the Tickler of those people as she killed him. The events at Harrenhal have been altered so greatly from the Song of Ice and Fire version that explaining the differences would require an in-depth article, but the “weasel soup” incident Arya recalls is a result of Arya enlisting the help of Jaqen H’ghar to free some northmen captured by Ser Amory. Not her father’s men, probably not anyone Arya would know personally, but just some northmen. And when Ser Amory is captured after the northmen are freed and take the castle, there is another friend Arya remembers.

“Ser Amory pleaded and sobbed and clung to the legs of his captors, until Rorge pulled him loose, and Shagwell kicked him down into the bear pit.
The bear is all in black, Arya thought. Like Yoren…”Arya A Storm of Swords pg 659

There is something in Arya that has captured the hearts of a lot of fans. A large part of that is easily her courage and her skill. Where her sister Sansa is an unwelcome dose of reality, Arya is like a superhero. Arya is everything we would want to be if trapped in her situation, and Sansa is everything we would not. Arya is our avenging angel. But Arya is not just about vengeance. In a world that depicts the brutal realities of war, the oppression of the lower classes and the subjugation of women, Arya brings us justice.