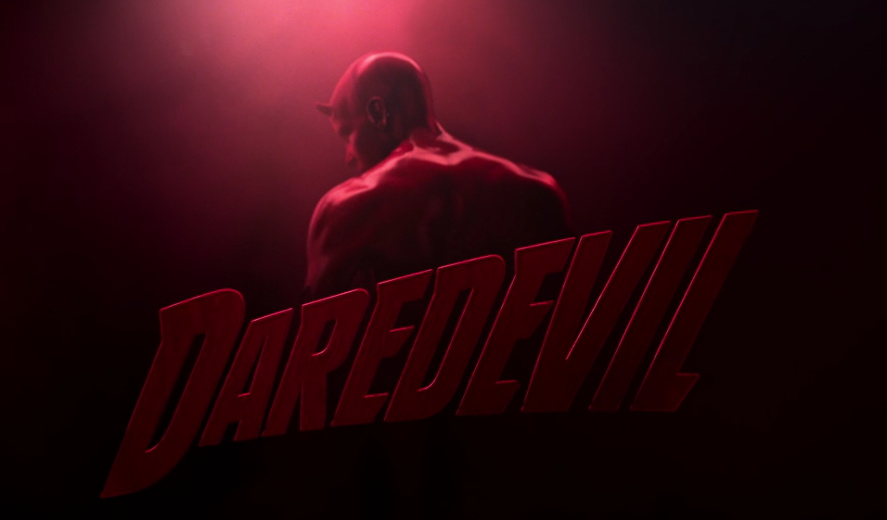 The Nuns Of Discontinuity & Daredevil’s Incredible Nipples Of Doom

Look, I enjoy Marvel’s explorations of the contemporary American idiom as much as anyone. It’s kind of a guilty pleasure, because I generally disapprove of extreme violence and the Military Technological Nexus (that’s like the Military Industrial Complex but rebooted for the modern world). But who doesn’t enjoy seeing the ego-fueled psychopathic fantasies of personal power brought to their inevitable conclusion; in an amoral world, the will to power is the only moral. They appeal to something in the buried juvenile id. A world, a circumstance, where the usual rules no longer apply; where the extreme becomes not only necessary, but justified.
However, even in the midst of such fantasies, a modicum of consistent, internal logic still needs to be adhered to.
Thus our hero, Matt Murdoch, the Daredevil, blind as justice, but with hearing so extraordinary he can still see, kind of the way a bat might, using echolocation that shows him the world in a kind of flowing liquid monochrome.
After miraculously surviving having most of a very large building and an immense amount of water fall on him from a very great height, in the first episode of season three he washes up through the sewer pipes onto the shore of the river. Here’s where logic starts to become problematic. If you are many hundreds of feet down in some deep underground lair or hole where some ancient powerful thing is buried, you are necessarily below the level of the river, and indeed below the level of the sewer pipes that were undoubtedly only built in the 19th or 20th century. Furthermore, water, like sewerage, runs down hill.
For expediency’s sake let’s just imagine he was somehow carried uphill by the sheer pressure of the water, something like a horizontal sewer geyser. He manages with incredible resilience to survive extreme battery, drowning, infection, sewer crocodiles, not being robbed when found helpless on the street in New York, and gets to the orphanage where he grew up. His wounds are treated and bandaged by the same tough but kindly nuns who taught him his Catechism as a child.
We see from Matt’s point of view the hazy figures of the nuns, the priest, coming in and out of focus, as they patch him up and decide what to do. Matt’s lost his hearing in one ear, his echolocation isn’t working. Now a point of view shot is where we see from the character’s eyes. I’m sure you can see where I’m going with this, though apparently the director of the episode didn’t. If Matt only sees in a weird liquid monochrome soundscape, and now he is partially deafened so that isn’t working, how the hell can wee see from his point of view hazy but normal figures coming in to focus?
Continuity. It’s one of the basic things which helps maintain the suspension of disbelief in the filmed world. So you make sure Charlton Heston isn’t wearing a modern day watch in the chariot race scene in Ben Hur, you make sure the actor’s shirt doesn’t change from red to blue in the next scene, that he has a bandage on the same arm, a flower behind the same ear, and so on, because though it might be filmed days or weeks apart, in the film’s timeline the following scene may be the very next moment, and if that moment is fractured, even for an instant, the world loses any plausibility, and indeed, falls in to parody.
So our hero, now no longer blind as a bat, is lying in bed in the orphanage, freshly bandaged, with nipples just peeking out the edge of the bandage. Not exactly sure why the nuns decided on the half nip, I guess they’re only human? The chief nun is Joanne Whalley after all (hey wasn’t she married to another bat?) so imagine her some twenty years previously when Daredevil was just a junior devil, and she would have been something of a religious experience to a young teenage orphan. There would have been all sorts of weird Catholic stuff going on there, no doubt. Of course, this is not to suggest the former Joanne Whalley Kilmer doesn’t make a very attractive older nun, I certainly don’t want to sound ageist, or indeed, nunist, here.
Daredevil, realizing he is even more blind than previously, and surrounded by unaccountably attractive nuns, panics and falls to the floor, where he is cradled in what can only be described as the Messianic position by the erstwhile object of devotion, Mrs Batman. As one might suspect in such a moment, the nipple is now fully free. We will allow this could have happened when he was clumsily stumbling about, which would also indicate fairly inept bandaging skills from the good sisters of Immaculate Discontinuity.
In the very next scene (and we are not given any reason to suspect any significant time has passed) our hero is back in bed, fully bandaged again, and the priest (I can’t remember his name, I’ll just call him Father Damien) is offering some world weary, avuncular advice. I’m not exactly sure who is being protected from who in this scene, but everything seems quite safely covered up. In the very next shot, the bandages are half way down the chest, both nipples on high-beam as if in some kind of highly disturbing post-coital moment. I’m so glad he doesn’t smoke. I’m beginning to suspect, though blind and unable to hear, Daredevil is actually learning how to perceive with his nipples, like a modern day Helen Keller.
He roles over, back to Father Damien, consumed by weird, guilty, shadow.
Still better than DC.
I made a comic. 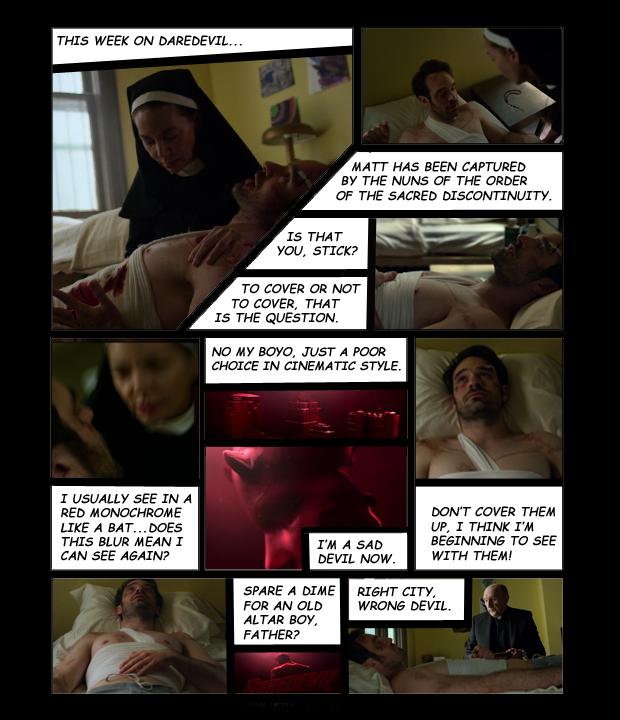