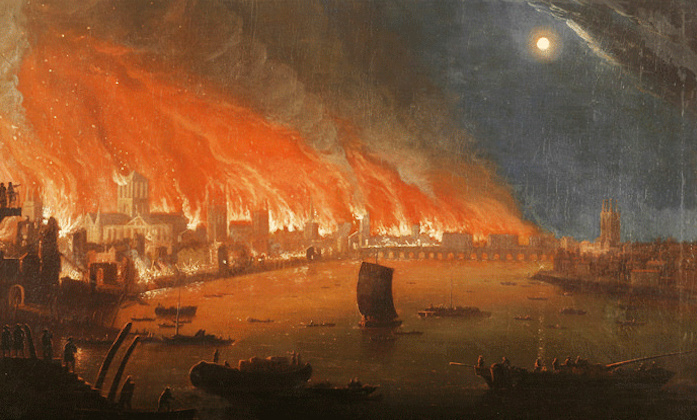 History records that the Great Fire Of London began in the early hours of the 2nd of September, 1666, in the Bakehouse of Thomas Farrinor in Pudding Lane. A dry summer and an exceeding cold autumn saw the Thames frozen over, and while Londoners celebrated the prodigy with revels and impromptu frost fairs – festivities held on the surface of the river – the crowded city of narrow lanes and wooden buildings with walls and shingle rooves painted in tar as waterproofing was a disaster in the making.

It was an age of wonders and terrors. Winter seemed to grip the world. A great comet had filled the sky two years previously. There were reports of another such mystery in the distant east. Plague ravaged. Conflict between Protestant and Catholic simmered in England, flared into rebellion, warfare and massacre in Europe. Fear of devils and witches saw trials and hangings in Old World and New.

The Pudding Lane fire borne by a strong wind spread to the stables of nearby inns, finding fuel in hay and horse feed, sparks lit the Church Of St Margaret, then to the riverside warehouses of Thames Street, where stores of flax, timber, tallow, coal, oil and spirits fed the conflagration. The citizen bucket crews had no effect, even the bands of trained firefighters who would use gunpowder to demolish buildings, creating firebreaks to halt the spread, failed. Indeed, in the dry, windy conditions, their efforts seemed to clear a path for the flame, to encourage it.

Three quarters of the city, over 400 acres, 13,000 homes and businesses, 89 churches, 52 Guild Halls and public buildings were destroyed. While much of the population were homeless and financially ruined by a seeming miracle, only 16 people lost their lives in the almost week long firestorm.While immensely destructive, yet out of the purge came renewal. The plague ended. The infestations of rats and fleas that bore the disease destroyed. Charles II instituted a commission to rebuild the city, with wide streets and buildings of brick. By 1671, 5 short years after the fire,  some 9000 homes had been completed. Sir Christopher Wren oversaw the design and rebuilding of churches, great and small, the grand dome of St Paul’s Cathedral becoming a landmark and a new kind of wonder for a new age. An age no longer defined by superstition and mystery, but by geometry and mathematics, architecture and investigation, discovery and science, and the aspirations and creations of man.
The narrow, crooked London, filled with smoke and stink, and superstition, is a place lost to history. Until a team of programmers and animators from De Montfort University reconstructed the cobbled streets and leaning beam-and-plaster inns and dwellings of London before the Great Fire. Their efforts won the Off The Map competition in 2013. Using old maps and descriptions in diaries and journals from the British Library, and the Crytek 3D programming environment, the 3D animations they created take you on a flying tour of a long lost, historical London.While it does look a little like a CGI video game, the flickering flames, the smoke filled atmosphere, the history behind the animation imbues it with a quiet sense of eeriness. As we sweep through an empty London, a deserted Pudding Lane, our witch’s eye view, one can almost imagine a stray spark, a growing flame, panic spreading through the streets. Or perhaps the vengeful witch, flying through the streets while the good folk of London sleep, is the one holding the torch?