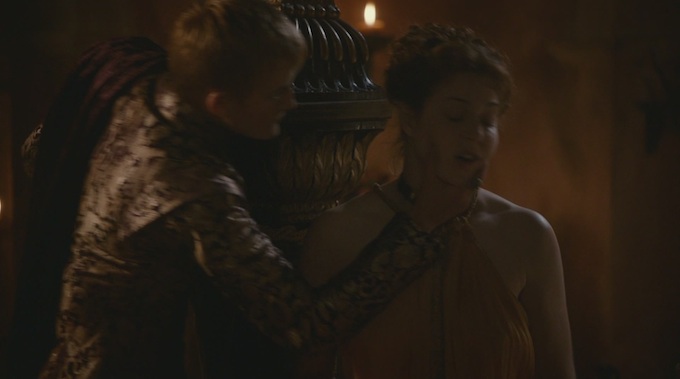 When we first encounter Joffrey Baratheon (or should that be Lannister?) when the royal party attends the feast at Winterfell, he seems little more than an arrogant princeling. Grown up amidst the splendor and privilege of King’s Landing, heir to the throne, indulged by his mother, ignored by his fathers, we can perhaps forgive him his arrogance. Lord Eddard Stark for the most part ignores him. Jon Snow observes Joffrey enter the Great Hall of Winterfell on his half-sister Sansa’s arm. Sansa already seems besotted. Jon, as boys (and men and seemingly especially knights) are want to measure themselves, is dismayed that at twelve the golden youth is both younger and taller than he and Robb. Joffrey was twelve, he, had his sister’s hair and his mother’s deep green eyes. A thick tangle of blonde curls dripped down his golden choker and high velvet collar. Sansa looked radiant as she walked beside him, but Jon did not like Joffrey’s pouty lips or the bored, disdainful way he looked at Winterfell’s Great Hall. (A Game Of Thrones, p.99) 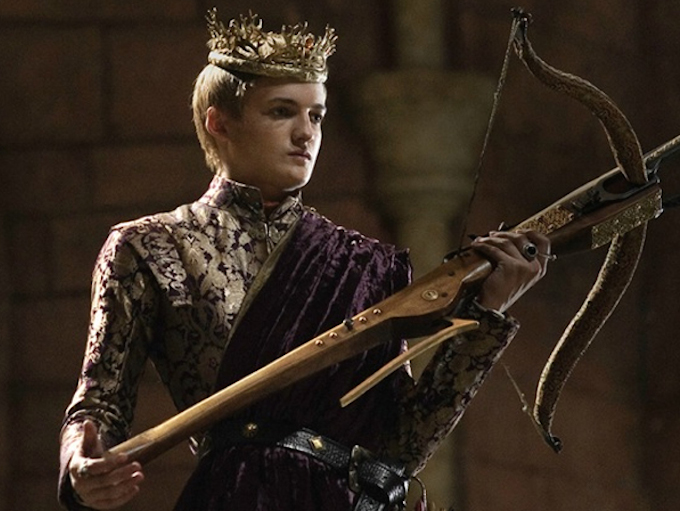 Tall, golden, handsome, gallant. Sansa is immediately charmed; to her Joffrey is everything a prince should be. At Winterfell Joffrey demonstrates perhaps the normal hauteur of a sophisticated prince, attendant in what must have seemed a bleak rural backwater. Even though Jon Snow, observing Joffrey’s clashes with Robb in the practice yard, told Arya “Joffrey truly is a little shit.” (A Game Of Thrones, p.139) again, his behaviour could still be seen as no more than arrogance, the braggadocio of youth. Sansa with her romantic dreams of knightly chivalry, fails to see any fault. Sansa did not really know Joffrey yet, but she was already in love with him. He was all she ever dreamt her prince should be, tall and handsome and strong, with hair like gold. (A Game Of Thrones, p.253) A blindness that isn’t dispelled until the moment Joffrey orders her father’s head cut off.

In HBO’s TV series A Game Of Thrones Joffrey from the outset is shown as arrogant, spoilt, cruel, a coward, a weakling. At times he is even presented as a comic figure. In the real Game Of Thrones, the Joffrey of George R R Martin’s book series, A Song Of Ice And Fire is a more subtle and more insidious creature.

Not until Bran lay broken and unconscious, having been pushed from the window of a tower by Jaime Lannister, do we begin to see Joffrey’s true nature. Bran’s wolf, Summer, has been howling all night. Joffrey complains to Sandor Clegane, who offers to find it and kill it. Joffrey seems delighted by the idea. His attitude is no mere selfish indifference. Tyrion encounters Joffrey and Clegane, and demands that Joffrey call on the Starks, to offer his sympathies.

Joffrey looked as petulant as only a boy prince can look. “What good will my comfort do them?” “None,” Tyrion said. “Yet it is expected of you. Your absence has been noted.” “The Stark boy is nothing to me,” Joffrey said: “I cannot abide the wailing of women.” Tyrion Lannister reached up and slapped his nephew hard across the face. the boy’s cheek began to redden. “One word,” Tyrion said, “and I will hit you again.” “I’m going to tell Mother!” Joffrey exclaimed. (A Game Of Thrones, p.164)

Lack of empathy is, as studies from psychologists in the field such as the University of Chicago’s Dr. Jean Decety, demonstrate, a common trait shared by psychopaths. Joffrey’s lack of empathy, his lack of the capacity to feel and understand the emotions of others, combined with his apparent sadistic glee at the thought of the death of an animal, are two markers that would send up red flags at the FBI’s Behavioural Science Unit. While psychopaths and sociopaths do not feel empathy for others, in our society in order for them to function, they generally develop the ability to mimic empathy, indeed they can be so effective at the pretense they can be quite charming.

When Sansa is frightened by the King’s headsman, Illyn Payne, and Sandor Clegane’s horribly burnt face, Joffrey comes to her rescue. And her prince was there. “Leave her alone,” Joffrey said. He stood over her, beautiful in blue wool and black leather, his golden curls shining in the sun like a crown. He gave her his hand, drew her to her feet. “What is it, sweet lady? Why are you afraid? No one will hurt you. Put away your swords, all of you. The wolf is her little pet, that’s all.” He looked at Sandor Clegane. “And you, dog, away with you, you’re scaring my betrothed.” (A game Of Thrones, p.264)

Not everyone who shows psychopathic tendencies becomes a serial killer. Harold Lasswell, one of the pioneers in behavioral studies, published his first theory on aberrant psychological attributes in business and political leaders in 1948. There are some that would argue that some psychopathic tendencies, focus and ruthless self-interest, are an asset in business and political leadership.

In the case of absolute monarchy, such traits, unfettered by even the need to mimic sympathy, perhaps lead to the kind of megalomania displayed by the God Kings of ancient Egypt, or the military generals who ruled as Caesars in ancient Rome, or the English Kings in the middle ages, who assumed that their personage and their right to rule derived from the Divine, and therefore that their behaviour, no matter how grasping, vengeful or petty, was also infallible. The rules of these kings were at least often tempered by social and religious strictures. Joffrey has neither the interest nor the wit to wield real political power. He is a puppet figurehead, overruled by his mother, his uncle, his grandfather. The only power restricting Joffrey’s social behaviour, other than his own stupidity, are the demands of his manipulative but indulgent mother. Without responsibility, as a king he is both emasculated and given free reign. His cruelty toward Sansa, his disrespect of his mother, indicate a sadistic misogyny. Joffrey’s younger siblings Myrcella and Tommen are both apparently sweet, gentle children. Joffrey was undoubtedly aware of the conflict in Robert and Cersei’s marriage, and he seems to have inherited Robert’s dismissiveness and casual cruelty toward his wife. But perhaps on another level he is aware of his true parentage.
His sadistic urges escalate from cruelty toward animals, the infamous incident Stannis recounts (and that previously Cersei dismissed as mere ‘mischief’),  “Joffrey…I remember once, this kitchen cat…the cooks were want to feed her scraps and fish heads. One told the boy that she had kittens in her belly, thinking he might want one. Joffrey opened up the poor thing with a dagger to see if it were true.” (A Storm Of Swords, p.1214).

In the TV series, it seems even clearer that he is emasculated and gains sexual gratification through sadism and stabbing. In the fourth episode of series two, Garden Of Bones, when his Uncle Tyrion sends him two prostitutes in a misguided attempt to appease Joffrey, he forces Ros to beat Daisy bloody, and has Daisy’s body dumped in Tyrion’s room. In season three, episode six, The Climb, Joffrey uses his fancy Myrish crossbow to brutally murder Ros, tied suspended from his bed, impaled on numerous bolts. This is clearly piquerism. The urge to stab, to penetrate someone with a weapon, a knife, sword, bolt or arrow, and results when a sadistic sexual urge meets physical dysfunction or inadequacy. Again it is a trait displayed by certain serial killers, Jack The Ripper being perhaps the most infamous example, and it is easy to imagine such an abberration deriving from a violent father, a controlling, overly sexual mother, and the unconscious knowledge of the breaking of a sexual taboo.

In the books Joffrey’s sick perversity is never expressed as explicitly, and yet in many ways his behaviour is more unforgivable. In HBO’s Game Of Thrones we see a culture of misogyny, exploitation, and widespread cruelty, a dog eat dog world in which such excesses, while extreme, are somehow part and parcel of the rights of kings in an exotic and barbaric culture. In the real Game Of Thrones it is clear that norms of behaviour have unravelled amid the chaos of war. Westeros is usually a civilized nation, ruled under laws of chivalry, church and justice. Joffrey’s actions, such as shooting cats for sport with his crossbow, shooting peasants begging for bread at the gates of the Red Keep, having his knights strip and beat Sansa, punishment for Robb’s victories in the war, “Leave her face,” Joffrey commanded. “I like her pretty.” (A Clash Of Kings, p.647) are barbaric crimes. When Tyrion intervenes, and stops the beating going any further, he reminds Joffrey of what happened to the Mad King, Aerys Targaryen.

Even at her wedding to Tyrion, when Sansa thinks she is finally free of one monster, but perceives herself falling under the power of another, Joffrey invokes something akin to the droit de seigneur, the right of a lord or king to have sex with subordinate women, “A king can have other women. Whores. My father did. One of the Aegons did too. The third one, or the fourth. He had lots of whores and lots of bastards.” As they whirled to the music, Joff gave her a moist kiss. “My uncle will bring you to my bed whenever I command it.” (A Storm Of Swords, p.560)

The ideal of Kingship is one of stewardship, of noblesse oblige, the idea that nobility involves not only entitlements, but responsibilities, rule with a benign and just wisdom, derived from codes of justice and fair behaviour. In Robin Hobb’s Farseer Trilogy (a series that George R R Martin highly recommends) – the Kings of the Mountain Kingdom go further, they refer to themselves as the ‘sacrifice’ of the people.

His Grace, Joffrey of Houses Baratheon and Lannister, First (and hopefully last) of His Name, King of the Andals and the First Men, Lord of the Seven Kingdoms, and Protector of the Realm is of course more want to sacrifice his people, than be sacrifice for them. He is loathsome, cruel, weak, cowardly, stupid but cunning, and one of the most despicable characters you will encounter in recent literature. The power he has he uses purely for selfishness, whim, indulgence, cruelty, and pettiness with the sadistic tendencies of a serial killer. Given free reign, he would undoubtedly end up a tyrant like the Mad King Aerys, like a Caligula. What he lacks, most of all, is nobility, a just and fair minded use of power. We have a tendency to psychoanalyze, to find the root of the TV series’ version of Joffrey’s behaviour according to our own values, to find some excuse in his upbringing and parentage. The superstitious citizens of Westeros, however, may surmise that it is his unfortunate parentage that has cursed him, that has made him evil. Yes, he inspires hatred in readers and viewers. Perhaps, one of the things we don’t see about Joffrey in the HBO TV series, that is most telling of his character in the real Game Of Thrones, is his beauty. Tall, strong, handsome, green eyed and golden haired.

When Sansa rode with him along the Trident, travelling to King’s Landing for the first time, it was a glorious day, a magical day. They stopped at a holdfast along the river, and dined on fresh trout, and Sansa drank more wine than she ever had before. They went more slowly after they had eaten. Joffrey sang for her as they rode, his voice high, sweet and pure. (A Game Of Thrones, p.270) Joffrey, like many of George R R Martin’s characters, is a chiaroscuro – a contrast of extremes. And in many ways, and above all else, he is his mother’s son.