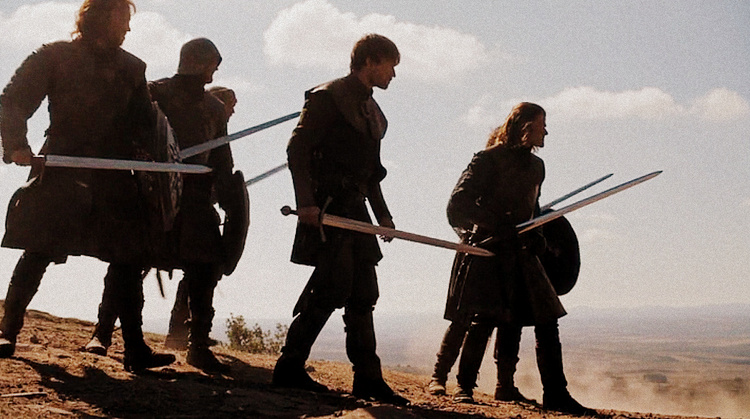 Game of Thrones Season 6: Cersei and Ned Mythology vs. Mythology

The Game of Thrones producers have long pushed a subtle ideology, one that has persisted from the very first season and shows no signs of waning in season 6. The ‘sacredness’ of motherhood trumps all in Game of Thrones. Many fans accuse Dan and Dave of having a fan-boy adoration of Cersei Lannister, and this is evident. It is not exclusive to Cersei, Catelyn Stark is another character who has been softened, both by altering her last words to a teenage Jon Snow leaving for the wall, and inventing a story where Catelyn stayed up with Jon all night when he was sick. Cersei’s abortion of the only child she conceived with Robert Baratheon was changed to Cersei losing her live infant son, who had Robert’s dark hair, to an illness. Typically fans will find it difficult to sympathise with mothers who abort the child of their legal husband because they prefer to conceive in an incestuous relationship with their brother; or invest in the stepmother who tells her stepchild she wishes he lay dying instead of her own son, after a lifetime of abuse and neglect. Ellaria Sand’s daughter is now shown or mentioned at all while Ellaria schemed and plotted her way around Dorne, better to let fans forget that Ellaria is a mother at all. Because according to the Game of Thrones producers, women who have given birth are sacred, and infinitely more complex than beings who have not.

Now that Catelyn has been out of the picture for some time, all the strength of motherhood has been channelled into Cersei. It is clear the producers worship her character, and it colours their writing to an extent that they have to sacrifice other characters to maintain the fan-fictional Mater Dolorosa. One of Cersei’s first enemies on the show was Ned Stark.  And because the producers are not really capable of employing subtlety (because it can actually be done for the screen too folks), they continue to persecute the Starks. Not only has Sansa gone through a completely nonsensical story arc, she has been sexually abused by Ramsay Bolton. Now Rickon Stark is back it is unlikely he will make it to the end of the season, and another direwolf as been beheaded. But the producers even persecute the Starks posthumously. The real agenda the producers were pushing this week was destroying the ‘mythology’ of Ned Stark. 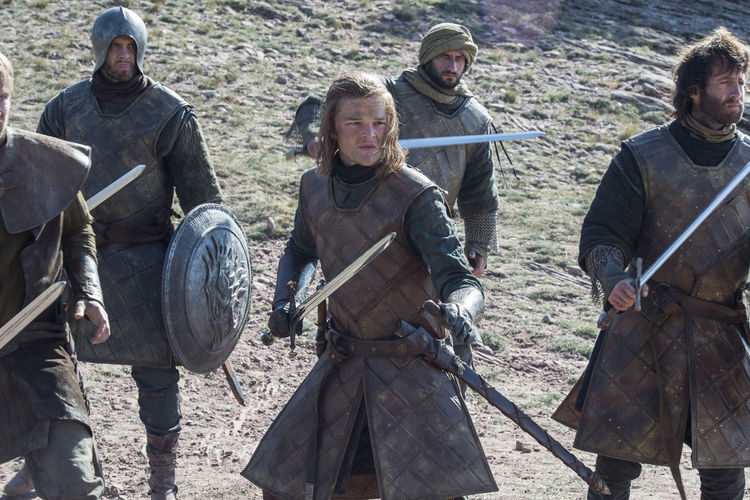 This is a transcript of this week’s Behind the Episode video segment on The Tower of Joy scene.

David Benioff:Every kid that grew up in Westeros, they all hear about this legendary sword fight that took place twenty years ago, and, as far as Bran knew, it is just his father beat this legendary guy. Honour is a kind of wished-for state amongst certain members of the society who want to be the best possible version of themselves, they want to live and die bravely, and fighting[…]according to certain code. And certainly Ned embodied that better than anyone, I think, we’ve seen on the show. One thing to remember about this fight is that this is at the end of a long rebellion, in which Ned and Howland have seen many thousands of people die, due to the insanity of the Mad King, who these KingsGuard are sworn to follow

Dan Weiss: So honour was so important to Ned Stark that it was worth losing his own life for, but he was completely ready to let go of that honour and excellence to do something that he really felt was more important[…]that could make a very, very strong defence for Ned doing what he did, but it certainly does puncture the mythology of Ned Stark that’s running through this world, especially after his death.

We can assume that when Benioff is referring to “honour” he is trying to say something about the code of chivalry, clearly without understanding it very well, as it was far more complex than wanting to be ‘good’ and it operated on many disparate levels, from poetry and romance to ransoming prisoners of war. And it was, of course, flawed, just as humans are flawed. Weiss’s comments on the so-called puncturing of the Ned Stark mythology take the Stark persecution to a whole new level. Firstly, viewers who are unaware of the canon will not realise why Ned stormed the Tower of Joy, or who is in the tower. Benioff tried to touch on Ned’s reasoning by way of saying there was a war and the Mad King has killed many people, but Ned was not there for vengeance. Ned was there to rescue his sister, who had been abducted and raped by Rhaegar Targaryen. When Ned was battling the Sword of the Morning he was trying to save his sister’s life.

Firstly, to make the comments about Ned’s honour being impugned is nonsensical, because it was not even Ned who knifed Dayne in the back of the neck. In this version of the Tower of Joy scene, as we cannot be sure what will unfold in the books, it was Howland Reed. It was no more than Dayne deserved, he, along with Ser Oswell Whent, helped abduct the sixteen year-old Lyanna Stark. When Lord Rickard and Brandon Stark went to the city to try and secure Lyanna’s return they were murdered horribly by Aerys. It was Rhaegar’s selfish actions and rape of Lyanna that triggered Robert’s rebellion. Dayne not only helped abduct her, he was helping keep Lyanna imprisoned. Howland Reed had been befriended by Lyanna, who rescued him from bullying squires and treated him as her equal, and had every reason to knife Dayne from behind. There was no honour in Dayne, and he didn’t deserve an honourable death. Ned, as we can see below, was stunned when Howland did the deed. 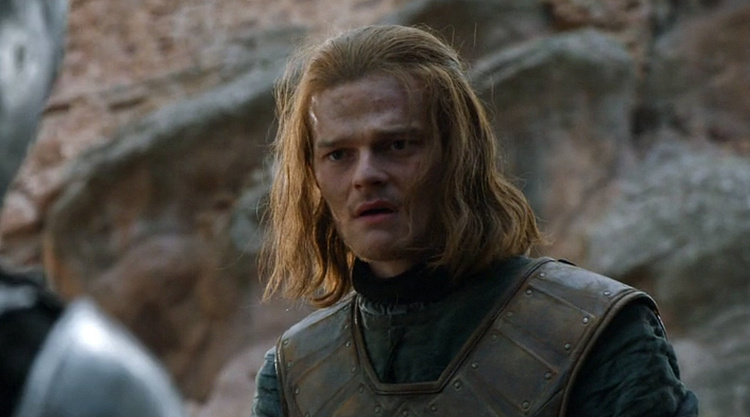 Then Ned, after recovering his wits, gave Dayne a quick death, rather than leaving him to bleed out. Again, it was more than he deserved. In fact this scene showed Ned doing what he always does, behaving honourably because it is just instinctual. Not because he is trying to be something better than he is. If he was trying to be better than he was he would never have attacked the Kingsguard who were ‘only’ following orders, or rebelled against his king.

We all know what stigma follows Jaime Lannister, Kingslayer, even though he murdered Aerys because the Mad King was planning to torch the city, and asked Jaime to bring him Tywin Lannister’s head. Jaime did the right thing. But the code of honour doesn’t allow for his so-called crime to be forgotten. Even if Jaime, like Ned, takes the code of protecting the innocent seriously. Jaime executed one of the Mountain’s men for raping Pia, a girl that had been raped hundreds of times by the men of Harrenhal. Jaime took the girl under his protection, even if the girl had been abused hundreds of times before. Any further abuse would be punished. So should Ned waste time by appealing to a madman and his selfish rapist son? Where did that get Lord Rickard and Brandon? The fact is men did not challenge each other and fight elegant duels in the middle of a war, and family will usually put family before all else. Ned did the right thing.

But it is no accident at all that this episode was chosen to “challenge” Ned’s honour, especially when the High Sparrow himself took to praising Cersei’s mothering skills as divine.

How do you think the Mother Above first came to us? How did men and women first come to feel the Mother’s presence, hmm? It was through their own mothers. There’s a great deal of falsehood in Cersei. You know that. But when she speaks of you, the Mother’s love outshines it all. Her love for you is more real than anything else in this world because it doesn’t come from this world. But you know that. You’ve felt it. You’ve seen her when she talks to you.

Cersei Lannister has once again been established as being good underneath it all, while Ned Stark’s actual goodness is challenged, once again. The problem is the producers have become so self-indulgent with Cersei that she doesn’t resemble the actual Cersei Lannister she is based on. A woman who during her childhood began a sexual relationship with her twin brother and murdered her best friend. Who aborted a child for the crime of being legitimate and made certain all of her children were then conceived in her incestuous and adulterous relationship. Cersei didn’t notice Joffrey’s psychotic tendencies, but Robert did. Tommen is, in actuality, eight years-old, bullied by Cersei and used as an instrument for her to wield power. Cersei is not actually the clever woman whose true talents are oppressed by the patriarchal society she lives in, or whatever the producers would like you to believe. Cersei is self-centred, arrogant and stupid to boot.

So week after week we endure Cersei sweeping around, looking smug, promising vengeance for one thing or another, harping on about being a Lannister. The producers push Saint Cersei too far. Suggesting her love for Tommen has its roots in divinity is laughable. Giving birth does not make you a saint. Cersei has never had an honourable instinct in her life. Her first instinct is always to protect herself first, then her brother and children. Ned Stark was not a perfect father, not even close. But the battle between House Lannister and House Stark’s honour? Ned Stark’s honour has not been damaged by this fresh attempt, the fact that he faced the Kingsgaurd and challenged them face to face only strengthens the image of Ned’s honour. House Stark will always win that battle. 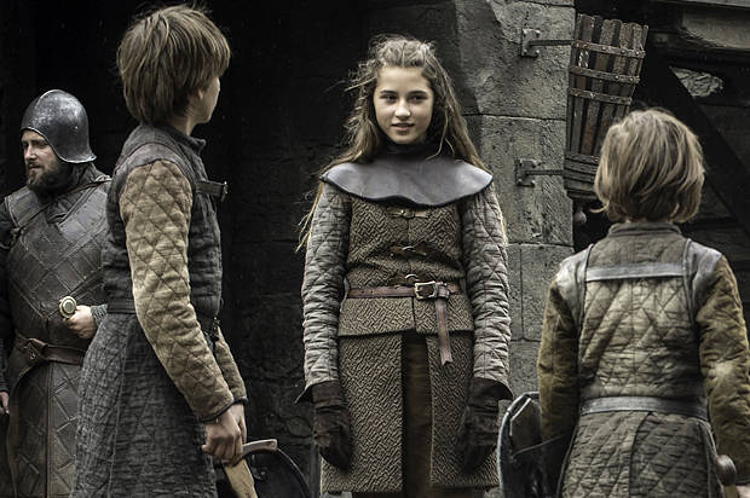 Portrait of Lyanna Stark by Enife at Deviant Art