Game of Thrones Season 6: Daggers vs. Canon Part I

There is something very odd about watching a favourite character being murdered on-screen and not feeling any outrage, only a little perplexity, or (it has to be admitted) scorn, especially when I see a Game of Thrones version of a Sand Snake. Watching Ellaria Sand sink a dagger into Doran Martell’s chest only made me scratch my head and wonder if that was a neat way of removing the badly-received Martell story-arc from Game of Thrones. As we have learned the ‘extra’ season past the initially proposed Season 7 finish is only another ten or fifteen hours of footage – so it really just Season 7 split into two with a possible few extra episodes. What was interesting was the comment from the showrunners that “book readers won’t be spoiled by what’s to come on the show”. We can now assume that this is because they are now diverging so greatly from the source material that the book and series story lines will be completely dissimilar. So while Dan and Dave go plunging their daggers through carefully constructed Song of Ice and Fire story arcs and the chests of major characters, and George labours and labours away, now we can wonder if stories from the show will appear in the books, rather than stories from the books appearing in the show. Here’s a handful of curious stories from the opening episodes of season six, The Red Woman and Home. 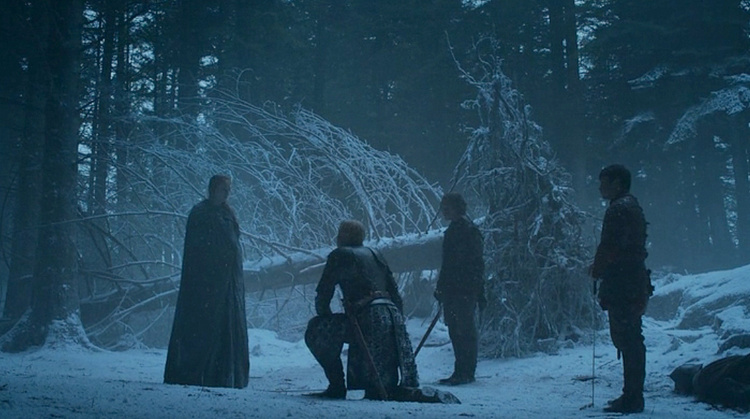 There was actually a lot about this scene that was really lovely, but it really was a clichéd fairytale ending for a series that loves their “no one is safe” gimmick, and George never would have done it. So despite me thinking “Brienne will come and save them now” when I was watching, I was still actually a little surprised to see her swoop in and save the day. Sansa’s story has, of course, strayed completely from the canon. They’ve dropped her into the relatively unimportant Jeyne Poole’s story arc and Baelish is nowhere to be seen – whereas in the books she is still in the Vale with him. In this scene there’s a hint of greatness in Sansa’s poise as she stumbles sweetly through her speech formally accepting Brienne’s service. It gives us another glimpse of her future. However Art Parkinson and Natalia Tena, who play Rickon Stark and his protector Osha, were spotted in Belfast last year so it is unlikely Sansa will be going back to Winterfell to claim it as her own. But perhaps for a reunion with Rickon, now heir to the North, who Wyman Manderly calls his “liege lord”? It’s still a long way back from the Wall.

On another note, we still haven’t seen the aftermath of Brienne’s attack on Stannis. Is he being reserved for a possible emergency resurrection? 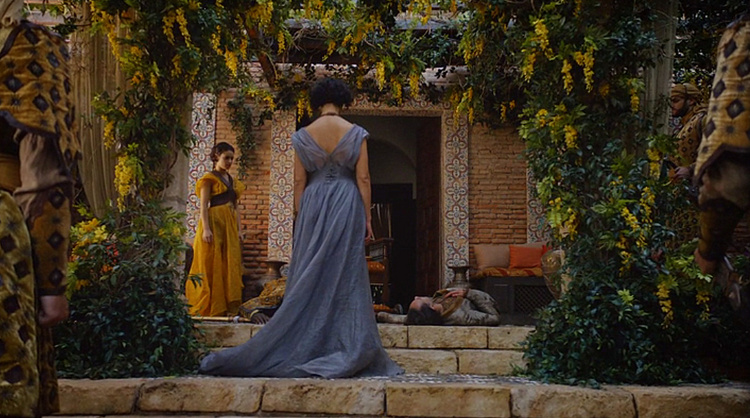 There were just so many things wrong with the series adaptation of Dorne that I am hoping this was a somewhat merciful end to a terrible, terrible story arc. The Game of Thrones depiction of Ellaria, which is absolutely nothing like the gentle and gracious woman we know from the books, still infuriates me. She is a cartoonish, stereotypical sock puppet, and while I am sure the crew thought her triumphant “Weak men will never rule Dorne again” line was some great feminist blow against the patriarchy, Ellaria and the Sand Snakes have been some of the most horribly sexist characters written for the show to date. Don’t be fooled. If you want to see a truly strong and intelligent woman read Ellaria’s speech from A Dance with Dragons. Let’s hope this is the last we see of them.

(Later I missed the Sand Snakes murdering Trystane because I started playing Farm Heroes Saga when they came on screen). 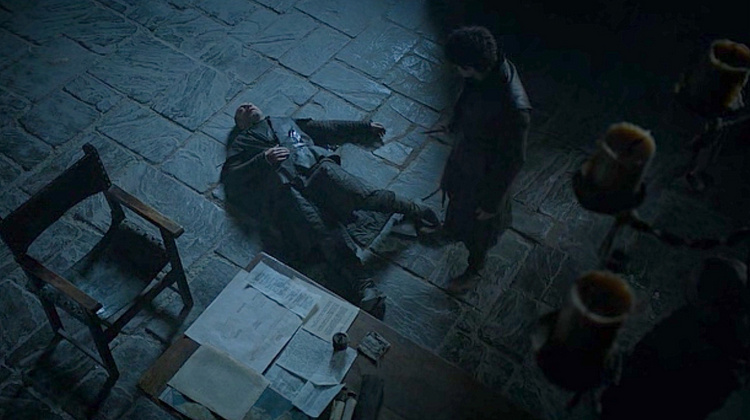 The scene with Ramsay murdering Roose Bolton was very odd indeed. Ramsay is not only illegitimate but his vicious character is well-known and not at all well-liked. Roose is not particularly well-liked in the North either but to intimate that Ramsay would have enough sway to murder Roose, his wife Walda and their newborn son without anyone batting an eyelid is stretching believability. Walda is a Frey after all, and the Freys will want revenge. Plonking an unflappable Karstark who is inexplicably loyal to Ramsay into the mix doesn’t help matters. Also no Maester would have handed Walda over to Ramsay, he would have run straight out the back gates with her. The show doesn’t help matters by always surrounding Ramsay with random oafish thugs who support his every move, as if all of the Boltons and their men are like Ramsay. That is not the case at all. Even Ramsay’s own men, his “Bastard’s Boys”, report to Roose.

In the broader scheme of things this is not a great move. However Roose did forbid Ramsay from attacking the Wall earlier in the scene, so this will give him the freedom to do as he will.

Harington Hair Watch is Officially Over 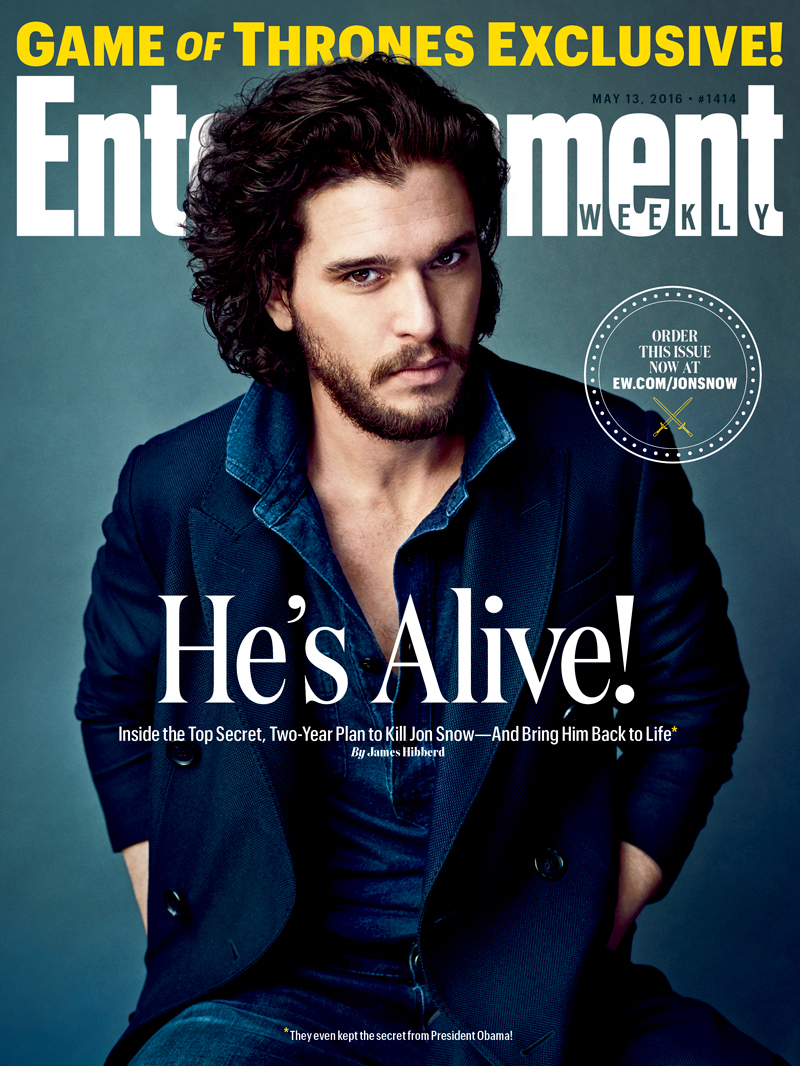 I’ll tell you what, EW certainly isn’t worried about keeping it spoiler-free for a few more weeks. Kit has charmingly apologised for lying to fans. The scene itself  was rather drawn out, and expected, but I thought it was nicely done, and there was either a tiny hint or red herring when Ghost raised his head before the air came back into Jon’s lungs. I am still undecided about whether or not Jon actually dies in the books. But if he does I think it will be a very different story arc. At the moment Melisandre and Davos’s unholy alliance is sitting rather strangely, there is no real explanation of why Davos has not only forgiven her for burning Shireen, but is helping her get her faith back to save Jon, who is now his beacon of hope. Or does Davos not know what happened in the North? Is Stannis even dead? These storylines may be being put away for next season.