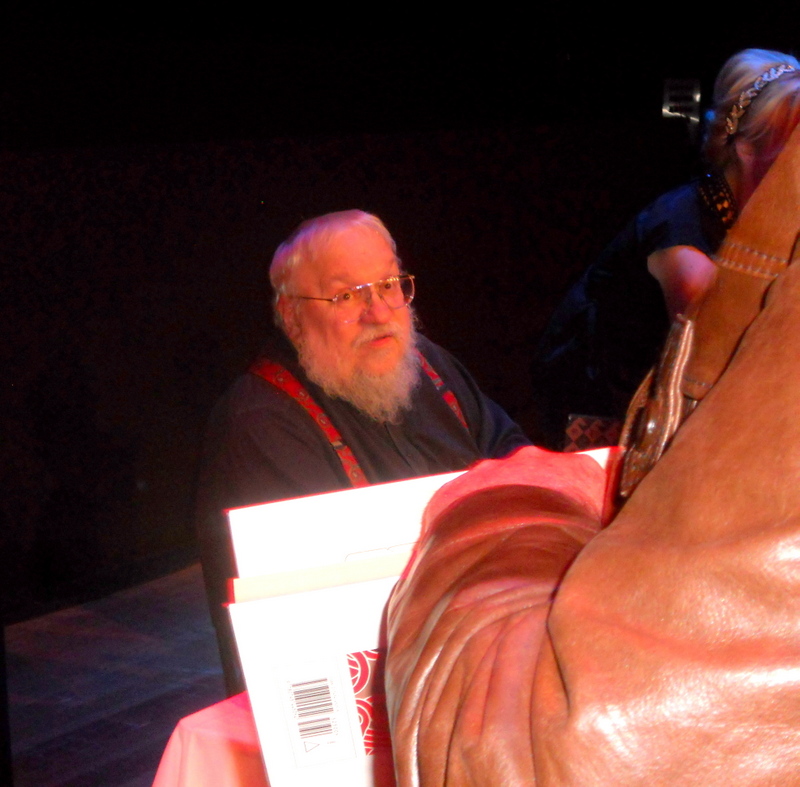 We had a ball at the Wheeler Centre’s Game of Thrones – In Conversation event with George R.R. Martin and Michelle Fairley. The evening began with a short preview for series four, which was agonisingly brief, but still awesome. The Wheeler Centre’s Dan Debuff, who seemed to be a proper fan and fellow nerd,  hosted the evening which consisted of a separate interview with Michelle Fairley, George and then a good Q&A session with the two of them.

It was nice seeing Michelle out of her serious Catelyn Stark character, and she kept everyone entertained for her 30 minute interview, where she discussed the show and her character, and how much she loved working with Richard Madden (who played her son Robb Stark). When Dan asked her if she would have done things differently from Catelyn, she said that in retrospect it was easy to see where Catelyn had gone wrong, but she had been misled by Littlefinger who she had known for years and trusted. She also discussed Robb’s character having to be allowed to make mistakes, filming the Red Wedding, and how she found out on the first day what would happen to her character in Season Three. She really is such a fine actress with such a great understanding of the character and it was awesome seeing her and meeting her. 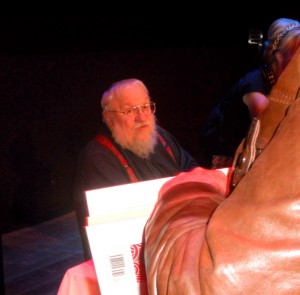 George primarily discussed his books and writing, which was nice, and discussed Tolkien again, who is such a huge influence on him, when Dan asked him about his tendency to kill of main characters. George talked about how killing off a main character means that you “mean business” and what Tolkien had done with Boromir and Gandalf’s deaths was staggering, although he did say if it was him Gandalf would have stayed dead. It’s fun to imagine a thirteen year-old George having to wait a year until The Return of the King was released to find out what would happen after he was convinced Frodo was dead. He also talked about how so many fantasy books in the 80’s and 90’s had very little grasp of medieval life and basically depicted it all wrong. He talked about how the clichéd plucky squire giving cheek to the beautiful princess and her falling in love with him would never happen, because the plucky squire probably would have had his tongue removed for cheeking her. It’s interesting because although the books are high fantasy and set in an entirely imaginary world George still depicts it as a true medieval society.

My favourite part of the evening was George talking about his female characters, and how he wished he had spent some more time depicting Catelyn with her daughters before he tore apart the Starks. He said he really mainly showed Catelyn interacting with her sons and not her daughters, and at this point Michelle joined in and said they would mainly have been doing girly things like sewing, but George still said he wished he had spent more time on them. I would have liked him to as well, but then I think we all feel nostalgia for when the Starks were a whole and happy family.

Kudos to the Wheeler Centre for the friendly staff and the excellent Q&A, where lots of fans got to ask questions, and the super-organised signing, where everyone basically relaxed in their seats until their row was called up. No mad dash or crushing and long line to wait in, no staff making impatient noises and trying to move you along, everyone got a chance to have something signed and have a quick chat with George and Michelle. We had a fantastic evening. Sorry I didn’t manage to get any good photos at all this week, but the Wheeler Centre video of the event should be up later this week so we’ll post it here so you can have a look. Tomorrow, the last book signing in Melbourne before George and Michelle head to Adelaide for Supanova.