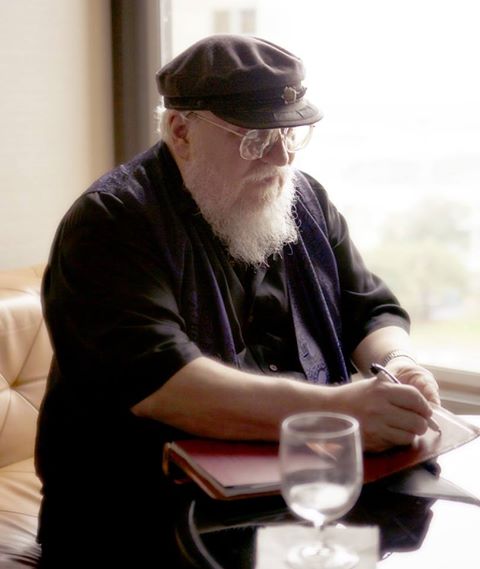 We attended the Dymocks Literary Lunch with George R.R. Martin at the Four Seasons Hotel in Sydney yesterday.

The event ran for about two and a half hours with about an hour of talking and then a book signing, with lunch and a couple of charity raffles filling out the rest of the time. There was quite a mix of fans in attendance,  and a lot of older (and elderly) people in the audience who are part of the regular crowd that attends the Literary Lunches monthly. My in-laws and one aunt are in their seventies and they love the books, but I did flatly refuse to tell George he had to finish the books before they died.

There was an half-hour interview segment presented by the truly dreadful Giles Hardie, who does something or other for Fairfax, launching the interview by mistakenly calling the books “A Song of Fire and Ice” and continuing in a generally vapid manner, going so far as to ask if Australia will ever get its outpost in “a world of Ice and Fire” will we get to say “G’day to a direwolf”, to which George replied “marsupial dragons?” Hardie, clearly pleased with his own wit continued to press the matter by suggesting George include a “Sir Bruce and Lady Kylie” to the chuckles of older folk and much groaning from the younger. He even asked George if he would have considered dressing as Cersei at a fan convention. I was at this point longing for Ramsay Bolton to come and get hold of him.

There was only half an hour allowed for question time which meant only four fans out of hundreds in attendance got to ask a question. George likes to give rather long answers, I think most of us would have preferred extra Q&A time and far less Giles.

We couldn’t get up to take any photos without blocking someone else’s view. Since we booked on the first day we had seats in Section 1 which we were assuming would be good seats. Our table was next to the stage but to the side and pushed so far back we actually couldn’t view George for the duration of the event. All I got to see was the side of Giles Hardie. I figured I would get to meet George outside at the signing at least, although when the line started moving ridiculously fast we realised we probably were not going to get to have a chance to have a quick chat with him (C.S. managed to have a few second chat with George before staff tried to arrest him). The anxious and harried looking staff members didn’t seem to bother about letting the man in the wheelchair go to the front of the line and completely ignored him, although you can always rely on fans to do the right thing and he managed to skip a large portion of the queue.

There was a conveyor-belt type arrangement, where a staff member was literally running over to wrench books off people in the front of the line to pass them to George to sign, subsequently ruining everyone’s photos by getting in the way, including the one we tried to take for a girl in front of us who was attending alone. Photos with George were clearly not allowed but you couldn’t even manage to get one of him signing your books. When we checked the photo later, there was book-girl, photo-bombing. I was almost expecting to be told not to look George in the eye and back away slowly.

We won’t be bothering with one of those again.

Some highlights from the talk:

On whether he lets the television show influence what he writes:” When I sit down to write books I try to pretend the TV show doesn’t exist…I don’t want to reign myself in…but I don’t want to be perverse either and say “oh yes I’ll add this scene with 57 hippogriffs and some dancing elephants because that would make David and Dan’s head explode.”

On the initial creation of A Song of Ice and Fire, George said that one day in the middle of a science-fiction book he was writing, that the image just arrived “the notion of finding of these direwolf pups in the summer snows…born of a mother who had died…born out of death, life out of death…” and that he just started writing,”I didn’t have the name Westeros or Seven Kingdoms… I knew they would find the pups in the summer snow” and that the image of summer snow was pivotal “I knew something wrong with this world to have snows in summer.” The first chapter took him three days to write and by then he knew who some of the people were, and chapter by chapter it became Game of Thrones. He then had to put it aside for two years to work on a television pilot, and when he came back to it it felt like no time had passed at all, unlike other times he had abandoned writing and went “cold” when he tried to go back to it.

George also discussed one deleted chapter that was from the book that was originally going to be Dance with Dragons and ended up being divided into A Feast for Crows, a Tyrion chapter which he called evocative and mysterious. He said he really likes the chapter and he is proud of but it’s a dead end, he put it in and took it out, then re-wrote it s a dream sequence and then took it out again, then divided it into 7 sections and threaded it through each Tyrion chapter then took it out again.

On collaboration projects, George said he wouldn’t like to team up with anyone these days. On whether he had someone to take over the books ‘just in case’ he replied “I don’t plan on dying” but “if I do die you guys are all out of luck.”

On allegory he brought up the subject of Dany “wielding a mass of military superiority given to her by three dragons has taken over a part of the world where the culture and ethos and the very people are completely alien to her and she is having difficulty ruling this land when she conquered it..it did dawn on me when George W. Bush started doing the same thing that some people might say hmmm George is commenting on the Iraq war” but swears he came up with it long before Bush planned the Iraq war.

“I think both military adventures may come to the same end” he added, much to our delight. Well we’re not supposed to read too much into his comments, but we always do.