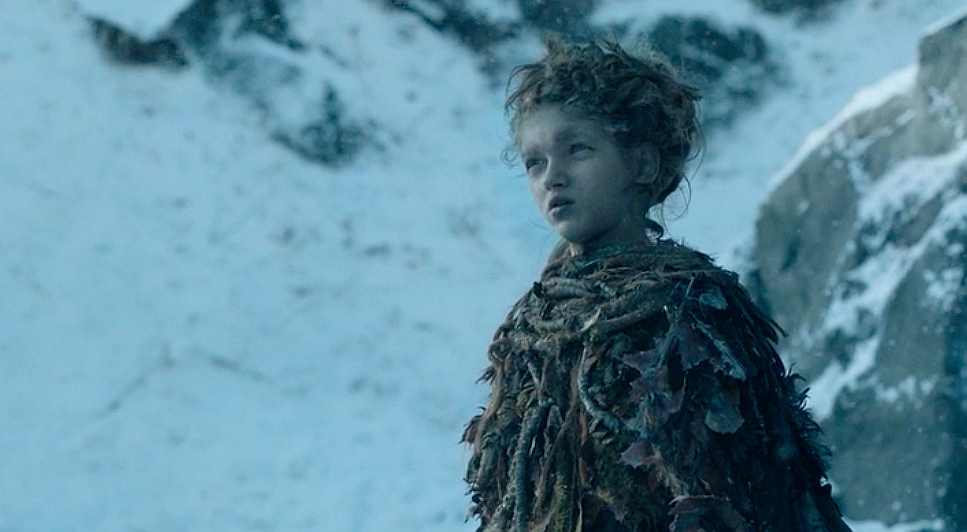 Game of Thrones Season 4 Finale: The Children of the Forest 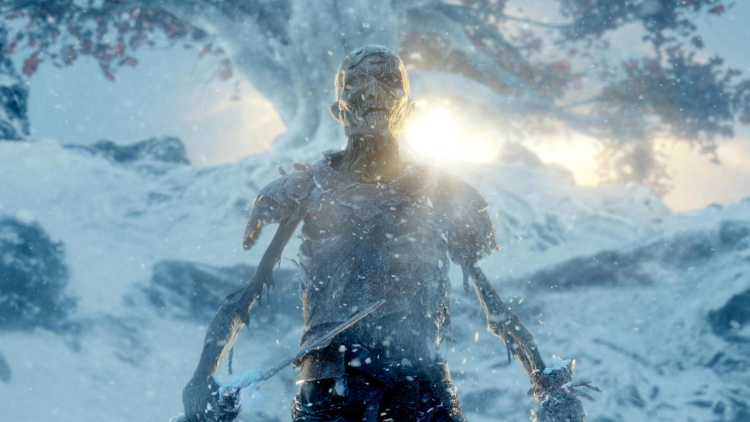 It is obvious that Bran’s story was never going to play out very well to a mainstream audience. The decision to leave out Coldhands has them writing in circles. Bran’s storyline has suffered so much this season and I was really looking forward to this scene. Unfortunately Dan and Dave thought they’d take us back to 1983 complete with dodgy editing, lacklustre production, some seriously cheesy effects and bad writing. Another character, Jojen of course, has been killed off early. As for his scene? First we have Jojen sitting up, Jojen lying down, then a robotic off-screen arm stabbing him. For a series that has set a really high standard for production this was a terrible oversight. The wights looked dreadful. Then fireballs? Really?

And what does Bran do when he encounters the first of the Children of the Forest that haven’t been seen in thousands of years and the Three-Eyed Raven? Not much. More nothing for Bran. I suspect there will be even more nothing next season. I have always really loved George’s history of the Children of the Forest and the First Men. It is a real shame that some of his best world-building has been so neglected in this series. But it’s not going to improve now, so let’s move on. 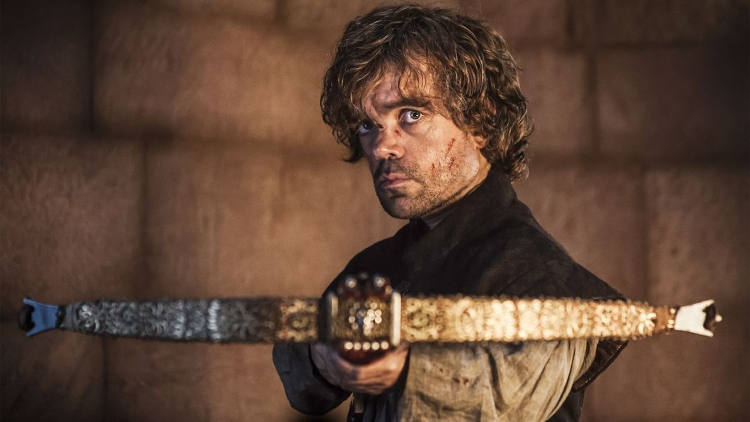 I found the Jaime and Cersei scene really strange. I have no idea what they are doing with that now, especially after that horrible decision in Breaker of Chains. But she has a few more people to sleep with in the coming books, she and Jaime should be drifting apart by now. I am actually glad that Tyrion and Jaime’s parting was altered, I thought it was fitting. The relationship between the two brothers is also one of the positive aspects of Jaime’s character. The fact that the story of Tyrion’s first wife Tysha has not been discussed in the series for a couple of seasons, and not at length, means the original parting between the two of them would have been irrelevant. That is sad in a way, it was a very poignant story in the books, but it was not to be. They’ve also built his relationship with Shae into quite a different thing in the series so finding her in Tywin’s bed gives him just enough motivation to go after his father.

Interestingly Dan and Dave told EW they don’t think Tywin is a villain. Someone should fetch them a dictionary. The whole scene left me a little cold, and I was looking forward to seeing him murdered. But I suspect the rather rushed episode had something to do with that. 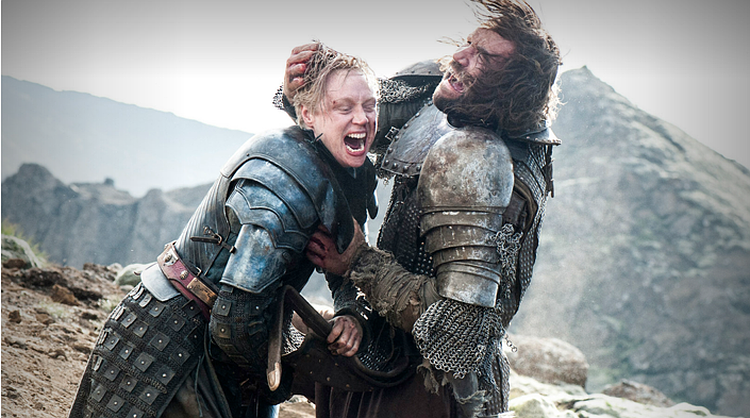 The epic battle between Brienne and the Hound was a rather interesting departure from the books. I am not sure I enjoyed the actual encounter between Arya and Brienne, but I loved the dialogue exchange between Brienne and the Hound. The duel was great, its initial elegance degrading into a real fight to the death. This should prove significant for Brienne’s story next season, I suspect we’ll get to see her early next season and she will encounter Lady Stoneheart. If Lady Stoneheart is written in. It is hard to tell.

And our Arya has finally left for Braavos. I was pleased to see her get the closing scene for the episode. Hopefully she will continue to get plenty of screen time next season. 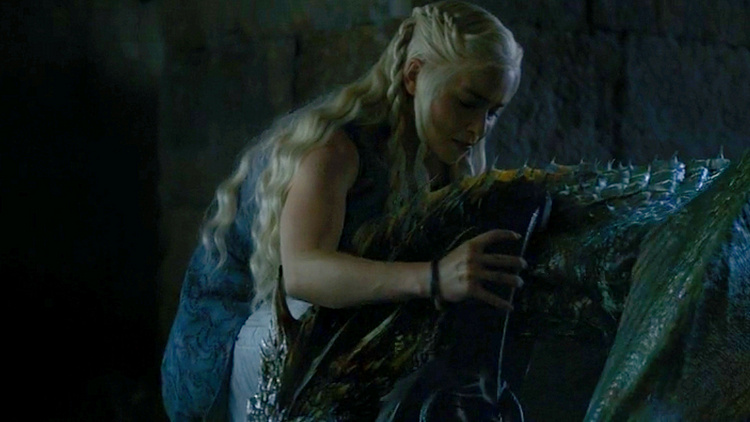 There is nothing more heart-wrenching than screaming dragons. Viserion and Rhaegal being chained up was a really emotional scene. We’re now entering into Daeny’s story in book five. All of her brief scenes this week were excellent, and although Daeny is often afforded the feel-good moments it was nice to see her struggling with the real issues she is going to face on her mission to save the world. 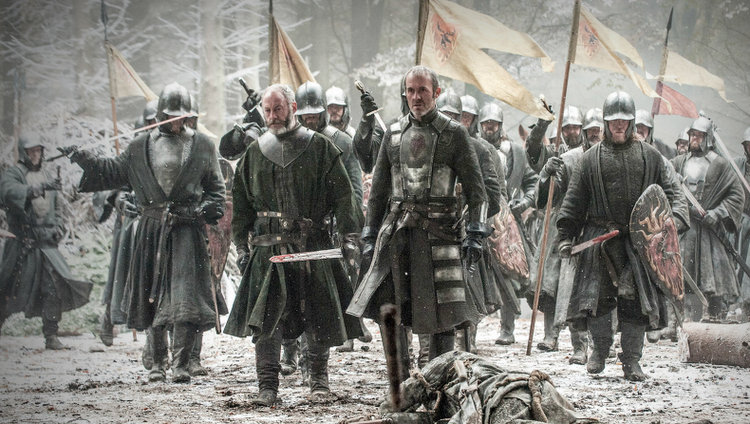 Finally, Mance is back and Stannis has arrived. Everything about the Wall stood out in this episode, from Jon’s encounter with Tormund, to building a pyre for Ygritte, to Jon and Mance, Stannis arriving, and of course Melisandre locking eyes with Jon Snow. It was nice to see them pay their respects to Pyp and Grenn. So while we didn’t have much established in this episode I am hoping we will get much more of the Wall in Season 5.

Dan and Dave promised this would be the best finale they have done, bar none. This season did not follow the traditional route of a slow build to an epic episode nine and then a quieter, more contemplative finale. On the whole Season 4 has not lived up to its predecessor and adaptation of the first half of A Storm of Swords. Some of the controversial, and quite frankly, stupid decisions they have made this season, the various cuts from the books, the early deaths, all point towards the fact that the main idea of the ending has been revealed to the producers, and that Game of Thrones is now merely a race towards the finish.