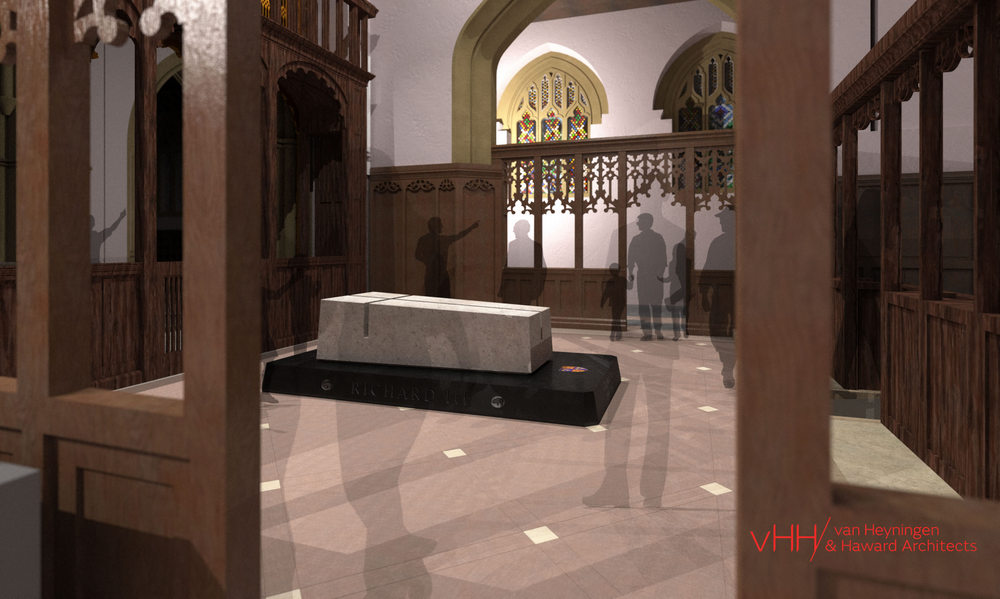 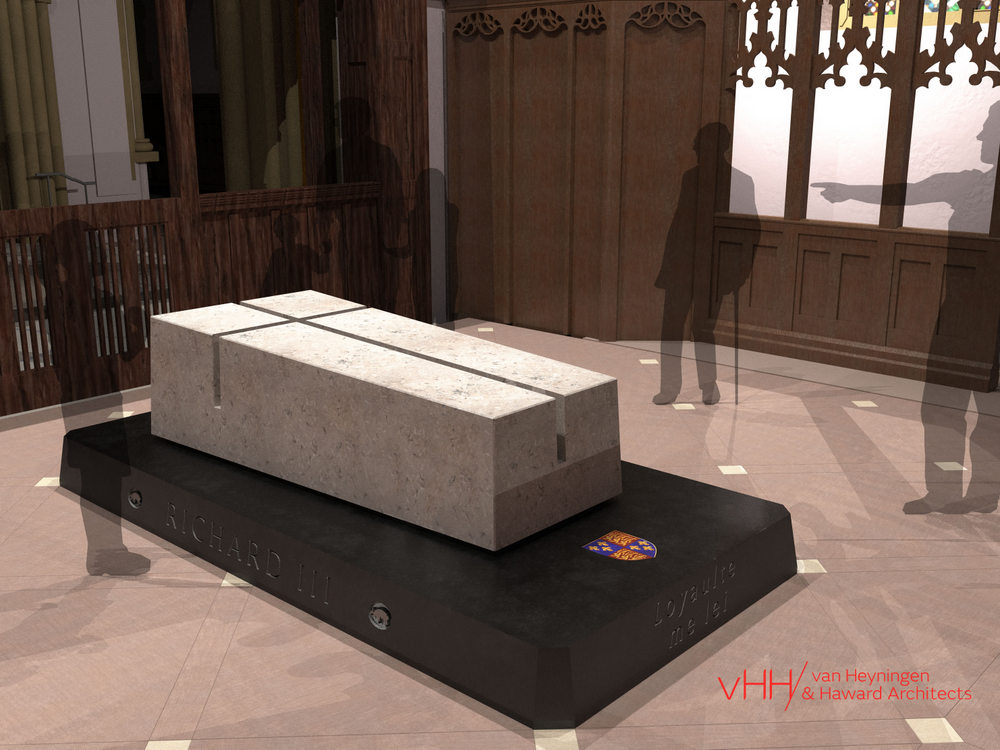 The final tomb design for King Richard III’s resting place was revealed yesterday. The design, which is almost unchanged from the original design revealed last year, is still causing contention. Previously there has been some opinion that the modern design is not fit for a medieval king. In an official statement, the the Dean of Leicester, the Very Revd David Monteith, said ‘This is a tomb which reflects the era in which it is designed as well as the solemn purpose for which it is commissioned. To do anything else would be a pastiche of a medieval tomb and would ignore the fact he is being reburied in the 21st century. That is part of King Richard’s story now.”

BBC Radio Leicester covered some of the issues surrounding the tomb design. Ben Jackson spoke to the Dean of Leicester and to the founder of the Looking for Richard project, Philippa Langley.

David Monteith, speaking just before the unveiling of the design, said: “The design that has now been approved seems to me to combine three elements. It is very distinctive and elegant, secondly it is a design that evokes memory and is deeply respectful of history and thirdly and very importantly given that this memorial will  sit in a…Church of England Cathedral it’s a design deeply imbued with spirituality and with a sense of stillness that will evoke, I think, a degree of wonder and awe in people which is very much part of our mission.”

Reverend Mandy Ford discussed the changes to the plans for the interior of the Cathedral. “We have long conversations with the CFCE about the stone floor and the rose motif which some people really liked and others felt just jarred a little bit; they weren’t entirely happy with it, so the architects went back and looked at it again and we now have this simpler dark plinth which really makes the tomb itself stand out very strongly and which will be a lovely foil to the letter cutting, so that Richard’s name, his coat of arms and so on will really sing out from that dark marble.”

On the controversial design of the incised cross on the tomb, she said “What you will see as you come towards the tomb is actually not a dark cross but light coming through the cross…you’ll also be looking up towards these wonderful new stained glass windows being commissioned by Tom Denny which shows stories of Richard’s life, the whole thing framed by a new chapel on one side and the relocated Nicholson screen on the other.”

The King Richard in Leicester website also details the spiritual ideas behind the tomb design “It is tilted slightly, as if rising to meet the risen Jesus. For centuries Christians have been buried with their feet in the east and heads in the west, ready to stand and face Jesus when he returns – usually assumed to rise again in the east just as the sun rises in the east each morning. The cut is cross shaped, to show that this new life was won through the death of Jesus, a Christian belief which would have been fundamental to King Richard himself.”

The design of the tomb has been a contentious topic since it was revealed last year. The Richard III Society has been vocal about their disapproval, withdrawing an initial £40,000 contribution. Philippa Langley discussed her reservations about the tomb design with Ben Jackson. “79% of people in Leicester, when they were asked about the slashed cross design voted against it. As Ricardians we’ve made no secret that [we think] the gashed sort of cross dishonours the King really, in every possible way. They see the slash marks as making a mockery of the way the man died on the field of battle and sort of caricaturing the wounds that he received…he was an incredibly pious man and he revered the Christian symbol of the cross, it was a big sign of his faith. When the Cathedral launched their very first design it had a beautiful cross on top of it and that was received with almost universal acclaim, so we’re really disappointed that the slashed cross is still there.”

When Jackson asked Philippa if she was not reading too much into it she replied: “That’s a general perception…across the board…when the design was released this morning it kind of went into meltdown here, with people saying they don’t understand why a contentious design would still be chosen. What they’re saying is, with the black plinth, his name will now be carved into black so there’s now all these connotations with Shakespeare’s black legend, he’s now got no white roses from the house of York, he’s now got black roses. We’ve asked for a meeting in Leicester on Monday so that we could put some proposals to them, and we hope we still can put some proposals to them…our thinking was there’s ways we can slightly modify the design where it won’t be contentious any more.”

Philippa agreed with Jackson that the goal was now indeed to move forward with the burial. Philippa added: “When you visit Leicester the people…are so proud of Richard III, the last Warrior King and their associations with him. All we would be saying is let’s put it to the people of Leicester, let’s ask them, let’s bring them into the process. There’s three things [we would ask]. Can we give him white roses, on the corners on the floor…give him small white roses on the corners so we have the white rose of York, is there something that can be done so that his name is not carved in black and can we give him a raised cross? What we would ask, and what everybody has been asking me, is if [we could take] those two designs, if we could then put those to the people of Leicester and ask them which one they want?”

Jackson then spoke to Rev David Monteith and asked for his response: “It’s always good to hear Philippa, and she’s been part of this story all along, she’s a significant voice and we’ve listened quite carefully to her and members of the Richard III Society. But of course Richard III doesn’t belong to Philippa nor the Richard III Society, he belongs to the whole nation.” Jackson then emphasised that we wouldn’t be here without Philippa’s determination, and asked if there are not areas where they could negotiate on the design. The Dean replied: “Actually the white rose aspect is a very minor little thing, it’s always been talked about in the process and…I think that is the sort of thing we can do. I don’t think that’s contentious in any way but I think the fundamental design in both the Kilkenny limestone plinth and the main stone with the deep incised cross, that’s the design which has now been accepted and that’s no longer up for debate.”

“We’ve gone a long way addressing many of their concerns already and actually that’s been a really helpful process, they’re a significant voice in the conversations that led to the designs that we’ve got. There’s many things there…for example they were very keen for us to include the arms of England, well we’ve done that and that’s a clear win. This is a complex process involving many voices. Philippa said she’s heard from many people who aren’t happy the the design, well I’ve heard from loads and loads of people who are very happy with it. Whatever we do is going to cause a degree of controversy.”

Addressing the placement of Richard’s remains in an ossuary box, the Dean said “It’s about treating his remains with the most profound respect. If you just lay him out anatomically in a coffin then of course when he’s buried we have no idea what will happen to those remains underground over time, and it would seem a very irresponsible thing to bury him in such a way that would deliberately result in the degradation of those remains. We need to take on-board what the historical conservationists and the archaeologists say in creating an ossuary that will potentially take those bones with the maximum amount of care.” The Dean confirmed the bones will not be laid out anatomically. He added he understood the emotional response to that but thought it did not bear scrutiny, pointing out that remains of many monarchs, popes and saints have been placed in ossuaries. “I certainly don’t want to go down in the history books as the dean who was irresponsible in the way that his bones were treated.” He also denied that the remains were being treated with a view to being exhumed again in the future. “I cannot make that assumption, and as a priest when I bury him I am burying him for good. I can’t be the person, nevertheless, that treats his remains with disrespect.”

The meeting between representatives of the Richard III Society and the Cathedral will take place on Monday the 23rd of June.