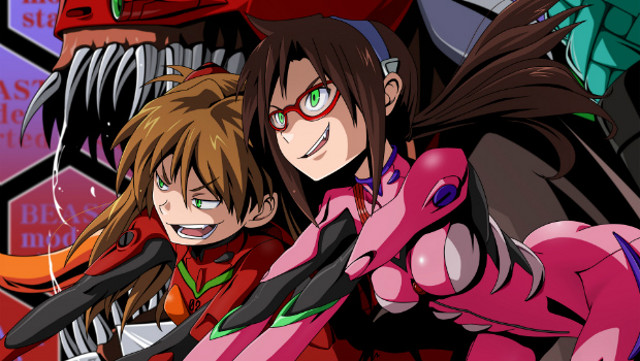 Evangelion 3.0 You Can (Not) Redo – Neon Re-Genesis -Teaser

Evangelion – giant semi-living robots known as Evas controlled by a group of neurotic or otherwise messed up kids versus giant alien god beings known as Angels. Created out of the life-stuff of the very beings that seem bent on the destruction of the Earth in a world barely recovering from human self-destruction.

Here is iteration 3.0. That which can not be done, the re-creation of the world destroyed by unification in the oneness of the godhead, redone. Teaser trailer follows.

There have been various versions/there will always be another version.

(1997) Death & Rebirth (A re-edit of the series with an additional 27 minutes of new footage. A new toward a new ending.)

(1997) The End Of Evangelion (The new footage re-edited with a reworking of the last two episodes.)

The Tetralogy uses 3D CG animation (unavailable when the original series was made), creating new settings, scenes, events and even characters. While remaining true to the original series, it attempts to make the story more accessible to a wider audience than the cultish following of SF and anime fans loyal to the TV sereis.

Since 2003 there has (not) been a plan to create a live action film version, between the American distributor ADV, WETA Workshop and the Japanese parent company, GAINAX. Various complexities and entanglements have resulted in the project being caught in development hell. However ADV are still hopeful. As are we all.

Evangelion 3.0 You Can (Not) Redo will be presented in Australia by Madman as part of the 2013 Reel Anime Film Event. Stay Tuned.