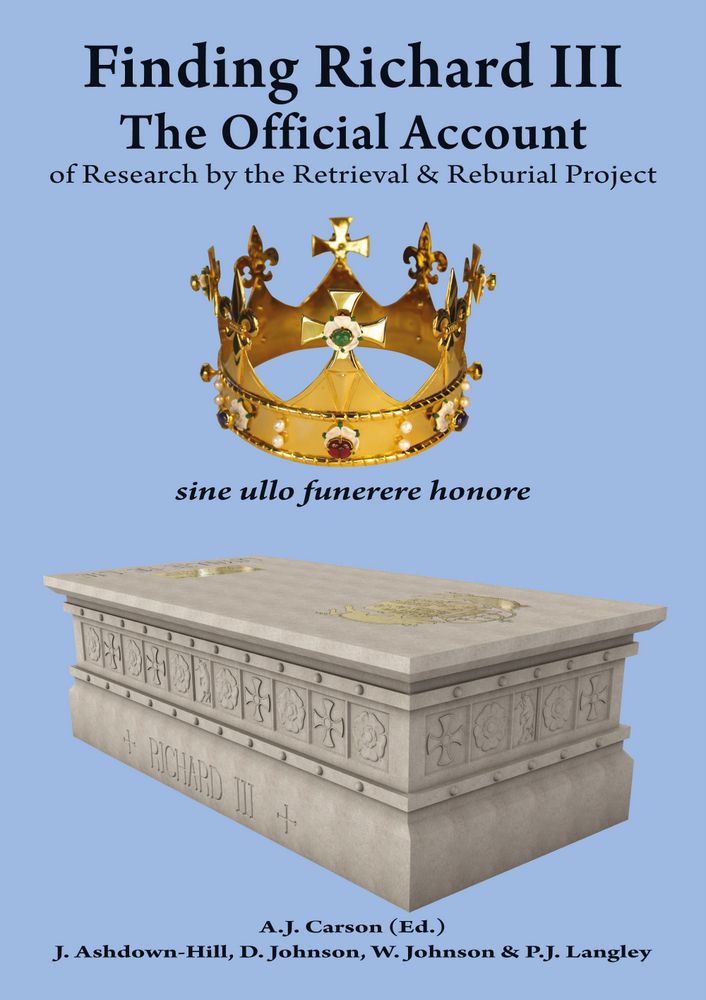 Finding Richard III: The Official Account of a Remarkable Journey

It is almost strange to see the culmination of  years of hard work and dedication compressed into a series of neatly laid out pages. But here it is, the long-awaited story behind the Looking for Richard Project’s search and rediscovery of King Richard III.

Co-authored by the founding members of the Looking for Richard Project, Dr. John Ashdown-Hill, Dr David and Wendy Johnson, Annette Carson and Philippa Langley, Finding Richard III: The Official Account of Research by the Retrieval and Reburial Project covers not only the archaeological dig that led to the rediscovery of his remains, but the years of previous work that inspired the search. Rediscovering the actual location of Richard’s grave has been a source of interest for Ricardians for decades, and Finding Richard III examines both the near-contemporary accounts such as John Rous and Polydore Vergil and previous modern studies by Ricardians Audrey Strange and Rhoda Edwards. A study of Richard’s original tomb discusses payments made for the construction of the tomb, some early descriptions of it and how it succumbed to the elements after the Greyfriars church was destroyed during the Dissolution. A look at Leicester residents historian David Baldwin and Ken Wright’s attempts to persuade people that the River Soar theory was a myth is certainly interesting, even more interesting is how the myth actually took hold. Dr. John Ashdown-Hill’s genealogical research and discovery of the mtDNA sequence of King Richard III that was crucial in identifying Richard III’s remains is discussed, and a thorough outline of the work in securing the fund-raising and services for the archaeological dig and the costs of the dig itself. A postscript touches on various important events since Richard III was disinterred. The appendices include the Epitaph on Richard’s original tomb, an Archaeological Dig Cost Breakdown, the original pamphlet for an urgent appeal for pledges to the Greyfriars Project and an honour roll of those who donated to the appeal. And then there are the long-awaited documents pertaining to the original agreements between Looking for Richard Project, Leicester City Council and the University of Leicester Archaeological Services.

We have previously discussed the original agreements between the Looking for Richard Project and ULAS at length on this website. When Richard Buckley was contacted regarding Just Who is the Custodian of King Richard III’s Bones? he responded that it was “woefully inaccurate on many many counts!”.  The Written Scheme of Investigation included in the appendices, and signed by Richard Buckley and Leon Hunt, is illuminating. It includes the agreement to transfer the remains of Richard III to the Client/and or representatives for reburial (the Client in this case being Philippa Langley). It promises that ‘best endeavours are to be made to ensure a minimum period for the laboratory identification work’ even though the University then decided to subject Richard’s remains to further scientific testing. Somewhat surprising is the promise to archive the photographic record of the investigation “Only those persons from the recognised scientific community and with reasons of substantiated legitimate scientific research will be allowed…appropriate access to view the photographic record of the remains.” Surprising indeed, considering that nowadays nary an article published in the commercial newspapers about Richard III are not accompanied by a grisly image of his skeleton. So for those who have been voicing doubt that these agreements ever existed, here they are, in black and white. Buy the book and read it for yourself, you may come to the realisation of exactly how much of the agreement was flouted and just how much patience the members of the Looking for Richard Project have had to exercise.

The Looking for Richard Project team has truly re-written history – so read on and find out exactly how they did it.
Dr Christopher Thornton FSA FRHistS
Associate Fellow, Institute of Historical Research

The Looking for Richard Project certainly has changed history. But this is not a history book, not yet. It will be some time before the search for Richard III passes into history. King Richard III has yet to be reinterred. Controversy still simmers at every turn and is not likely to die down until he is finally laid to rest again. Yet Richard III’s memory will outlive the current controversies, and it will outlive many of us. When the dust has finally settled perhaps we can get back to what inspired the search for his grave in the first place. Richard has had supporters as early as the 15th century. Margaret Beaufort’s servant Sir Ralph Bigod refused to hear any insult against his former master. Richard’s first written defence was penned by Sir George Buck in the 17th century. More and more historians would demand a new look at his life and reign. Ninety years ago The Fellowship of the White Boar was formed, and today is still going strong as the Richard III Society. And one of the most positive aspects of the rediscovery of Richard III’s remains is all of the renewed interest in his story. Well, he now has a new story, and a storm of new Ricardians. Perhaps in a hundred years the Richard III Society will still be welcoming new members. And historians will still be writing books about Richard III. And perhaps in another five centuries they’ll wonder how Richard III is still bringing people together in friendship, and they’ll be amazed at the tenacity of a small group of individuals who defied all of the odds and overcame much adversity, and rediscovered their lost King.

You can order your copy of Finding Richard III: The Official Account from:

UK Residents from Annette Carson’s website. Click here to order.
Rest of the World from the Richard III Society shop.

A freelance historian; historicalresearcher; writer and lecturer; theleader of genealogical research and historical adviser on the ‘LOOKING FOR RICHARD’ project, which led to the rediscovery of the remains of Richard III in August 2012. His first degree was in history and French, followed by an MA in linguistics, and ultimately by a PhD in history, centred upon the client network of John Howard Duke of Norfolk in North Essex and South Suffolk. Since 1997 he has regularly given historical talks, and published historical research, achieving a certain reputation in aspects of late mediaeval history. His publications include six books, five of which are focused on the late Middle Ages. He has participated in British, Continental and Canadian documentaries on the search for Richard III, a general historical documentary on the life of Richard III for the USA and a forthcoming Channel 4 documentary on the fate of the ‘Princes in the Tower’.

Having originally studied at the Royal College of Music, her career included working as a TV Organiser for British Equity, Programme Manager for Thames TV, and in PR and advertising as an award-winning copywriter. A freelance author with a preference for history and biography, she has sold over 46,000 non-fiction books on subjects including aviation and music, writes articles and has contributed to Encyclopædia Britannica. Her history of aerobatics was awarded the Tissandier Diploma of the Fédération Aéronautique Internationale. With a lifelong interest in Richard III, in 2008 she published Richard III: The Maligned King which led Philippa Langley to invite her to join the ‘LOOKING FOR RICHARD’ project as a historical consultant. In 2013 she published a short paperback (and eBook), Richard III: A Small Guide to the Great Debate, aimed at explaining the controversy to the general reader.

Dr David and Wendy Johnson are long standing members of the Richard III Society and frequent contributors to the Society’s quarterly journal the Ricardian Bulletin. David, whose PhD in history was awarded by the University of York in 2013, is the author of Adwalton Moor 1643: The Battle That Changed A War (Blackthorn Press, 2003), and Wendy has sold and exhibited portraits of people and animals. David is preparing a new study exploring the political controversy surrounding Richard III’s accession to the throne, whilst Wendy is currently researching a proposed trilogy based on the Wars of the Roses.

A screenwriter and producer, Philippa Langley inaugurated the ‘LOOKING FOR RICHARD’ project and led the successful search to locate King Richard III’s grave. She is a TAPS writer, a BAFTA Rocliffe shortlisted writer, and finalist in SWF’s Scriptmarket and Channel 4’s ‘Son of the Pitch’ competition. Her 90 minute documentary, The King in the Car Park, made with Channel 4 and Darlow Smithson Productions, was Channel 4’s highest rated specialist factual show, going on to win the Royal Television Society Award for 2013 and a BAFTA nomination in 2014. Her screenplay Richard III: Last of the Warrior Kings on the life of Richard III is based on Bosworth 1485: Psychology of a Battle by military historian Michael Jones, with whom she co-authored The King’s Grave: The Search for Richard III in 2013. Founder of the Richard III Society’s Scottish Branch, she is a regular contributor to the Ricardian Bulletin magazine and was awarded the Society’s Robert Hamblin Award in 2012.