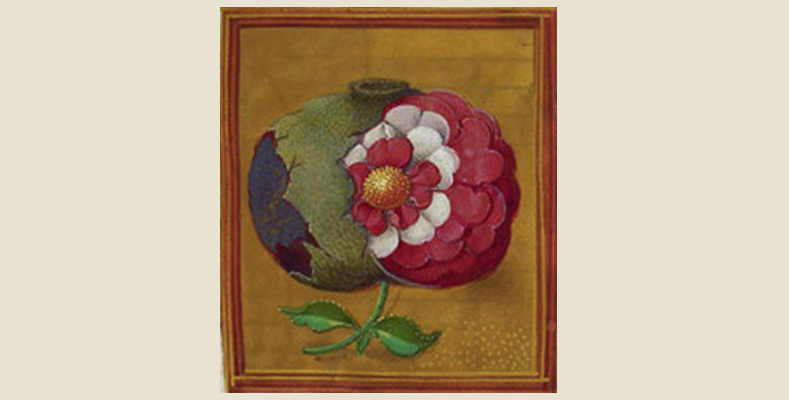 Royal Library: The Rose and Pomegranate – Henry VIII and Katherine of Aragon

The alliance between England and Spain was supposed to be the great triumph of the new Tudor dynasty. For Katherine of Aragon it ended in tragedy, twice. Yet the first decade of her marriage to King Henry VIII was blissful and their marriage was seen as an ideal to be aspired to. As Erasmus told Henry VIII in 1519 ‘What family of citizens offers so clear an example of strict and harmonious wedlock? Where could one find a wife so keen to equal her admirable spouse?’

Katherine’s love of books was evident early on. A newly-wed Katherine was plagued with melancholy and homesickness when her Spanish entourage departed England after her marriage to Prince Arthur. Henry VII attempted to remedy this by inviting her to see his collection of books. He  ‘curtesly lete desire and calle unto him the Princess and her ladies with dyvers ladies of England and brought them to a lybrary of is, wherein he shewed unto her many goodly pleasaunt bokes of werkes full of delitfull, sage, mery, and also right cunnyng, both in Laten and in Englishe‘. The gifted and intelligent Katherine had been corresponding with Arthur for many years before she came to England, and they had chosen Latin as a common language for their correspondence. And after Arthur’s untimely death, books were amongst the gifts Elizabeth of York would send her widowed daughter-in-law.

Henry VIII inherited his parents’ love of books. He also inherited the vast library started by his equally bookish grandparents, King Edward IV and Elizabeth Wydeville. One of the first examples of a book jointly dedicated to Henry and Katherine was Thomas More’s ‘Coronation Suite’, a collection of poems presented to the new King. More is equally effusive in his praise of the new Queen of England, Katherine.

She it is who could vanquish the ancient Sabine women
in devotion, and in dignity the holy, half-divine
heroines of Greece.
She could equal the unselfish love of Alcestis
or, in her unfailing judgment, outdo Tanaquil.
In her expression,in her countenance, there is a
remarkable beauty uniquely appropriate for one so great and
good.
The well-spoken Cornelia would yield to her in eloquence;
she is like Penelope in loyalty to a husband…
…She is descended from great kings, to be sure; and she
will be the mother of kings as great as her ancestors.
Until now one anchor has protected your ship of state —
a strong one, yet only one.
But your queen, fruitful in male offspring,
will render it on all sides stable and everlasting.
Great advantage is yours because of her, and similarly is
hers because of you.
There has been no other woman, surely, worthy
to have you as husband, nor any other man worthy to have
her as wife.

In the prefatory letter that accompanied the manuscript More blamed the tardiness of his offering on the gout suffered by the illuminator. The illumination depicts Henry VIII’s Tudor rose and the pomegranate of Granada adopted by Katherine of Aragon. The rose and pomegranate, a symbol of fertility, are entwined, promising a fruitful union.

Another example of the union of the rose and pomegranate, in what James P. Carley calls a ‘rather provocative manner’, is a book of music by Petrus Alamire, a music scribe in service of Margaret of Austria. He created a group of books sometime between 1510 and 1520, one of these honouring Henry VIII and Katherine of Aragon. The Book of 28 motets was probably presented to the royal couple by Margaret of Austria or Archduke Charles.

This manuscript includes a collection of motets by a ‘Magister Sampson’. James P. Carley dates it at either 1513, a rare year of military victory for Henry (Katherine was regent when Norfolk won them the Battle of Flodden) or 1516 when Henry was reunited with his sisters Margaret and Mary shortly after the birth of his only daughter Mary Tudor. Either year, Carley notes, was a year for rejoicing.

The illumination does refer to both Henry’s sisters, with daisies for the Queen of France and marigolds for the Queen of Scots. The bush of the Tudor rose incorporates a Latin poem celebrating the house of Tudor. The walled garden surrounded by water represents England, flying the banners of England, George, and Castile. The Beaufort portcullis is visible in the tower gate, a lion graces the gateway flanked by the Tudor dragon and greyhound, with the words salve felix Anglia. 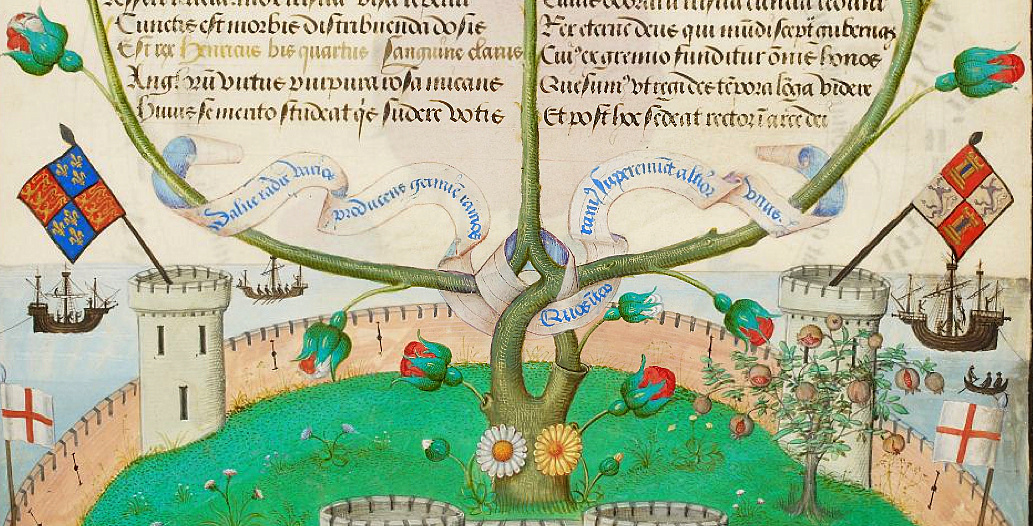 Katherine and Henry are represented by the banners of England and Castile flying from twin towers. Katherine’s device is visible on the right, a pomegranate bush bearing fruit under her banner. It’s a rather poignant reminder of what was once the great hope of Henry VIII’s reign, a blissfully happy union that ended in sadness.