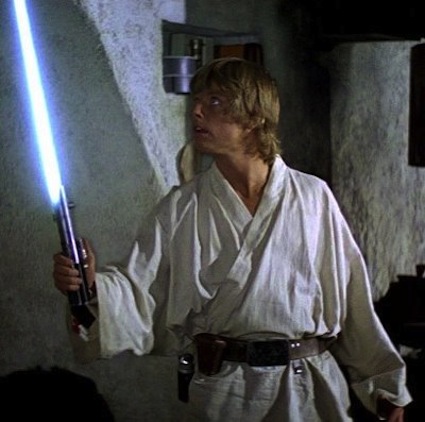 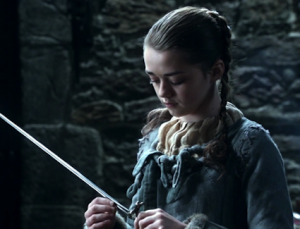 Speak the name, and death will come. On the morrow, at the turn of the moon, a year from this day, it will come. A man does not fly…but one foot moves and then another and one day a man is there, and a king dies. – Jaqen H Ghar

Arya Stark, the youngest daughter of Ned Stark, the ill-fated Lord Of The North who lost his head in George R R Martin’s A Song Of Ice and Fire, suffered not only that loss, but the loss of all she held familiar, the loss of kingdom, the loss of family, the loss of friends. Disguised as a wastrel, an outlaw, lost in the lawlessness of ravaging war, she swore revenge on the perpetrators. Lost she held onto two things as circumstance ebbed and flowed around her; her litany of vengeance, the killers of her family and friends, and the sword given her by half-brother, John Snow.
Chance saw her meet and free from certain death by fire Jaqen H’ghar, a Faceless Man, a wandering, mystic warrior, a magical assassin, able to change his face, to become anyone to complete his task. Chance and determination eventually led Arya to Braavos, to The House Of Black And White – a temple to the succour death, where he learned his art. To walk that path both strange and arcane rites were required of her, and also tasks as mundane as sweeping the floor, or selling fish in the street from a cart, disguised as Cat of the Canals. Of course these seeming futile tasks had purpose; learning obedience, learning the life of the street, of ordinary folk, learning the language, the voices of people, also learning deception, how to deceive and how to see deception.
And yet Arya failed to learn the most necessary lesson. Every day before dawn, the dwellers in the temple say a prayer to the Many-Faced God. Arya doesn’t know the language, in silently recites her own prayer, “Ser Gregor, Ser Amory, Ser Meryn, Ser Ilyn, King Joffrey, Queen Cersei. Valar Morghulis.” Every night the Kindly Man, who teaches her in the temple, ask her who she is. Arya’s reply; no one. But in her heart she is still Arya Stark. To acquire the skill, to become a Faceless Man, she must forget herself. That which drove her there in the first place, her vengeance and her family, symbolised by her prayer, and the sword Needle, gifted by John Snow.
She gave up everything else, casting her things into the river, but Needle she concealed under a loose stone in the step outside the temple, returning to it occasionally. Her vengeance also, although buried deep, still burning, a dark coal in her heart. 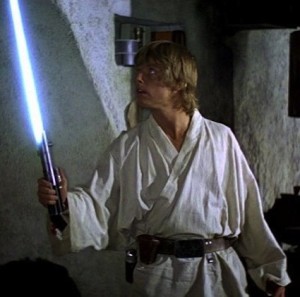 Train yourself to let go of everything you fear to lose. – Master Yoda

Luke Skywalker as a young man lived a mundane existence, helping his Aunt Beru and Uncle Owen on their moisture farm on the desert planet Tatooine, and dreamed of training to be a pilot at the Imperial Academy. Until an encounter with two runaway droids carrying a secret message lead him to old hermit, Ben Kenobi. The rest, as they say, is history. Revealed as a Jedi Master, Obi Wan Kenobi, sensing the Force, the mystical power of the Jedi, is strong in Luke, offers to take Luke as his Jedi apprentice. Luke learns from him the secret of his family, and his destiny; that his father was a Jedi, killed by the traitorous Sith Lord, Darth Vader, and that it is Luke’s destiny to also become a Jedi. Luke at first rejects his destiny, but discovering his home destroyed and his aunt and uncle killed by ruthless forces of the Empire he flees Tatooine with Kenobi, and begins learning the way of the Force.

Later, Obi Wan Kenobi sacrifices himself in a duel with Darth Vader. Luke is devastated, but guided by Kenobi’s spirit, he goes on to help the Rebel Alliance destroy the Empire’s planet destroying Death Star.
Luke is again guided by Kenobi’s spirit, instructed to complete his training on the swamp planet Dagobah. There the Jedi Master Yoda schooled Luke not only in developing the power of the Force, the psychokinetic and precognitive senses, but also taught him that to achieve power he must let go of hate, the hate that motivated him.

Fear is the path to the dark side. Fear leads to anger. Anger leads to hate. Hate leads to suffering. – Master Yoda

While growing in the power of the Force, Luke left before he achieved that understanding, the ability to let go. Through the Force he sensed his friends were in danger and pain. “If you end your training now – if you choose the quick and easy path – as Vader did, you will become an agent of evil.”
Nevertheless, Luke chose to leave. While strong in the Force, he could not claim to be a fully fledged Jedi. His earthly concerns, his emotions and motivations, both held him back and tempted him to the power of the dark side. In a final confrontation with his enemy, Vader, tempted to the dark side by the evil Emperor Palpatine, Luke’s fury sees him defeat Vader, he almost surrenders to anger and hate. In that moment he throws down his light saber. He refuses to join the Emperor. It is a moment in which he encounters, loses, and gains himself. 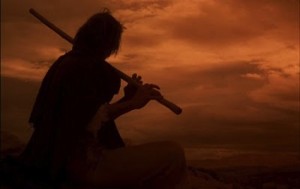 The seekers fight their way here year after year. Willing, eager to pay the terrible price to see what is in that book. And when they fling it open in blazing expectation of finding all the answers to all of life’s questions. And what do they find? Themselves! There is no book, no enlightenment outside yourself. – Zetan

The 1978 cult martial arts fantasy, The Silent Flute (also known as Circle Of Iron), based on a story by Bruce Lee, stars Jeff Cooper as Cord, and David Carradine in many guises, in the role Bruce Lee was going to play himself.

Cord defeats all in a martial arts competition to win the right to pursue the quest to challenge the legendary warrior, Zetan for the ultimate mystery, the book of Enlightenment that contains all the world’s wisdom. And yet the manner of his victory is deemed dishonourable or unfair, Cord belongs to no particular school or philosophy, and the medallion that marks the possessor as on the quest to find Zetan is given to his rival, Morthon.

Cord departs in anger, and decides to follow the honourable Morthon, to confront Zetan himself, and see the book, regardless of approval. On the way they encountered a nameless, blind, flute playing traveller, played by David Carradine, in a role that echoes Kwai Chang Caine, but also shows many other faces.
The blind man enters a building and is attacked. Cord goes to see if he can help, while his Morthon departs in the hope of being rid of Cord. The traveller, although blind and only armed with a long staff that is also a flute, easily defeats the attackers.

Cord, impressed asks the blind man if he will be his teacher. The traveller, then in various guises, as trickster and master, both opposes and guides him, in order to impart both martial and spiritual lessons.

Cord learns from both victory and failure, that to achieve the wisdom and the skill to defeat Zetan, to gain the book of Enlightenment, he must let go of all preconceived ideas, a letting go of distractions and desires, a letting go of the self, and winning through is shown the way to Zetan and the Shangri-La like temple of the keepers of the book. Cord is given the choice; he can choose not to look and become the keeper of the book, as Zetan had. Cord chooses to look, and finds the pages of the book are a mirror. Thus to find oneself, one must lose oneself, and yet the true warrior must also retain oneself, rather than fall into the purely contemplative, the purely mystic. The all powerful Zetan was essentially a prisoner of the mystic itself bcome an object. Cord leaves, joins the blind man, now no longer blind, and is given his staff – the silent flute. Cord, having learned that the self is both the mystery and the path, the obstacle and the goal, that which must be found to be let go, becomes the teacher.

Be it love or God, Christian knights of medieval legends are always fighting for something perceived as higher than themselves. Be it for king, country, treasure, a fair maiden’s hand, brotherhood, freedom or God, it is a battle for something outside of the self. Even the battle for Jerusalem is still for something worldly. It is something that carries through to today’s ethos, and, in George R R Martin’s A Song Of Ice And Fire. With origins based in the mythology, the culture and conflicts of Medieval England.

Except for Arya Stark, whose path, as a mystic warrior, is derived from the Eastern Tradition. It is not yet clear in George R R Martin’s books what shall become of Arya. However, if she follows the path of the mythology, the structure of the legend that drives her narrative, she shall both learn her art and retain her self. What her victory may be, we don’t yet know, but that victory is certain.