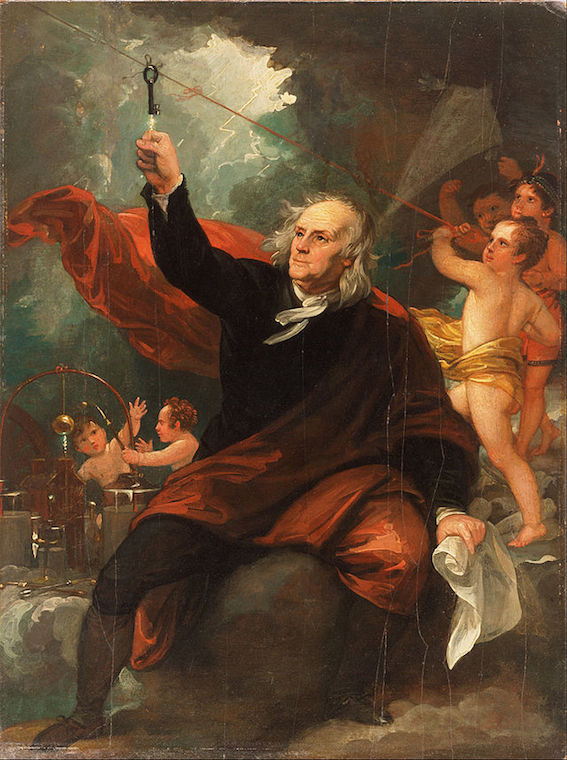 The new season of Sleepy Hollow began in spectacular fashion, with our heroes Ichabod, Jenny and Abbie racing against time to thwart a plot by demon Moloch and his minions raising an army of lost souls in Purgatory to attack the human world.

The key to the plot is the actual key used by US Founding Father Benjamin Franklin in his kite flying electricity experiments. Apparently he wasn’t trying to learn about electricity, he was hoping lightning would destroy the key to the hellish realm of Gehenna. And Ichabod was the assistant in the endeavours of the irascible old inventor and statesman, whose achievements include bifocal spectacles, the glass harmonium and the flexible urinary catheter. Necessity being the mother of invention, he reportedly contracted various sexually transmitted diseases, and possibly syphilis, which he attributed to the service of English prostitutes while he was living in that country prior to The American Revolution. It seems a burning passion for freedom was not the only sensation inspired in him by the English.

One of the main authors of The American Declaration of Independence, a slave owner and abolitionist, who fathered several illegitimate children, a progressive thinker, he was also an advocate of nudism, or naturism, as it was referred to in previous eras. Franklin described getting his gear off as having an “air bath” and found divesting himself of clothes both physically healthful and beneficial to mental work. He encouraged others to enjoy the benefits of naturism.

George Washington and Thomas Jefferson, like Ichabod, undoubtedly looked on slightly askance at the antics of the eccentric genius. While unencumbered by clothes Franklin contributed to some of the most important documents in American and world history, The Declaration Of Independence, The US Constitution, The Bill Of Rights, however the thought of old Ben swinging free while defining freedom certainly adds a somewhat different sense of gravitas to those documents, and indeed, the entirety of American history. We can only wonder whether it was Thomas Jefferson or John Hancock who scratched out the 11th Amendment – The Right To Bare Everything.

Season 2 of Sleepy Hollow airs on Monday nights on Fox in the US, while the start date for Australia has yet to be announced by Channel 10.