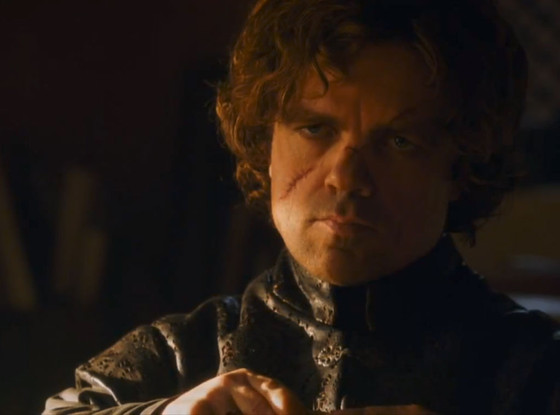 “Then he saw the other one, waddling along half-hidden by his brother’s side. Tyrion Lannister, the youngest of Lord Tywin’s brood and by far the ugliest. All that the gods had given to Cersei and Jaime, they had denied Tyrion. He was a dwarf, half his brother’s height, struggling to keep pace on stunted legs. His head was too large for his body, with a brute’s squashed-in face beneath a swollen shelf of brow. One green eye and one black one peered out from under a lank fall of hair so blond it seemed white.” (A Game Of Thrones, p.98)

Thus Jon Snow first observed Tyrion Lannister, as Tyrion walked with his golden brother, Jaime, entering the the Great Hall, when the royal party first arrived at Winterfell. Used to the grey of the north, the royal family in all their bright finery was something to behold, and Jon watched Tyrion with a 14 year old’s fascination for the weird.

Tyrion was misshapen, malformed, not only ugly but profoundly unusual. This was not just Jon’s youthful perception of the dwarf. As Tyrion’s own father said, more than once, but with especial vehemence when Tyrion asked to be named his heir, “You ask that? You who killed your mother to come into the world? You are an ill-made, devious, disobedient, spiteful little creature full of envy, lust, and low cunning. Men’s laws give you the right to bear my name, and display my colors, since I cannot prove that you are not mine. To teach me humility, the gods have condemned me to watch you waddle about wearing that proud lion that was my father’s sigil and his father’s before him. But neither gods nor men shall ever compel me to let you turn Casterly Rock into your whorehouse.” (A Storm Of Swords, p.106) Tywin saw in Tyrion something akin to the changeling of myth and story, a creature, perhaps not even human. Foul, ugly, misbegotten, not a child, but a torment, an imp.

Tywin’s opinion was coloured by the death of his beloved wife, Joanna, who died giving birth to Tyrion. But as Tyrion told Jon Snow, as they travelled north to the Wall, “When I was your age, I used to dream of having a dragon of my own…Oh, yes. Even a stunted, twisted, ugly little boy can look down over the world when he’s seated on a dragon’s back.” (A Game Of Thrones, p.226) and with the remarkable, pragmatic honesty, which also has a certain honour to it, which is one of Tyrion’s traits, on observing his brother and and sister, he “wondered what it would be like to have a twin, and decided that he would rather not know. Bad enough to face himself in a looking glass every day. Another him was a thought too dreadful to contemplate.” (A Game Of Thrones, p.167)

In the harsh north such a creature would have been more like to be quietly left in the snow, to die. In the Lannister’s own seat of Casterly Rock, had Tyrion not been of noble birth, he would certainly have been drowned at birth. The fact of Tyrion’s face, his appearance is one of the most fundamental things about his character. It not only colours his father’s and sister’s relationship with him, his perception of himself, his relationships with women, it also defines how both the nobility and the small folk perceive him.

Peter Dinklage has done a brilliant job capturing the spirit of Tyrion Lannister. His sarcastic wit, his sharp intelligence, his wounded introspection. His boldness, his bravery. His unusual conjunction of honesty, pragmatism, humour and honour. Perfect. But his face doesn’t fit. Dinklage, even before Game Of Thrones, appeared near the top of People Magazine’s Sexiest Man Alive list in 2003 and 2006. Someone suggested he should be the next James Bond. A quick internet search will bring up legions of admirers. Peter Dinklage has has a rugged, handsome face, and therefore Tyrion, in HBO’s series has a rugged, handsome face. Indeed, Tyrion’s face seems to have been made more handsome by the scar he received at the hands of Ser Mandon Moore, at Cersei’s behest, during the Battle Of the Blackwater.

However, in the real Game Of Thrones, what confronted Tyrion after that battle was no less than devastation. “He turned over the glass, and did not know whether he ought to laugh or cry. The gash was long and crooked, starting a hair under his left eye and ending on the right side of his jaw. Three-quarters of his nose was gone, and a chunk of his lip. Someone had sewn the torn flesh together with catgut, and their clumsy stitches were still in place across the seam of raw, red, half-healed flesh. ‘Pretty,’ he croaked, flinging the glass aside.” (A Clash Of Kings, p.1235)

Why does it matter? In the real Game Of Thrones while some of those that come to know Tyrion respect his intelligence, his blunt honesty, his sense of justice, his slightly dishevelled but mostly intact chivalry, he is perceived by most as a horrible dwarf, an outcast, a freak ugly and more ugly with a butchered, noseless face. In HBO’s version while he is short of stature, his handsome features are given a certain dashing piratical air by a neat romantic battle scar. And thus the reactions of people around Tyrion are distorted, and given completely different connotations.

His father’s anger at Tyrion borders on the psychopathic, as does his sister’s hatred. The common folk’s fear and disrespect of him seems out of proportion. Sansa Stark, when she is betrothed to him, despite the fact that he has protected her from Joffrey, treated her with respect, honour and kindness, while she retains her courtly manners, shows him only fear, pity and disgust. “Look at him, Sansa told herself, look at your husband, at all of him, Septa Mordane said all men are beautiful, find his beauty, try. She stared at the stunted legs, the swollen brutish brow, the green eye and the black one, the raw stump of his nose and crooked pink scar, the coarse tangle of black and gold hair that passed for his beard…This is not right, this is not fair, how have I sinned that the gods would do this to me, how?” (A Storm Of Swords, p.566)

Without his ugly, gruesomely scarred malformed face, Sansa’s horror, her reactions and motivations, seem shallow, and those of others, unjustified.

Perhaps, most importantly, Tyrion’s perception of himself, his moments of self-loathing, his doubts, the very things that engender empathy in the viewer, and that affect and motivate some of Tyrion’s most crucial decisions, without his true face, no longer ring true.

When Master Aemon, at the Wall said at Lord Mormont’s table, before all the high officers of the Night’s Watch,  “Oh, I think Lord Tyrion is quite a large man…I think he is a giant come among us, here at the end of the world.” (A Game Of Thrones, p.367) whose heart didn’t swell, for Tyrion? But without his true face, crooked, ugly, scarred, despite his true face, can he still become that giant? Or is handsome Tyrion, somehow, the lesser man?