On this day, 50 years ago, C.S. Lewis passed into the land of Narnia. He will be honoured with a plaque at Westminster Abbey’s Poet’s Corner this year, a well-deserved tribute. I don’t know many people who grew up without having read The Lion, the Witch and the Wardrobe. The C. S. Lewis: 50 Fans, 50 Years Later Pinterest board has a collection of quotes from authors and other celebrities on what C.S. Lewis has meant to them. The Chronicles of Narnia have been a huge part of my life. I have lost count of how many times I have read them and they are, without a doubt, one of the most beloved children’s book series of all time.

Over the years C.S. Lewis, of course, has not escaped criticism. Philip Pullman’s criticism of Lewis received much media attention and while I am a fan of Philip Pullman I confess I didn’t read much of it. I’m protective of the books I loved as a child, and love now. However he made an interesting comment on The Chronicles of Narnia on his website

Imagine a child reader whose mother happens to be very ill with cancer (and there must be some younger readers in that awful position). Now imagine letting that young reader think that in some mysterious way their mother’s life depends on their being good. Is there anything more wicked that a grown man could say to a child? If your mother dies, it’ll be your fault? But that’s exactly what The Magician’s Nephew says.

While this is a fair point that it is not exactly how I saw it as a child. The heavy Christian symbolism did not elude me entirely, yet I can’t say it influenced me at all. I am sure C.S. Lewis would think that dreadful, but I also grew up with Enid Blyton threatening me with Mr. Pinkwhistle and I was not easily swayed from being naughty.

Over the last couple of years I have been re-reading The Chronicles of Narnia just before Christmas, before I start my yearly Tolkien re-read, and last year I finished the series on Christmas morning with The Last Battle. I don’t often feel like a child “again” when I am reading books, but when I reached the line that “Narnia is no more” I suddenly felt a couple of decades of pent-up rage. I was angry at C.S. Lewis for turning my Narnia to dust. I didn’t care that everyone had “gone to a better place.”

Of course as an adult I notice the Christian symbolism a great deal more. The Last Battle is heavy with it, judgement day and dinosaur bones and paradise. As a child I found it traumatising, without fully understanding the theological aspect, as an adult I find it dreary. I understand why C.S. Lewis felt the need to go there, but I wish he had not.

But all the Christian symbolism in the world could not have dampened my enthusiasm for The Magician’s Nephew. This was partly to do with my childhood obsession with flying horses and an ardent desire to find my own Fledge, but, symbolism aside, the creation of Narnia always fascinated me and I loved Digory and Polly. The reference to Eve in The Magician’s Nephew is especially obvious, to someone of my generation at least, but I wasn’t concerned that Digory would give in to temptation. I fully expected him to return the apple to Aslan. And Digory and Polly would live happily ever after, because Aslan would fix everything. Not as a creator, not as a God, but as a magical talking lion.

Sometimes seeing only what you want to see is not a bad thing. That is the beauty of books. So here’s to Fledge, and to Bree, and to Reepicheep. And here’s to C.S. Lewis, may you never grow old in Narnia. 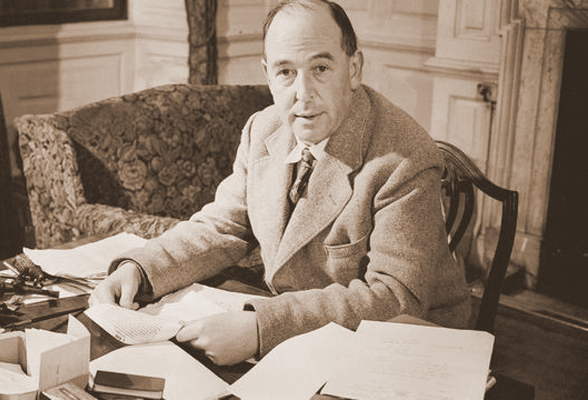 “Some day you will be old enough to start reading fairy tales again.” – C.S. Lewis