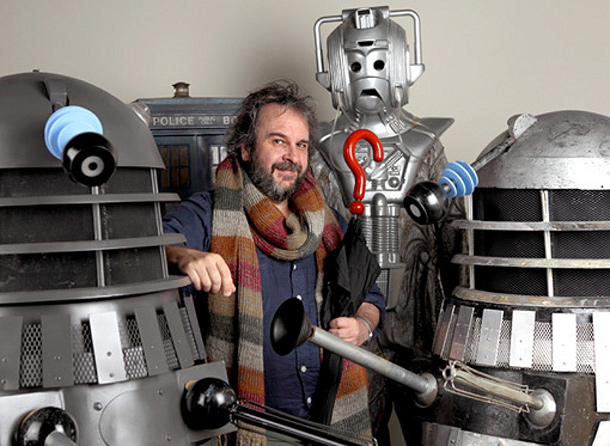 Peter and his Daleks

In our annual update on the rumoured Peter Jackson Doctor Who episode, Steven Moffat has revealed that Peter is still hoping to get on board. Speaking in the latest issue of SFX, Moffat says that Jackson’s ongoing commitments to Middle-earth have held things up.

“He’s still incredibly busy on The Hobbit. I’ve spoken to him face to face, and he would like to do one. He accepts that there’s no money and that there’s no time, and it would have to be when he’s available – and I don’t think he’s even been available enough to answer our emails of late! I think it will probably happen at some point. I mean, he can do what the hell he likes – he owns New Zealand! I think he’s sincere in his Doctor Who fandom, to say the least. He’s a nice guy, he quite often drops me a line after a show goes out. He’s into it – it’s just “Can you make it work?” I think he would also like us to go and make it in New Zealand! And I’m like “Okaaay… I’d rather we just flew you to Cardiff!”

Jackson has previously said that he would wave his directors fee, and would instead settle for a new golden Dalek to go with the two classic Daleks he already owns. He told EW last year “They don’t even have to pay me. But I have got my eye on one of those nice new gold-colored Daleks. They must have a spare one (hint, hint).”

Seventh Doctor Sylvester McCoy joked last year that if Jackson were in charge of the budget “he’s most likely want to film on the moon”.