The Cherry Bluestorms – Delightfully Turning Up A Bad Penny

In an era where constant distraction has reduced attention spans to mere moments and music to a ring tone’s length sound byte of egotistical caterwauling, it’s easy to understand that the very idea of a concept album is something outmoded and anachronistic. Something that probably disappeared with The Beatles and The Who, Pink Floyd and Rick Wakeman. For one thing, it requires sitting down, listening, immersed, because the classic concept albums, indeed the best classic albums, do more than present a collection of songs; unified by an idea, a character, a story, they take you on a journey. Through highs, lows, aural scapes, refrains and denouements, neither the subjects of the song nor the listener are the same by journey’s end.
The Cherry Bluestorm’s Bad Penny Opera, like those classic concept albums, takes you back in time, out of time, to a time when an album was a thing in itself, a narrative, a work of art, an adventure, a mystery, an inner and outer journey, a piece of music in that rich classical sense. Today’s sounds by comparison are all a flimsy soundtrack, a background, drowned out by the pinging of text messages, the inane gaw-gaw chatter of YouTube clips, and the dubious applause of talent show audiences, the ersatz emotions of strained vocal exercises substituting for depth, for connection, aspiring to little more than elevators.

When we think of a concept album, we remember flying pigs and marching hammers, blind messianic pinball prodigies or massive interpretations of classic literature. Profound inner journeys or world shaking mayhem and disaffected youth. But if we go right back to the first concept album that really engaged the notion that an album could be more than a collection of songs, but rather a complete artwork exploring a place, a time, an idea, The Beatles Sergeant Pepper’s Lonely Hearts Club Band, we find something no less grand for it’s exploration of the personal, the poetry of the everyday world, rather than the epic.

In the same way Sergeant Pepper’s takes you into the lives and moments and portraits of a lost Edwardian England filtered through the contemporary eyes of the fictional band, Bad Penny Opera takes you back in time, out of time. There is a sense of flower power California, and swinging 60s London, a sense of nostalgia and longing and exploration that both recalls the 60s and brings that era new, into the present.

The opening track, Bad Penny Overture, engages you with a splashy moog sound stretching between the speakers, twangy distorted guitar riffs that make you feel like Pete Townshend is warming up the crowd, it’s a sound that leaves you expecting something electrifying, and yet an echoey high-hat intones a note of introspection. This is how a journey begins, introspection, expectation, a declaration of time and place. Then the whole thing powers on with some dancing discursive lead guitar, some drama and sustain joins you to the lyrical By Your Leave, followed by A Better Place, both songs about separation as a point of beginning. Deborah Gee’s vocals have the passion of early Grace Slick & Jefferson Airplane, perhaps tempered by melancholy depth like The Pretender‘s Chrissie Hynde. A gorgeous version of Donovan’s Wear Your Love Like Heaven will leave you feeling like basking in spring sunshine and putting flowers in your hair.

On a first listen the album resonates with so much that is familiar, sounds and images, harmonies and echoes, without ever falling into parody, pure wonderfully crafted 60s melodic pop. Unlike say Oasis, where pastiche and parody of a 60s vibe merged with 90s big rock orchestra so you coudn’t tell if the Gallaghers were serious or taking the mickey, there’s something incredibly authentic about The Cherry Bluestorms sound, and also something raw in their story telling. As if time reversed somehow and gorgeously hopeful mind-expanding 60s pop evolved out of 80s indie and 70s punk. Which sort of makes sense because both of those branches on the tree of music represent a devolution. How can music devolve through indie and punk to create a fresh authentic 60s sound? It’s music, it can do almost anything.

So what exactly is Bad Penny about? I still don’t know. I have a vague impression of the character Penny hoboing around northern California, escaping a messy relationship, ending up in England in the same kind of state. Finding trouble, discovering resolution, a sense of exploration, learning, overcoming, evoked by those hopeful 60s harmonies. You can explore the Cherry Bluestorm’s thoughts in more detail here. The point is, it doesn’t really matter. We each bring our own experience and what calls out with aching significance to one listener, is perhaps not so demanding to another. A concept album doesn’t have to be a unified narrative like Pink Floyd’s The Wall, or The Who’s Tommy, I still don’t know what exactly Sergeant Pepper’s is about, or Nick Cave’s Henry’s Dream, they are very different, but both evoke images and ideas and senses that immerse you in a time, a place, characters, a story. That’s what Bad Penny does.

Sometimes it seems the muzak has won. And when it seems like that, the answer is to switch off (all the distracting gizmos) turn on, tune in and turn up. Because Bad Penny Opera is an album that, hearing, takes you to another person and another place, like encountering an old friend returned after a long and exotic journey, comfortably new and excitingly familiar, and a pleasure to listen to again and again.

The Cherry Bluestorms are Glen Laughlin, Deborah Gee and Mark Francis White. If you’re lucky you’ll find them gigging around the west coast of the USA and places further afield. They are also working on producing their latest single See No Evil on vinyl, and I can’t wait to hear Dear Prudence on the B side. 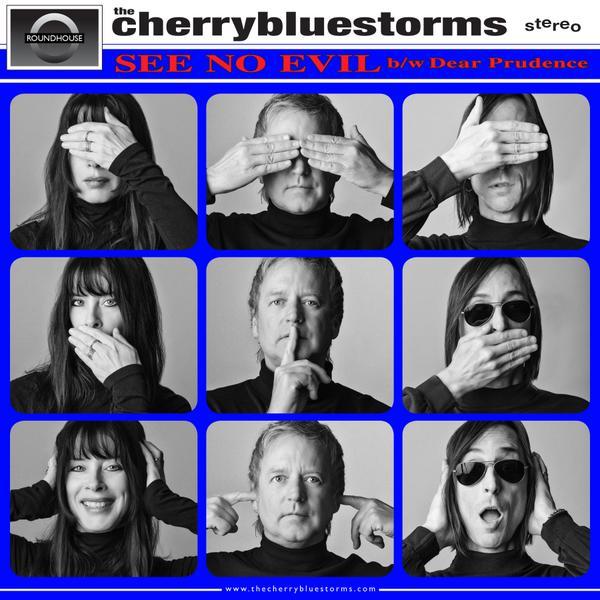