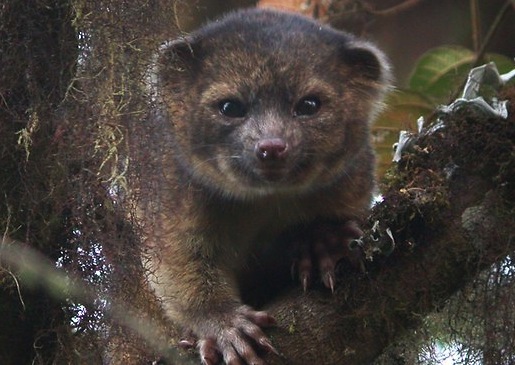 The Olinguito, a cute racoon or possum-like creature with dusky orange fur has been declared a new species more than 100 years after it was first discovered in the Ecuadorian rain forests.

The animal had previously been mis-identified as part of the obscure Olingo family, though for many years scientist in zoos around the world had been at a loss to explain the failure of attempts to breed the creatures.

Often described as a cross between a cat and a bear, the true identity of the cute but carnivorous tree dweller was only discovered when Kristofer Helgen, mammal expert at the Smithsonian’s National Museum of Natural History, was examining preserved specimens and skulls of mammals at the Field Museum in Chicago.

“I pulled out a drawer and there were these brilliant, beautiful orange-red pelts with long flowing fur. It was nothing like olingo fur. I then looked at the skulls and the shape was very different. I wondered, ‘is this a mammal that’s been missed by every other zoologist?’ It turns out that it was,” Helgen said. “If you saw the two animals side by side you would wonder how they could ever be confused.”

The Olinguito, although sharing a superficial similarity to the Olingo, was actually different in almost every measurement. It was smaller, furrier, had a shorter tail and different teeth.

Certain they had a new species Helgen’s team set out on an expedition into the high cloud forests of the Ecuadorian Andes.

Trekking through the forest, they eventually spotted the creature in their torches, leaping form tree to tree in its native habitat. They took DNA samples from specimens in local Ecuadorian zoos. Back at the Smithsonian, tests confirmed their discovery; the first new carnivore discovered in the Western Hemisphere in over 35 years. Although a member of the Order Carnivora, and technically omnivorous, the Olinguito lives mostly on fruit. Olinguito means of course ‘little Olingo’, the Olinguito’s new, formal scientific name, is Bassaricyon neblina, ascribed in the article on their discovery in the scientific journal ZooKeys by the Smithsonian team. Neblina means both ‘mist’ in a reference to the Olinguito’s fog-shrouded forest home, and obscured or hidden, an apt reference to the long hidden mystery of its true species.