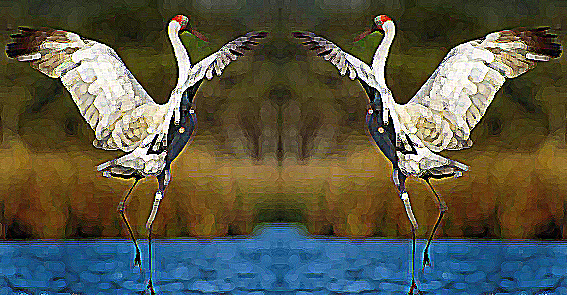 How The Brolga Got Her Dance

In the dreaming, which some might tell you is long, long ago, and others that it is just a few quick steps over there, Gurook danced every evening among the fronds and arbours by the banks of the billabong. The other children sat on the bank clapping time, and the elders also clapped and sang songs to share little Gurook’s elegant and marvelous dances.

On one bright afternoon as little Gurook turned and kicked up sprays of water at the edge of the creek, a whirlwind blew out of the bush, and the bad spirit, Nillin sprung out of the willy-willy.

“I have seen her lively dancing, and I will dance with her, and marry little Gurook,” Nillin declared to the elders. He bowed and began a courtship dance, but the elders said, “You are a bad spirit, you cannot marry our little Gurook.”

Nillin grew furious, crying, “If I cannot marry Gurook, no one can,” and in a whirl of dust took Gurook’s hand and drew her into the willy-willy, which blew into the air and vanished.

The people cried and searched for Gurook, along the trilling creek, on the quiet banks of the billabong, in the shadowed forest and at the edge of the desert where the red whirlwinds haunted.

The elders gathered where one creek became many, spreading in silver over the land, and they sang a great song to call Nillin out of the dry lands. A furious willy-willy blew across the bush, and when the elders rubbed the dust from their eyes, a large and elegant bird danced out of the vanishing whirlwind. The elders raised a cry in wonder, and clapped their hands and stomped their feet, and the bird bowed and danced. The more the people sang and clapped, the more the bird stepped and raised its wings and danced, and the people saw that though jealous Nillin had turned little Gurook into the Brolga, she had come back to them, to share and teach her graceful dances.

(Loosely retold from the traditional Wurundjeri story of Gurook & The Brolga).

The Brolga is a tall, slender bird of the crane family, with stilt-like legs, a long neck and a large beak. Adults can grow to almost 4.5 foot tall (1.3 metres). Their plumage is grey with black wing tips, with an orange or red band on the head. After performing an intricate courtship dance, with graceful steps, elegant wing flaps, bows and a loud trumpeting, brolgas will become paired and remain together for most of their 30 year lifespan. In the mating season the pair return to their preferred wetland territory, which they defend from others. Outside of the breeding season they stay in couples or small family groups of three or four, but gather in larger flocks comprised of many such small families.

While not endangered, they are seen less in the southern states of Australia, where many wetland habitats have been drained and cleared for agriculture.

In Victoria you can see Brolgas and many other amazing native animals at the Healesville Wildlife Sanctuary, an hour or so north of Melbourne. One of the highlights, (amongst many) is the native bird display, where you can see the magnificent Wedged-Tail Eagle, the swift Black Kite and the clever Cockatoo.

Many of our native birds are endangered, thousands of old growth native forest trees are pulped for paper products every year, and for many rare bird species, the old forests and old hollow logs are the only place they will nest to breed. The one thing you can do to help is switch to 100% recycled toilet paper, because many of us are simply flushing our native habitats down the loo. Check out information on the Zoos Australia Wipe For Wildlife program. If you are lucky enough to see the spectacular native bird presentation, you can text snaps of the amazing creatures directly to the number in the picture below to pledge your commitment to 100% recycled. If you can’t make it to Healesville, you can text to show your commitment anyway, because their is no good reason to flush away the habitats of our native birds and animals.