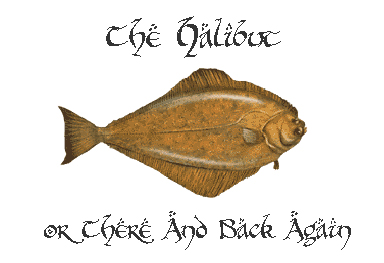 In a hole under the sea there lived a Halibut. Not a pleasant, dry hole with windows and a larder, no. A nasty, dirty, wet hole, filled with the ends of worms and an oozy smell. This was quite an ordinary Halibut. Quite flat, and with a tendency to swim sideways. This particular Halibut was from the genus Hippoglossus, from the Greek meaning Horse and Tongue. Although they can talk to horses, Halibut’s seldom do, living on the bottom of the ocean where horses rarely pass. However, if a horse by chance does pass along, they will certainly engage it in conversation, before eating it.

The name Halibut is actually derived from Haly, meaning Holy, and Butt, meaning Flatfish, as it is a favourite of Catholics on Holy Days. A horse falls into the ocean, fish eat the horse, we eat the fish. Ah, the circle life. Our particular Halibut was named Belowberbert, but he was mostly called Herbert for short. His particular family were the Right-Eye Flounders called by the men of the south in olden days Pleuronectidae, because when swimming flatly along the seabed they swam with their good eye, ever watchful, up. So his full title, on a plaque on the door of his muddy, nasty, worm-endy hole (which was just the way he liked it, if you please!) was Belowberbert Right-Eye Flounder of Halibutton.

Now Herbert, at five foot long and two hundred and eleventy pounds, quite a normal middling size, was a most respectable Halibut, and never did anything unexpected, except swimming sideways when he was young, and then flatways as he grew older. Also the eye on what became his flatways underside, as he matured, moved to his top side. This seems a little unusual to us, however for a Halibut for his side to become his belly and his other side to become his top, whereon his undereye had migrated too, was all perfectly normal.

He enjoyed nothing more than a good meal of almost any other creature he could fit in his not inconsiderable mouth. Each year he would migrate, generally in a clockwise direction, from north to south, and back again. In the next fifty years Herbert expected to grow at least to around nine foot long, and nearly as wide. It was not to be. In what become known as the Frying of The Shire, most of Halibutton was netted by a Norwegian fishing trawler. Herbert’s extended family were par-boiled, sprinkled with spices or crumbs, snap frozen, and are now appearing in cardboard boxes in a supermarket frozen foods aisle near you.

Herbert escaped this grisly fate, but only for a short while. Unfortunately he was captured by a small family of Eskimos. “Thank goodness!” Said the Eskimos, laughing, who baked, fried and souped him, living on his tasty flesh for at least a week. After dinner, they passed around the tobacco jar.

And here is a recipe for his crunchy balls. 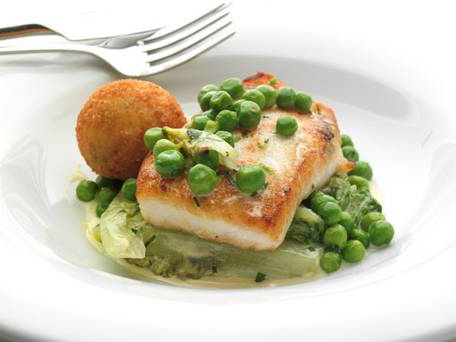 1 Small Head of Cos Lettuce

Determinedly sweat chopped shallots and garlic until soft, add cream and reduce by half; add lettuce leaves and peas and return to the boil.

Loyally roast halibut in a pan for 5-6 minutes, place in bowl with Herbert’s deep-fried smoked Halibut Balls, under-garnish with peas and lettuce.

Serves four, or only one if your guest is of the Dwarfish race.