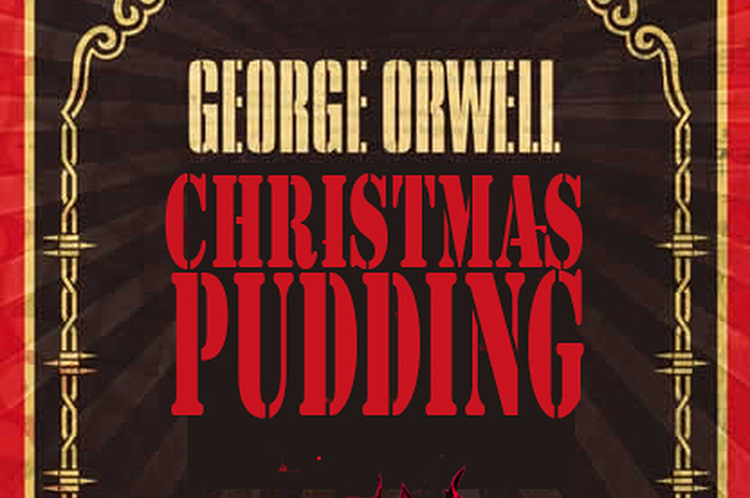 When Voltaire made his often-quoted statement that the country of Britain has “a hundred religions and only one sauce”, he was saying something which was untrue and which is equally untrue today, but which might still be echoed in good faith by a foreign visitor who made only a brief stay and drew his impressions from hotels and restaurants.

So begins George Orwell’s 1946 essay defending English Cookery. Quite a challenge while wartime rationing continued, restricting most of Britain to a limited selection of bland staples. Orwell’s most famous work depicts a society in which such regiment and ration have become the grindingly dreadful norm, a state of austerity imposed as part of a regime of control by an invasive totalitarian state. Nothing at all like the Britain of today, where most of the cuisine is apparently corporate fastfood chains, curried jubbly (whatever that is, Mr Oliver), or at its dizzying heights a chemical reaction involving liquid nitrogen, crushed cochineal beetles and being gently slapped with a live octopus (thanks Heston Blumenthal).

Orwell goes on to say that British cuisine is perhaps best studied in the homes of the great mass of working and middle class people; that in the upper classes and fine establishments it is more often French or an imitation thereof. Voltaire’s oft repeated criticism, In England there are sixty different religions and only one sauce, is perhaps a critique of English hostelry, and a tendency toward credulity in thought, rather than English food, per se.

The characteristic British diet is a simple, rather heavy, perhaps slightly barbarous diet, drawing much of its virtue from the excellence of the local materials, and with its main emphasis on sugar and animal fats…In general, British people prefer sweet things to spicy things, and they combine sugar with meat in a way that is seldom seen elsewhere.

Winston Smith and the other downtrodden denizens of Airstrip One would of course have loved such simple offerings, in a world where the authorities would drop the monthly chocolate ration from 30 grams to 20 grams, then announce to great patriotic cheering that it had increased from 15 to 20 grams, they would have indeed been in a fervour. They would have also loved Orwell’s recipe for Christmas Pudding, though Christmas no longer existed, and what passed for pudding was no reason for cheer.

[pullquote]If you want to keep a Christmas Pudding, you must also hide it from yourself.[/pullquote]

The war weary citizens of Britain at the end of WWII would have also have found much joy in George Orwell’s British Cookery, his Christmas Pudding and accompanying recipes, with which he sought to disprove the common held beliefs about British cuisine. Commissioned by the British Council, a kind of promotional office for all things British in foreign lands, whose remit also included re-educating the post-war influx of foreign visitors, (and reputedly an innocuous cover for many Secret Intelligence Service operations) the essay and recipes remained unpublished. Given that many of the ingredients were still unavailable, to publish it for the edification of immigrants and refugees may have been a little like the promise to increase the chocolate ration in 1984.

It’s a fascinating curiosity, how an educational, a promotional, indeed a propaganda piece on the quality of food in a time of extreme rationing, a look at luxury in a time of austerity, embodied and may have been in part the genesis of Orwell’s seminal exploration of truth, power, the economics of warfare and government by lies. Given the imposed austerity, the refugee crisis, Brexit, the candidacy of Clinton, the election of Trump, the madness of Syria, the waste, wars and deceptions of current governments around the world, at Christmas when we dollop some custard and pour on some brandy, and watch the invisible dancing blue flames, spare a moment to remember the deeper meaning of George Orwell’s Christmas Pudding:

Method. Wash the fruit. Chop the suet, shred and chop the peel, stone and chop the raisins, blanch and chop the almonds. Prepare the breadcrumbs. Sift the spices and salt into the flour. Mix all the dry ingredients into a basin. Heat the eggs, mix them with the lemon juice and the other liquids. Add to the dry ingredients and stir well. If the mixture is too stiff, add a little more milk. Allow the mixture to stand for a few hours in a covered basin. Then mix well again and place in well-greased basins of about 8 inches diameter. Cover with rounds of greased paper. Then tie the tops of the basins over the floured cloths if the puddings are to be boiled, or with thick greased paper if they are to be steamed. Boil or steam for 5 or 6 hours. On the day when the pudding is to be eaten, re-heat it by steaming it for 3 hours. When serving, pour a large spoonful of warm brandy over it and set fire to it.

In Britain it is usual to mix into each pudding one or two small coins, tiny china dolls or silver charms which are supposed to bring luck.

[pullquote]If you want a vision of the future, imagine a boot stamping on a Christmas Pudding – forever.[/pullquote]