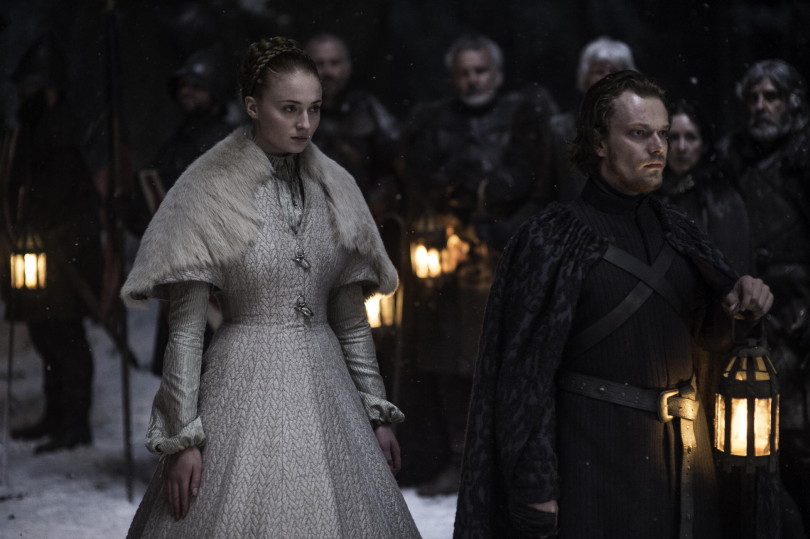 The Real Game of Thrones: Ramsay and Reek’s Wedding Night

The same sort of explosion that followed Unbowed, Unbent, Unbroken also followed last year’s episode Breaker of Chains, but on a slightly less riotous scale. Many fans and critics were angry at the rape of Cersei Lannister by her brother and lover Jaime, for a variety of reasons (and we have already discussed this at length). The rape scene in Breaker of Chains was completely unanticipated. Anyone who had read the books would have been expecting Cersei and Jaime to have consensual sex in that scene, as depicted in the book. So both book fans and television fans could not have seen that one coming. But with Sansa Stark and her new invented storyline, that Ramsay would brutalise her after they were married was fairly obvious and no one should really have been surprised. It’s curious that this is the rape scene that has broken the camel’s back. Was there this much outrage when the young Emilia Clarke was repeatedly raped on-screen? Or the offensive scenes at Craster’s Keep last year? Not quite so much.

Now I say that we should have been expecting it to happen with the confident air of someone who has spent the last couple of weeks saying “They wouldn’t! They’re not going to. They can’t be that stupid.” (aloud, no less). Which is a good lesson in investing too much faith in humanity. The real problems began in season 4, when Dan and Dave begun to stray further and further from the source material. Game of Thrones has always had plenty of sexist, homophobic and exploitative garbage in it. But woven through George R.R. Martin’s fantastic storytelling, it was somewhat easier to endure. Now the training wheels are off, Dan and Dave are heady with the knowledge of the ending, and are greedily destroying 20 years of work in the last three seasons of unadulterated fan fiction.

The preceding rant is necessary, as Dan and Dave’s complete lack of ability to understand subtlety or employ any sort of complexity is what led to the idea that that Theon being present, and focalising, this incident, should have had something to do with the male gaze. We know that the rape scene was unnecessary and will do nothing to develop Sansa’s character. Worse still, the rape was really written as a ‘consequence’ of Sansa’s developing maturity and her decision to lay down with the devil. We already know there’ll be no proper exploration of the aftermath, but it’s obvious Sansa and Theon will forge some sort of bond as mutual victims of Ramsay’s abuse.  Sansa is replacing another character in the original book scene, and there are, of course, huge problems when you stray that far from the canon. Yet again, Dan and Dave are presenting a rape scene as a boorish, exploitative plot-device and using the trope of arranged medieval marriages resulting in wedding night rape. They’ve done it before with Daenerys and Drogo. We can hardly expect Ramsay to come off as a romantic hero – or Dan and Dave to be clever enough to pull that off. 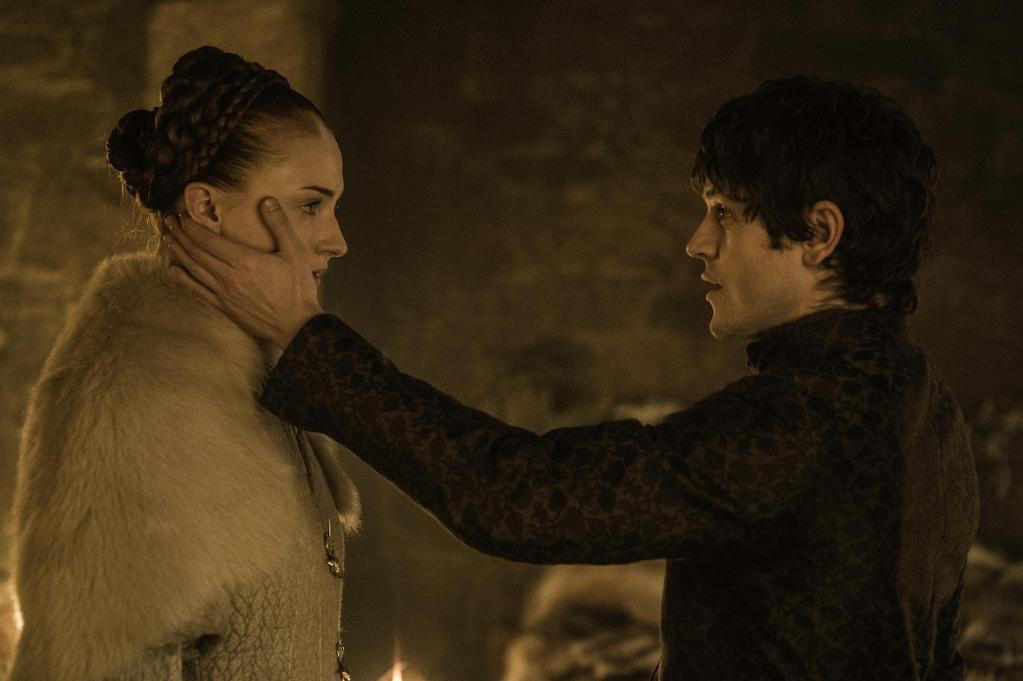 We can be sure producers thought it best to focus on Theon during the actual act of rape as seeing the young Sophie Turner brutalised on-screen would have outraged fans further. It also is probably going to serve as a ‘last straw’, to snap him out of ‘Reek mode’ and agree to help Sansa escape Winterfell (Dan and Dave being completely predictable). In a way it shadows what Theon went through in the book. Theon is still a victim of abuse, and being forced to see Sansa being raped is a further abuse of both of them. Neither scene, television or novel, were about the male gaze. They were about two victims of abuse. George’s original version is even grimmer.

The young woman who was actually forced to marry Ramsay in the book was Sansa’s best friend, Jeyne Poole. Jeyne was a war trophy, her father was killed when Eddard’s household was wiped out in King’s Landing and Jeyne was held captive by the Lannisters until she was shipped off north, forced to pose as Arya Stark and marry Ramsay. Jeyne is essentially a victim of war rape, repeatedly brutalised and sexually assaulted by Ramsay. On their wedding night it is not only Jeyne suffers. Ramsay also sexually abuses Theon, forcing him to perform a sex act on Jeyne. This is probably the first time Ramsay sexually abuses Theon and marks something of a terrible new ‘stage’ in their relationship.

One of the problems with the screen version of Ramsay is that he is too handsome, and interested in prolonged sexual relationships with women. The original version is neither. There is no attractive but sexually depraved kennel-girl who obsesses over Ramsay. Ramsay is not interested in pursuing attachments with anyone other than Reek.

The first Reek was given to Ramsay as a servant. He was given the name for his unnatural stench. Reek bathed three times a day and wore flowers in his hair, but the stench endured. A maester diagnosed the stench as the result of some sickness, but Reek was otherwise healthy. He once drank perfume to cure his sickness, and almost died. No one in the Dreadfort could stand to be near him so he slept in a sty with the pigs. When Ramsay’s mother came to the Dreadfort and asked for a servant to help her raise him, Roose gave her Reek as a jest. However, Ramsay and Reek became inseparable. What has yet to be made clear was who the leader was in Ramsay and Reek’s formative years. Roose Bolton would later tell Theon/Reek ‘I do wonder, though … was it Ramsay who corrupted Reek, or Reek Ramsay?’

We have seen something of Ramsay’s “hunts” on screen.  Ramsay would hunt women with Reek, and after Ramsay had raped and killed them,  Reek would indulge in necrophilia. This strengthened the unnatural bond between them. But when Ramsay tricks Reek into posing as him so Ramsay can escape, and Reek is killed, it is hard to gauge how Ramsay felt about it. Or why he would throw his companion to the wolves. 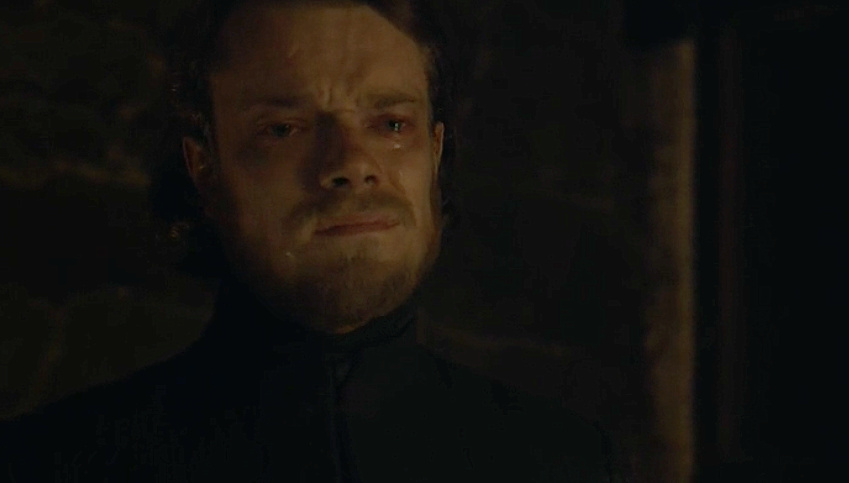 After Ramsay captured Theon, he destroyed him physically and emotionally, piece by piece, until Theon was no longer himself. Ramsay could then recreate him as his childhood companion. But Ramsay broke Theon physically as well as mentally. Theon/Reek could never hunt women with Ramsay, or rape them, he had neither the strength and if he had not been physically emasculated, he was certainly emotionally emasculated. One might speculate Ramsay repeatedly abuses Theon because he is not Reek. It is certain wants to keep Theon in his power. But that may well be out of an obsessive love for him, rather than just control.

Ramsay and Jeyne Poole’s wedding night was not just about the two of them. Whether Ramsay even felt satisfied with his repeated abuse of Jeyne is unclear, he gets far more pleasure, arguably both emotional and sexual, from abusing Theon. He is more possessive of Theon than he is his wife, he is able to show Theon real affection when he has a mind to. The sexual abuse of Theon may have been the last step towards Ramsay’s perfect relationship.