Death Shall Have No Dominion: What Remains of Richard III

Killed by the sword but murdered by the pen, this is the story of a King who lost more than his crown. Father, brother, husband, son and King – was he more than the villain we have come to know?

‘The evil that men do lives after them, the good is oft interred with their bones’ Shakespeare

Many other English monarchs have faded into obscurity over the centuries. William Shakespeare immortalised a villain in The Tragedy of Richard III. Yet the iconic play has kept Richard’s memory alive, long enough for people to question the notorious accusations against him. The real tragedy is when everyone forgets. And what could be more appropriate than using the same medium to re-asses his reputation?

InterAct Wales will make their Edinburgh debut this year with Death Shall Have No Dominion, a two part production exploring the fragility of reputation. Part One ‘What Remains of Richard‘ directed by Vivien Devereux examines the accusations of villainy against King Richard III, while Part Two ‘Mametz‘ looks at the accusations of cowardice levelled against the Welsh soldiers of the 38th division at the battle of Mametz Wood in the Somme 1916. Mametz is written written by Lyon Devereux.

Director Vivien Devereux told us about the not-for-profit theatre group based in North Wales “InterAct (Wales) was set up as a Youth Drama Group 15 years ago as a collaborative devising group – we found our approach especially suited young people with dyslexia who were disadvantaged in most theatre groups because they equated poor reading skills with acting ability! We specialise in historically based productions – Children of the Holocaust, Welsh legends, local history – issue based theatre – social exclusion and integration – and site specific theatre. Our members have scattered all over the UK and Europe to train at Drama schools and to work in the industry but this year many of them have returned to Wales to prepare for this production – 70% of this cast have been with us from the very start.”

Founder of the Looking for Richard project Philippa Langley has lent her support for the production ‘I think what you and the team are doing is incredibly brave, and also very powerful. By pushing the boundaries of art (and through it history) you will be making people question established dogmas, and questioning is all we ask‘.

How You Can Support Death Shall Have No Dominion

The self-funded company is trying to raise £2000 to cover production and promotion costs as well as travel and accommodation for the month-long stay in Edinburgh. You can donate through their Kickstarter Campaign, which comes with the usual perks. The lowest level donation gets you a copy of the original soundtrack, £100 gets you four reserved seats for the play and a meet and greet with the cast, and the top-level donations get you a personal performance of InterAct’s popular Murder Mysteries.

You can find out more on their website: InterAct Wales

And dig into those pockets and pledge at: Kickstarter 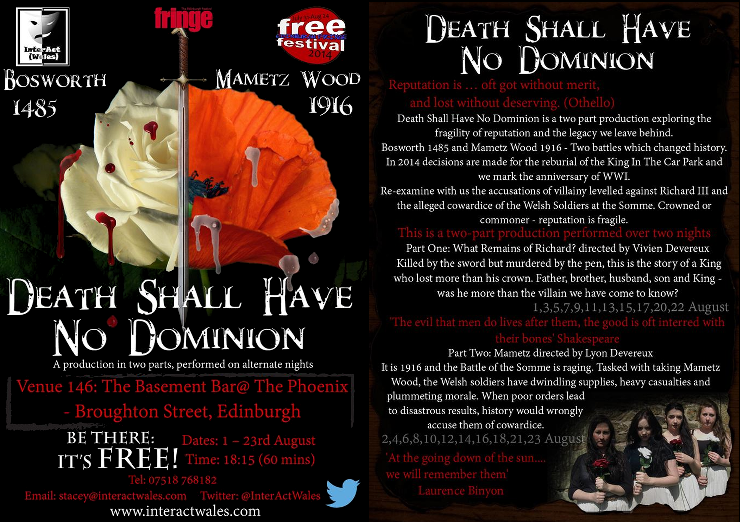