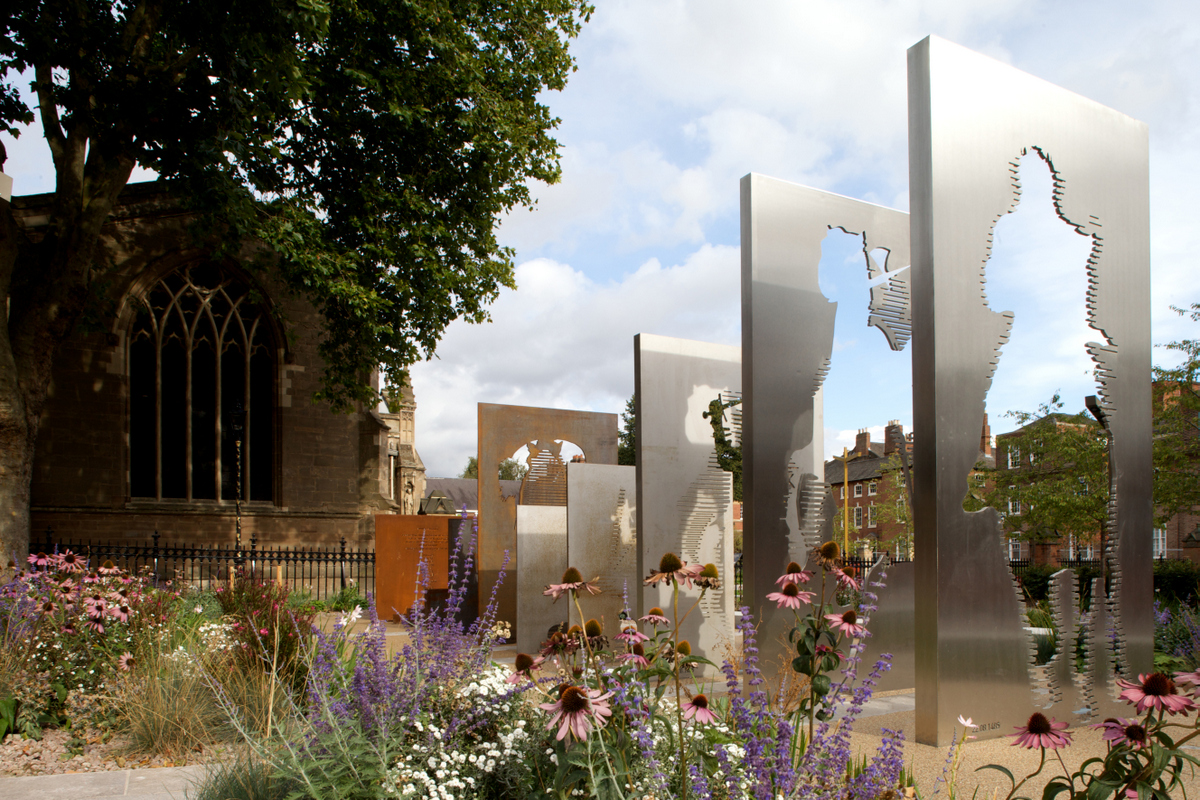 Towards Stillness: Towards the Final Journey of King Richard III

When the Leicestershire County Council commissioned Towards Stillness, Dallas Pierce Quintero was asked to create an artwork that connected Bosworth, where King Richard III died in battle, to the city of Leicester, where he was buried and rediscovered. Towards Stillness would express the moments before, during and after the final journey of King Richard III from Bosworth to Leicester.

Juliet Quintero, director of Dallas Pierce Quintero, said: “Our aim with this piece is to express the events surrounding the death of King Richard III, focussing on key moments and using the space of the silhouette as a canvas for the viewer’s imagination.”

Richard III’s last days are depicted as life-size silhouettes cut out of twelve vertical steel plates, based as closely as possible on historical accounts and records. The studio, working with students from Loughborough University School of Arts, engaged an historical re-enactor to model for them.

The steel plates are designed to be read at a human scale and enable visitors to reflect on King Richard III and re-imagine the different stages of his journey. 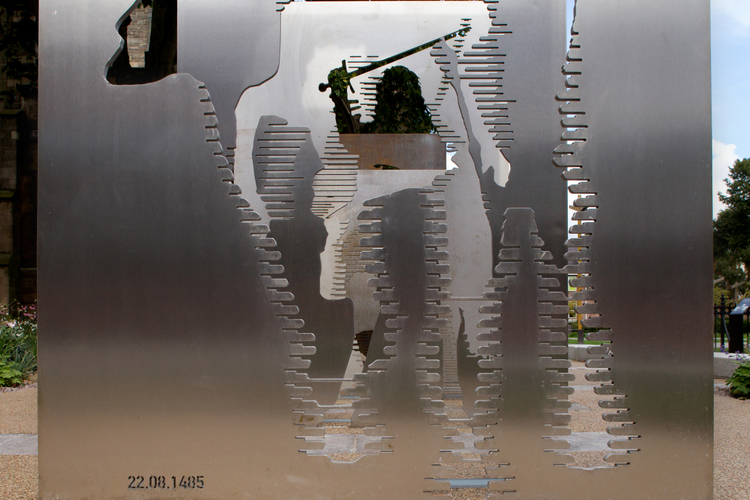 The rise and fall in scale of the steel plates represent the different stages of Richard III’s journey. The first plates depict King Richard III charging at Henry Tudor in polished stainless steel – graduating to a brushed steel, a mill finished steel, two increasingly distressed steel plates, to the last plates of corten steel with varying degrees of rust. The final plate rises above the five that precede it – illustrating the discovery of Richard III’s grave and pointing towards his final resting place in Leicester Cathedral.

Towards Stillness is also intended to be understood in the context of the buildings around it, the landscaping reflecting the terrain of a battlefield.”Now that its in situ, it is very evocative to observe the play of light and shade on the sculpture, highlighting the variation of texture from the reflective to the rich earthy tones of the corten, and picking up the colours of the Cathedral and the newly landscaped surroundings,” added Juliet. 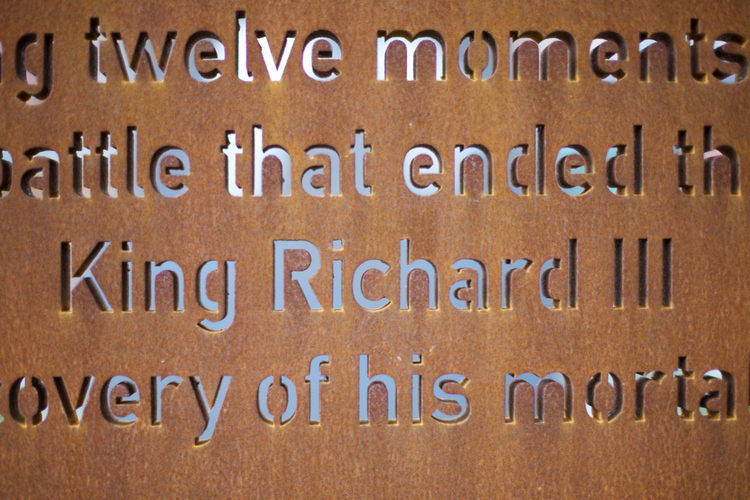 The final plate features a list of words that describe each of the moments expressed by the individual panels.

Richard III had already gained immortality when he fell defending his crown in battle; the sort of heroic death celebrated by storytellers for as long as can be remembered. Much of the modern historical art we see embraces that warrior image, Richard III on the battlefield, on horseback, in his armour, rising out of the chaos and violence of the battlefield. Other sculptures we’ve seen, such as James Walter Butler’s, capture the image of kingship. It’s the same thing we see encompassed in the earliest copies of portraits that survive, the image of monarchy, of majesty and strength. What medieval portraits of monarchs tend not to capture is the human spirit. They are heavy in symbolism, reflecting on the public image.

So how does one capture human frailty when using industrial materials? There’s been some controversy over this sculpture, that the use of modern materials isn’t a fitting representation of a medieval king. Yet there is already a beautiful bronze that accompanies Towards Stillness in the gardens. Mawkish neo-classical representations displayed elsewhere have been far from satisfying. Towards Stillness tells a different story. By incorporating the historical concept of story-telling in panels with inspiration drawn from the stop-motion photographs of Eadweard Muybridge, it combines traditional and modern, creating a life-sized, three dimensional sensory experience for the visitor. How the visitor connects with the artwork is certainly personal, some people may walk right by it. Others may stop in front of the first panel and look through the series of plates, they may be tempted to walk through them and try to reflect on the journey of King Richard III.

In a philosophical sense the name Towards Stillness encompasses the sort of inner tranquility that is a desire inherent to humans. And hard to achieve. But it is the final plate that encompasses the most important part of Richard III’s journey. Remembered, lost, sought and found. What we used to consider were Richard’s last days were far from it. What Towards Stillness captures is all of Richard III’s story. And that story now includes the amazing effort that was put into finding a lost king, and remembering King Richard III. 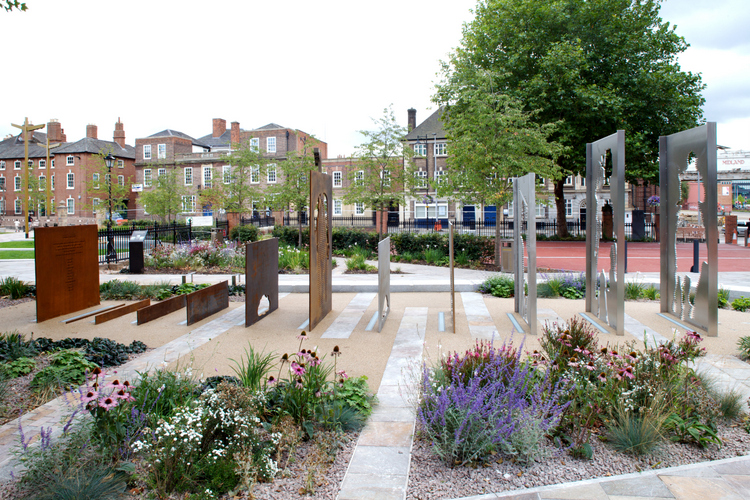 Founded in 2009 by Jonathan Dallas, David Pierce and Juliet Quintero, Dallas Pierce Quintero is an art and architecture studio based in London. The studio works at a broad range of scales – from furniture, public art, architecture and consultation to the public realm. Its work is highly site-specific, exploring places, spaces and engaging the people that inhabit them through continuous open dialogue, ensuring meaningful and relevant experiences. Making and materials are also at the heart of the studio’s projects, which along with its iterative approach to design, produces both beautiful and unexpected results.