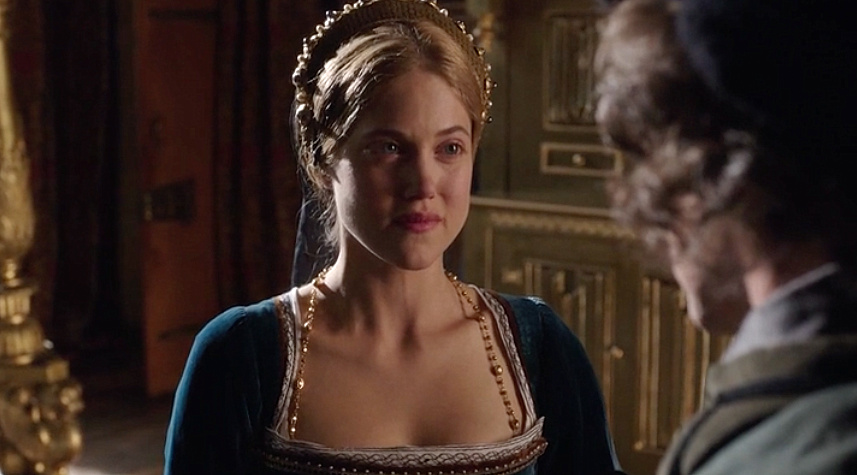 The Dullards of Wolf Hall

You think candlelight is problematic? I like the candlelight, it’s Wolf Hall’s most redeeming quality, along with the gorgeous music. The only thing more unbelievable than a gently-raised lady scampering over to a strange lawyer to reveal her sister’s sexual secrets is Mary Boleyn proposing to Thomas Cromwell while lustfully stroking his grey velvet. It’s only slightly more perplexing than this week’s kitten-loving chick-magnet Cromwell. With only a handful of women appearing in this week’s episode literally half the cast threw themselves at him. While the scene between Mary and Cromwell in the book filled me with a sort of horrified amusement, seeing it on screen this week was somewhat bizarre. And Mary’s tearful plea that she wanted a husband who wouldn’t die is even more baffling, considering Cromwell was about fifty years old. 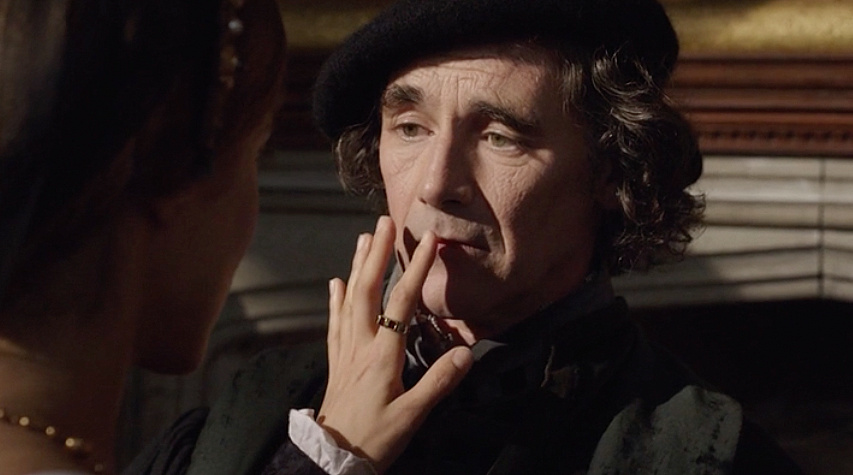 ‘Are you short of money?’
‘Oh, yes!’ she says. ‘Yes, yes, yes, and no one has even thought about that! No one has even asked me that before. I have children. You know that.’ – Thomas Cromwell and Mary Boleyn – Wolf Hall

Before you shed too many tears for Mary, by 1536 she was receiving both a £100 pension from the crown 1 and 100 marks from the Priory of Tynemouth, roughly £80,000 in todays worth. Which makes her both better off than me and probably able to afford velvet. The annuity from Tynemouth has been speculated as a round-about way of Henry VIII paying an annuity for his illegitimate daughter, Catherine Carey, Mary Boleyn’s first child. The annuity apparently continued to be paid after the Prior Thomas Gardiner, who granted it to her, had moved on in 1536, despite the next prior trying to get out of it. 2 Her son, young Henry Carey, kept his inheritance intact via his aunt Anne Boleyn.3 Although this has been deliberately misinterpreted by Gregory and Mantel to make Anne an inheritance-thieving and son-snatching villain, Mary’s husband William Carey’s lands had reverted to the crown. His son’s wardship could have been granted to any of Henry’s favourites, and it is both unusual and fortunate it was granted to Anne. Anne made sure her nephew received an excellent education, and her sister Mary had both a good annuity and a position at court which saw her food and lodgings and probably clothing taken care of.

Anne probably would have given Mary better dresses, as Charity Wakefield looks like an extra from Reign. But I am still a bit mystified about Claire Foy’s bizarrely ill-fitting bodices. Still, they make for a distraction when her screechy, horrible Anne fills the screen. Foy, who having played both Little Dorrit and Adora Belle Dearheart is usually received with much enthusiasm in my household, is painfully boring.  In a departure from the nostril-flaring and flouncing Anne Boleyn of Hirst’s The Tudors, Foy is all throne-lolling, eyebrow-raising, spitty-cat and French-only-on-occassion when she wants to insult Cromwell. Henry wouldn’t have looked twice at such a shrew.

Cromwell is almost completely surrounded by dimwits, ninnys and dunderheads, and when a character’s intelligence seems somewhat intact, they are instead painfully awkward. I wasn’t expecting Charles Brandon, Duke of Suffolk, to get a good rap in the BBC adaptation, but Richard Dillane has so mastered Mantel’s version of Suffolk that he seems to surprise himself every time he delivers a line, looking suitably perplexed in the aftermath. Bernard Hill’s Duke of Norfolk plays it close to Mantel’s thuggish interpretation. But I am still trying to wrestle with the idea of a thin Cromwell, Wolsey and Brandon and a somewhat hefty Norfolk. And Damian Lewis’s head looks alarmingly small bobbing about between his enormous shoulder pads and awkwardly-perched bonnet. Henry himself had a bull-neck even when he was slimmer and pulled off the garb with more aplomb. Still, Lewis is being both attractively-brooding and red-haired enough to be hailed the greatest Henry VIII to ever grace our screens. Now a whole new generation of women can sigh over the wife-murdering, monk-torturing, abbey-plundering varlet. 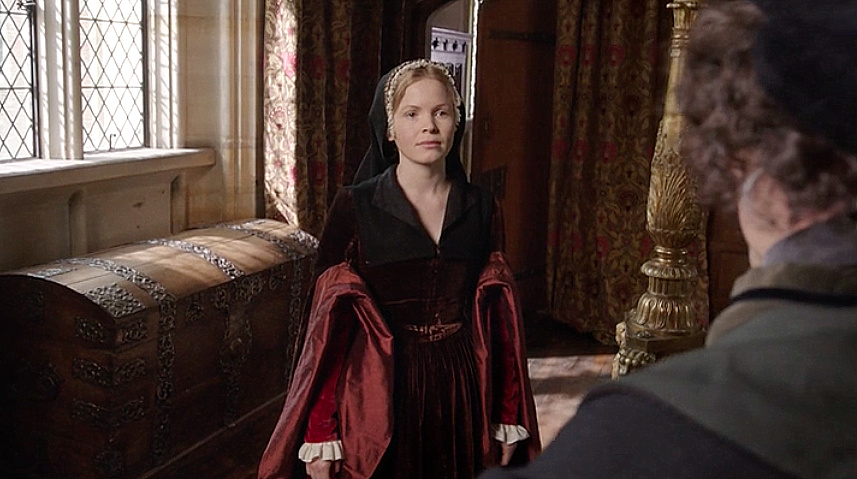 Then we have Mantel’s poor, stupid Jane Seymour, who in reality may have been a little poor, but was certainly not stupid. Kate Phillips was introduced as the “sickly milk-faced creeper” who “cries if you look at her sideways” and who apparently can’t do much of anything. Raised in a family of courtiers and having served Katherine of Aragon, apparently Jane needs to be coaxed through how to conduct a conversation while Thomas Cranmer (who appears to have the beginnings of stupid) laughs at her. Charming.

Then there is the famous play where Cardinal Wolsey is dragged to hell, which must be an absolute delight for film-makers, with plenty of fodder for a visual feast. Only the grudgingly-admiring Henry VIII wasn’t actually there, and Cromwell’s “players” didn’t actually perform in the play, just to rain some boring facts on your parade.4 Of course the powerful scene of the men unmasking instilled a fury in the heart of a now-vengeful Thomas Cromwell. The scene could have been improved by him stroking allegedly mean-to-his-allegedly-drunken-wife Thomas More’s bunny, or maybe the return of Marlinspike. Then again, let’s hope Marlinspike’s scene only needed one take, the poor kitten was terrified (you mean rotters). 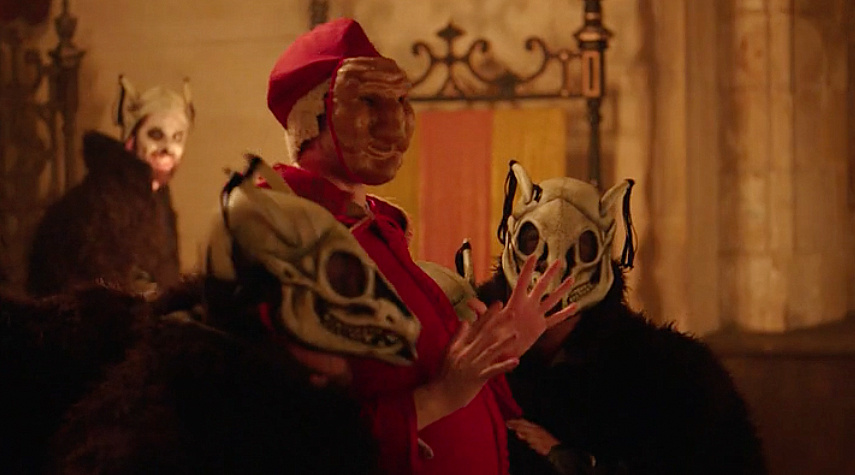