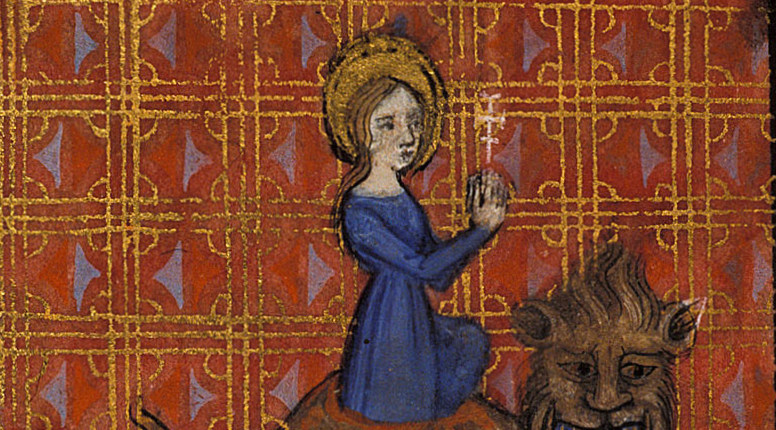 Detail of a miniature of Margaret emerging from the dragon

Bridget of York is the elusive youngest daughter of Edward IV and Elizabeth Wydeville. Born in 1480 at Eltham, Bridget was likely named after St. Bridget of Sweden. St Bridget is mentioned in Cecily Neville’s household ordinances which detail her daily routine including the religious readings she listened to during dinner. 1 Cecily may have suggested the name or Edward and Elizabeth may have named their youngest after one of Cecily’s favourite saints to honour her. Bridget was christened the day after her birth with her eldest sister Elizabeth and her grandmother Cecily serving as godmothers. An account of Bridget’s christening survived and was reprinted in the Gentleman’s Magazine in 1831. 2 It notes that The Countesse of Rychemond did Bere the Princesse…My lorde Marques Dorset Assisted her…My lady the Kinges Mother, and my lady Elizabethe, were godmothers at the Fonte. Yes, the Countess of Richmond probably later adopted the title My Lady the King’s Mother due to Cecily’s influence.

Very little is known of Bridget’s short life. At the age of ten she entered England’s only community of Dominican nuns, or ‘ Sisters of the Order of St. Augustine according to the institutes and under the care of the Friars Preachers‘, at the priory of Dartford in Kent. The foundation of such a house was envisioned by Queen Eleanor of Castile but it took many years for it to come to fruition. Edward II attempted to carry out his mother’s wishes but was deposed before he could do more about it, and it took Edward III until 1346 to establish the priory.

Bridget entering the priory led to speculation that she suffered from a mental or physical disability, which may be the case. Edward and Elizabeth had many children, however, and perhaps Bridget had always been intended for the church. There is only a single public appearance recorded after she entered Dartford, at the age of twelve she attended her mother’s funeral, accompanied by her uncle Dorset.

Cecily Neville’s will shows a great deal of thought. Besides the vast amount of possessions she bequeathed to family and friends and parish churches, her household and servants all received something ‘all other gentilman that be daily waiting in my household … every grome … every page … every yoman’. Her copy of the Revelations of St Bridget went to Anne de la Pole, Prioress of Syon Abbey, along with a jointly bound book of Bonaventure Infancia and Hilton’s Epistle on Mixed Life. Queen Elizabeth, Margaret Beaufort and Cecily of York all received psalters – Elizabeth’s bound in green cloth-of-gold with silver clasps, Margaret’s bound in black cloth-of-gold with gold clasps and Cecily’s in purple velvet with silver clasps.  To Bridget she bequeathed three books Also I geve to my doughter Brigitte d the boke of Legenda A urea in velem, a boke of the life of Saint Kateryn of Sene, a boke of Saint Matilde. 3

Perhaps Cecily felt a special fondness for her youngest granddaughter, now a fourteen year-old nun. We can assume Cecily’s Legenda aurea would have been a magnificent copy and Bridget certainly would have treasured it. Legenda aurea or Legenda sanctorum, The Golden Legend is a collection of the lives of the greater saints of the medieval church by Jacobus de Varagine. Legenda aurea became a medieval best-seller. William Caxton’s English translation was published during Richard III’s reign in November of 1483. At just under 900 pages on extra-large ‘royal’ paper the project proved so difficult and expensive that Caxton almost abandoned it. The earl of Arudnel, William FitzAlan, encouraged him to go on with the promise of purchasing several copies when it was completed and to pay him an annuity of a buck in summer and a doe in winter as some recompense.

The following illuminations are from  the earl of Arundel’s French copy of Legenda aurea, now held in the British Library, from 1382.