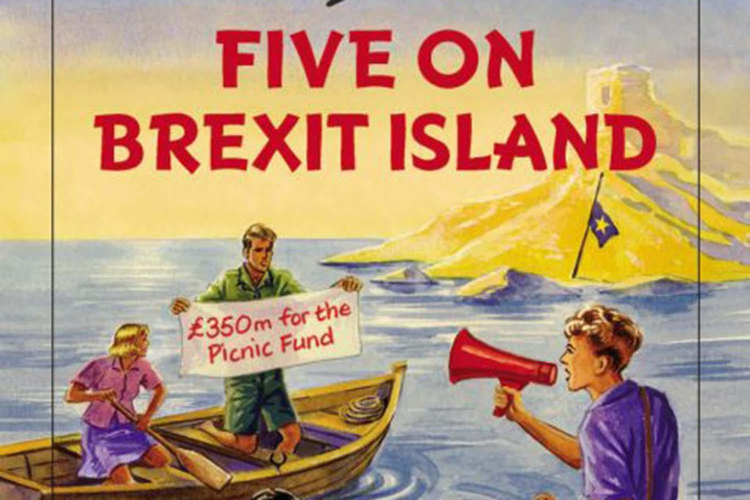 Enid Blyton for Grown-Ups – Five on Brexit Island and More!

Quercus is bringing out a Famous Five Parody series, Enid Blyton for Grown-Ups, this November. Grisly Tales from Tumblewater author Bruno Vincent is penning the series, which will include Five Go Dry January, Five Go Gluten Free, Five Go On A Strategy Away Day, Five Go Parenting; and Five on Brexit Island has just been announced.

Julian, George, Dick, Anne and Timmy will be reimagined grown-ups in four new stories in which they confront challenges of living without booze for a month, finding themselves on a puzzling “strategy away day”, attempt to find a good gluten-free cream tea, and, “most perilous of all”, prepare for parenthood!

It is the night of the referendum and the Five have retired to Kirrin Island to enjoy the fresh air and sunshine, fed up with the rancour of public debate. George is firmly a ‘remainer,’ whilst Julian, who is in the ‘Brexit’ camp, is tolerated on the grounds that Anne cannot bear to go camping without him. (Timmy, largely apolitical but not keen on cats or rabbits, joins them too.)
The night is tempestuous in more ways than one. George has managed to rig up a satellite link with the mainland so they can keep abreast of the news, and they sit huddled around the fire, amidst some tension, as George’s initial hope that the ‘remainers’ will triumph proves premature . . .
Meanwhile, a violent storm whips up. The damage is apparent as the new day dawns and George declares a new meaning for Brexit: Kirrin Island is exiting Britain. . . . that is until the red tape becomes too much of a challenge and their happy life together is under threat.

A spokesperson for Quercus Books said: “Quercus is really excited to be catching up with Enid Blyton’s The Famous Five as adults: their grown-up adventures will both remind older readers of the unbreakable bond between Julian, Dick, Anne, George and Timmy, and introduce newer readers to the spiffing time you can have with a few friends and a dog.”

Anne McNeil of Enid Blyton Entertainment, added: “We are thrilled that Enid Blyton’s iconic five are being reimagined for grown-ups. We are certain Enid Blyton would have delighted in the gentle parody of her characters – characters which have helped to create a multi-million-selling global brand.”

I’m not so sure that Enid would have welcomed this “gentle parody”, I suspect she might have had something to say about the Five going gluten-free.

Famous Five for Grown-Ups are available for pre-order 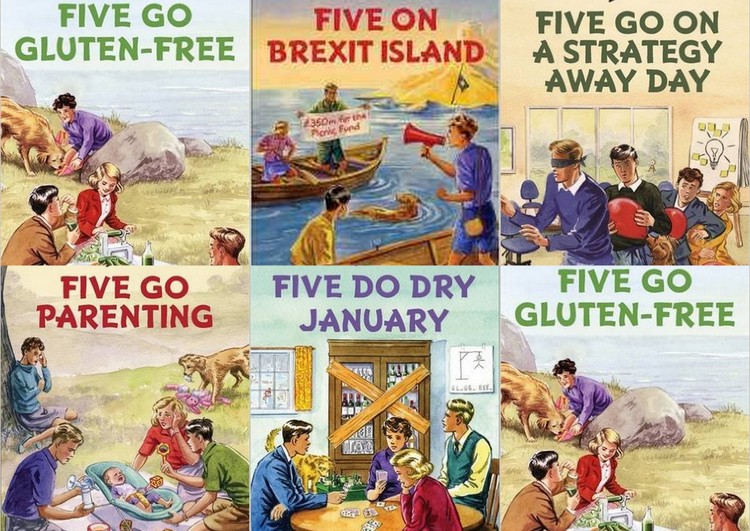