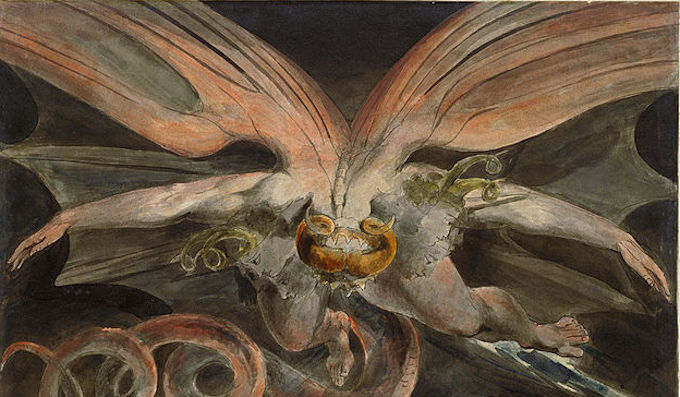 Dragons. Beasts wrested from our darkest subconscious which take flight in our highest dreams. In medieval times they were known for despoiling maidens. While largely symbolic, how exactly that worked should perhaps be left to the medieval imagination.

William Blake’s Great Red Dragon, from the Book of Revelation, is both man and beast. Satan reborn and for a brief while, triumphant in his earthly power.

J RR Tolkien’s Smaug is venal, vain, clever. Gold rather than virtue the treasure it both destroys and hoards.

George RR Martin wrestled with the fantasy cliche of dragons, and whether to even include them in Game Of Thrones. His beasts are savage, a weapon of war with a power kept barely under control by a magical connection to a dragon rider. We’re glad he won.

Anne McCaffrey’s Dragons of Pern, defied convention and tradition back in the 1960s when they were first conceived of; genetically engineered, with a telepathic link to their riders, they were noble, powerful creatures of science, not magic, their flight and fire served humanity rather than terrorized.

Robin Hobb’s dragons encompass a complex life cycle, a fraught metamorphosis from sea serpent to great powerful magical beings, inextricably intertwined with the ecology, the art, the culture indeed the evolution, the life and the magic of the people of The Realm Of The Elderlings. (From the Farseer Trilogy to the Liveship Traders, from Tawny Man to the City Of Dragons, this is a series I can’t recommend too much.)

Terry Pratchett’s dragons are the traditional proud, arrogant, superior monsters, existing only in another dimension, dormant, until brought forth from human imagination, from that ancient fear by human arrogance.

The Dragons created by Dan Reeder of Gourmet Paper Mache speak to both our fear and our arrogance. Paper mache heads mounted on wooden shields, do these hunting trophies represent the defeat of terror, sin, savagery? Or do they speak to our venality, our greed? Are we enobled by the destruction of a noble beast, by turning it into an object, a treasure that describes our arrogance?

Of course, this is just an amusement, a fantasy. You can watch an amazing timelapse of Dan’s creation below, visit Gourmet Paper Mache and consider; perhaps, in another universe, in a dimension created by the imagination of dragons, exists a monster, arrogant, ugly, savage. Does the dragon in his hall imagine the chase, the quarry, the hunt, and mounting the head of that beast as trophy above his mantle?