Monsters was the surprise genre hit of 2010, the first feature directed by special effects wiz Gareth Edwards. On a shoestring budget Edwards told the story of a photographer who has to get his boss’s daughter out of a disaster zone in the Mexican desert, an area plagued by monsters since a NASA satellite with samples from a comet burned up in the atmosphere above northern Mexico.

It combines elements of found footage, and a cinéma vérité style with 1950s creature feature tropes to tell a classic adventure love story. Something like a romantic road movie with a little of Apocalypse Now, The War Of The Worlds and hints of Salvador.

It’s a really engaging film, interesting on so many levels, from the narrative, to the visual, to the metaphoric with the added bonus of terrifically realized intense military battles against bizarre giant tentacled freaks. Well worth catching again if you haven’t seen it, and available on Netflix.

Monsters: The Dark Continent, directed by Tom Green, ramps things up to a new level of intensity. Ten years on from the events of Monsters, the ‘Infected Zones’ have spread worldwide. Two soldiers embark on a life-altering mission through the dark heart of monster territory in the deserts of the Middle East. By the time they reach their goal, they will have been forced to confront the fear that the true monsters on the planet may not be alien after all.

To mark the release of this much anticipated sequel, we’re giving away 5 DVDs and 5 Monster T-shirts.

Monsters: Dark Continent will be available on Blu-Ray, DVD and Digital formats from July 1st.

To win check out the trailer below, and tell us in the comments about your favourite classic 1950s creature feature atomic mutant monster or alien invader.

5 Winners will receive a Monsters: Dark Continent DVD and an exclusive Monsters T-Shirt! Entries are restricted to our Australian readers only, and close midnight, Friday 10th of July. 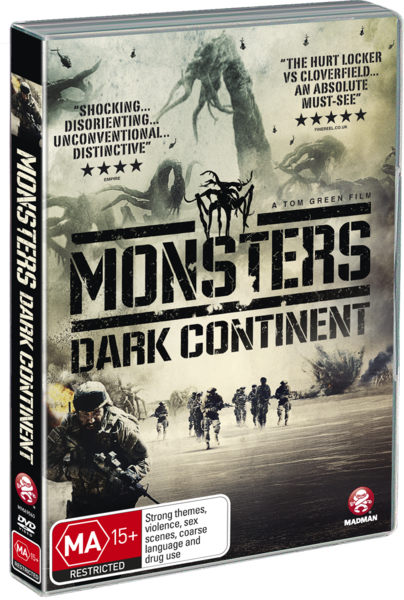