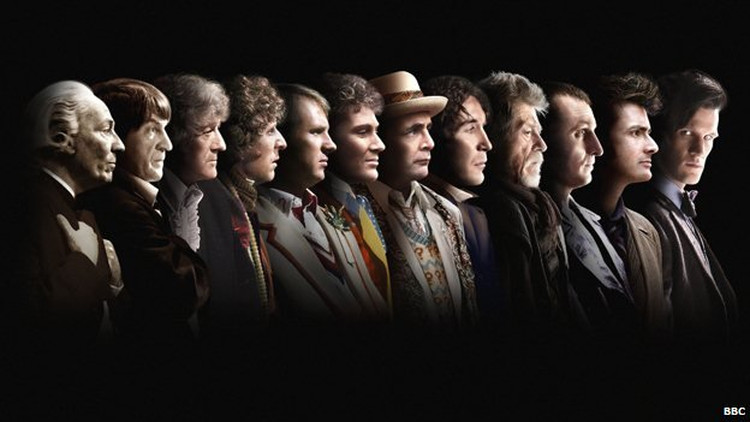 Doctor Who: The Day of the Doctor – What a Good Man Should Be

Bleary-eyed and exhilarated after a late-night marathon of classic Who and our 6.50 a.m viewing of The Day of the Doctor, we saw the 3D screening at the cinema in the afternoon. We were treated to a lecture from Strax, who showed us various cinema patrons in captivity after breaking cinema etiquette…turn your communications devices to silent!…and a welcome from Eleventh Doctor Matt Smith who was confused about which century he was in. The visual experience of viewing Doctor Who in 3D on the big screen was incredible. There was no gimmicky use of the medium (besides the chin joke in Matt Smith and David Tennant’s welcome), it only served to elevate the awesome special effects and plunge us into the universe on an entirely new level.

There were many nods to our past Doctors, especially the gorgeous opening scene, but the past Doctor we were all concerned with in this episode, the War Doctor, was portrayed with the sort of perfect subtlety we can expect from John Hurt. Hurt took us on a stunning emotional journey from the moment he made the decision to destroy his own race to save the rest of the universe from annihilation.

Billie Piper’s return to Doctor Who was not as Rose Tyler, but in the form of Bad Wolf. The Doctor has stolen a forbidden weapon, the Moment, or the “Galaxy Eater”. It was the final work of the ancients of Gallifrey, a weapon so powerful the operating system became sentient and it developed a conscience. “I chose this face and form especially for you,” she tells the Doctor. “It’s from your past…or your future I always get those two mixed up…I think I’m called Rose Tyler…no, in this form…Bad Wolf.”

While the Doctor wrestles with his decision, The Eleventh and Tenth Doctor finally meet in the sub-plot that weaves through the story. The Zygons make their return in Elizabethan times, going on to attack the earth in the present day. Joanna Page seems to channel a little of Miranda Richardson’s Elizabeth I, but with less ditz and a lot of cheeky charm. The story thread between her and the Tenth Doctor provides some lovely comedy relief in an otherwise tense and emotional story. We also saw the return of U.N.I.T and Kate Stewart, along with her gorgeously geeky daughter Osgood, sporting a Fourth Doctor-ish scarf and a Whovain obsessiveness we can all relate to.

The Tenth and Eleventh Doctor are convinced by Clara to follow the War Doctor to the moment of his terrible decision, and we witness a defining moment in the Doctor’s life, when he finally accepts this life that he has tried to forget, the ‘one who broke the promise’. And this time they will make the decision together.

Our Impossible Girl, Clara, proves again she is the Eleventh Doctor’s better half, imploring him to find another way. “We have enough warriors. Any idiot can be a hero,” she tells the Eleventh. “…be a Doctor.” In a spectacularly impossible plan, they they summon all of the Doctor’s incarnations to attempt to freeze Gallifrey away in a single moment in time, causing the planet to vanish from its’ current position and the Daleks to destroy themselves in the crossfire.

There was a resounding cheer in the cinema when we saw the Twelfth Doctor, Peter Capaldi, flash before our eyes. With gathering momentum we watched the thirteen Doctors from past and future, on the screens in the War Council room on Gallifrey working frantically to save their planet from destruction, culminating in a spectacular vision of thirteen TARDIS hurtling through space towards their home planet and ending in a blinding flash of light.

After an emotional farewell to the War Doctor, who begins to regenerate into the Ninth when he enters his TARDIS, and the Tenth Doctor’s exit -with much nostalgic sighing at his “I don’t want to go”-  it was our beloved Fourth Doctor Tom Baker that gave us the happy ending we had a right to expect. Gallifrey survived the Time War. The impossible plan worked. “You have a lot to do,” Tom Baker tells him. And now the Doctor has a new purpose. But our Eleventh is on his way to Trenzalor, we will bid farewell to him in a month’s time. It will be our Twelfth Doctor that takes us on our new journey.